Ashraf Alam is well known for his expertise and contributions in cloud and web technologies, especially on top of Microsoft .NET technology stack.

He is currently a part of the cloud platform team of Autodesk and building high performance secured services for its several millions of customers and users.

Prior Autodesk he was involved as one of the core contributors of Gumbuya, a cloud based IoT operating system and wrote its entire core services platform (i.e. The "Kernel") from the scratch.

Besides his professional engagements, his active participations in developer communities is remarkable, which includes popular open-source projects, hundreds of blog articles, technical speaking and judging engagements in top developer events such as Imagine Cup and developer conferences hosted by Microsoft.

For his huge positive influence in technical communities around the globe, Microsoft Corporation, a worldwide software giant recognized and awarded him as Most Valuable Professional (MVP) for 6 times.

So, what is synchronization? This is a process that ensures the same content among two participating entities, having different set of content possibly.

For instance, a database table, named Employee, which has two instance on two different databases, and exact same schema definition, after a synchronization process, both table will contact the identical number of data rows and column values.

In a synchronization process, there involves two participants, generally, termed as source and destination, where the content will be placed from source entity to destination entity.

Based on requirement and characteristics of data, the synchronization process can be categorized in two ways

a) Initial state: where both source and destination entity contains exact same number of records and column values.

b) Data change state: the state where data get changed in both source and destination entity. 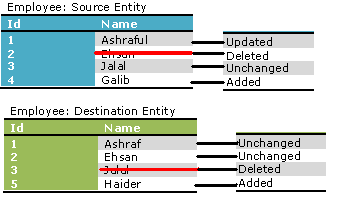 There is a high degree of data lost risk factors in unidirectional synchronization, as all of the data contents will be deleted in the destination entity, which don’t exist in source entity. In the above sample, #2 and #5 row item has been deleted due to data synchronization process. So, database administrators need to be cautious to confirm that if this data lose is expected.

In bidirectional synchronization, all of the rows and column values in source and destination entity will be merged data from both participating entities.

Learn with the help of EISK, how you can make your ASP.NET skill up to 300% productive in real-world software project, along with tons of fun and excitements.