Recently the Windows Phone Developer Team posted an article about how App Insights work and specifically how Free, Top, and New apps work. It’s all accurate, a good read, and (to an extent) will help you improve your app’s ranking in the Marketplace list.

However there continues to exist a few underlying problems with the Marketplace, specifically for independent app and game developers, that has yet to be fixed. This isn’t the first time someone brought this and I blogged about it over a year ago when the Marketplace had about 10,000 apps. There’s even a user voice item to show trial apps that you can vote on.

While I hate being a “this is broken” it seems that if you don’t call people out on things, they just let them linger and hope someone else fixes them. This is somewhat like the broken windows theory that breaking a few windows in a building and not repairing them leads to more disrepair which then spreads to other areas. The idea is to fix a broken window when you see it and keep things fresh and working. To me, most of these broken windows have been in the Marketplace since day one and in some cases, new ones have appeared since the launch of the web-based Marketplace.

This is probably the biggest issue, next to the XBox LIVE one below. When I visit the Marketplace on the web I see this listed for Apps: 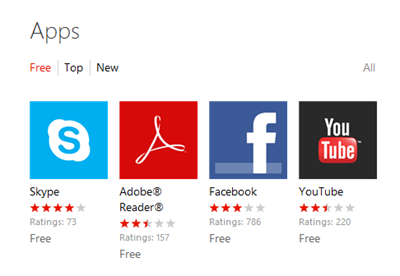 And here’s the home page listing for games: 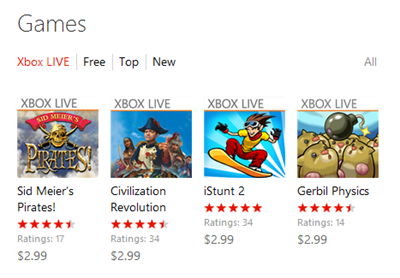 That’s all well and dandy but what if I click on the “Top” filter under Apps. This is what I see: 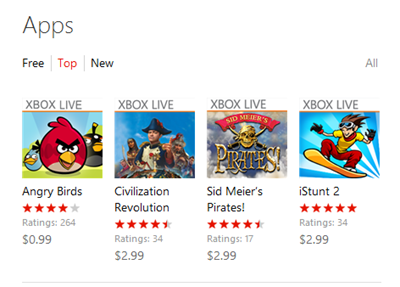 No, that isn’t a Photoshop with a mislabelled title. It really is the “Top” listing of apps.

Even though apps and games appear separated, they still get lumped together when you view the “Top” listing (because in the grand scheme of things, Angry Birds is way more popular than YouTube or Facebook).

To me this is wrong. Games have their own grouping. In fact they even have an entire page to themselves: 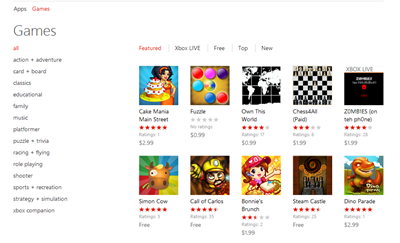 So why are they being lumped into the Top rankings for Apps?

It gets even worse when you click on Apps from the home page to view all of the app and their sub-categories then click on the Top listing for Apps: 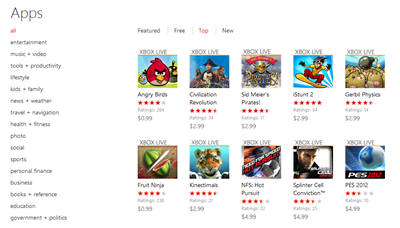 Yes, that’s the Top “Apps” in the all category. Is there a single app in that list? No, you have to scroll down (at least in my marketplace, every marketplace ranking is different) to the 12th icon before it’s an actual app (which is then followed by another 8 games before getting to the 2nd top app).

So basically “Top” apps and games is broken. Plain and simple. If you build a kick-ass app that rises to the top don’t hold your breath to hope it will appear in the “all top” listings because you need to climb above all the XBox live games first. With a separation on the site of Apps vs. Games, this is unacceptable.

Suggestion: If you go the distance to separate Apps vs. Games (like you have done) then go the distance and keep them separated. Don’t show me XBox LIVE titles when I’m asking for the Top Apps.

This brings us to the second most annoying “feature”. The Games section of the Marketplace offers a new “XBox LIVE” tab. This will filter out indie games and only show you ones that have been created by Microsoft and other studios for XBox LIVE (i.e. they get to participate in the official achievements and points system). 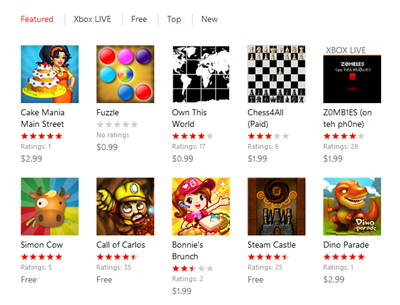 That’s great if you’re looking for an XBox LIVE title. Just click on it and boom, Bob’s yer uncle.

However why do I see this when I click on the Top games: 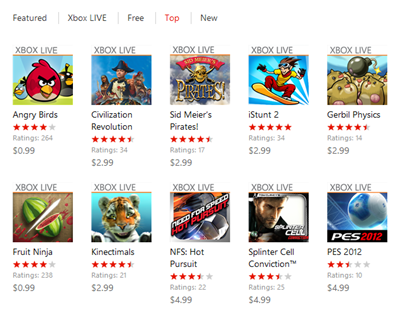 Unfair? You betcha. XBL have a tab of their very own and right now there’s only a few dozen titles. So why in the name of all that is holy are you injecting XBox LIVE titles in to the Free, Top, and New tabs?

Okay, I get it. How would you sort out XBL free, top, and new titles from each other? Fair question but since you have a tab of your very own for XBox LIVE why not go the extra distance and have a Free, Top and New tab or filter for just XBL titles.

In other words, an indie game developer has a snowballs chance in Hell of getting into the Top listing for games (or apps for that matter) when trying to face off against the juggernaut of Microsoft Game Studio titles. Of the *Top* 20 games in all categories, only 1 is a non-XBL title.

Suggestion: Please keep XBL titles out of the filtering from the rest of the games. If you give them a sandbox to play in like you did, then let them play there and stop peeing in our sandbox.

The third issue here is that of Trial visibility. Do you know how to see if an app or game has a trial version? Click on the details for each individual title and you’ll see it on the page under the price: 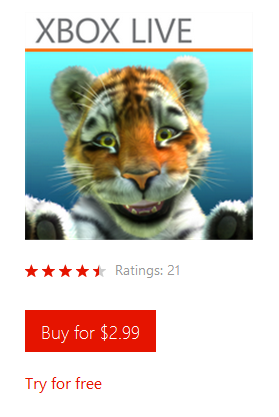 There it is. On Each. Individual. Page.

So trying to browse to see what’s a trial vs. not isn’t possible. The system knows they’re trials but they won’t tell you until you look at each individual one.

Suggestion: Include a Trial tab or filter or search box or something. Let us see what’s available as a Trial without having to drill into each title.

To me, the Marketplace is broken on a few levels and it’s difficult (if not almost impossible) for people to get visibility above the AAA titles. Here’s hopes that Microsoft might be listening again and perhaps look into it. If you don’t agree things are broken then just consider me the crazy white dude on the corner yelling about doom and gloom and move on. If you do agree, voice your opinion as comments, tweet this, blog about it, whatever. Lets see if we can instigate change.