Recently I had the pleasure of checking out @jeffwilcox’s newest app for the Windows Phone 7 platform called 4th & Mayor. It allows you to interact with the location-based platform called foursquare.

His app allows you to check in, take pictures, find friends, etc. Everything other mobile apps for foursquare do. In the design of the app, Jeff has really done a nice job on embracing and extending the Metro look and feel that’s prevalent on the Windows Phone 7 platform. 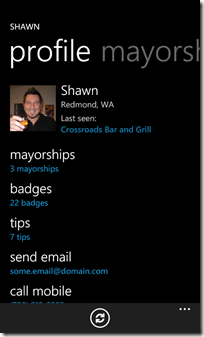 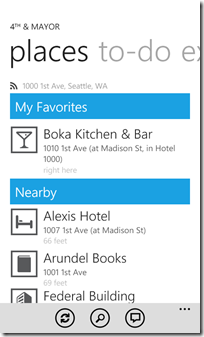 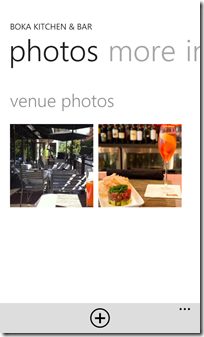 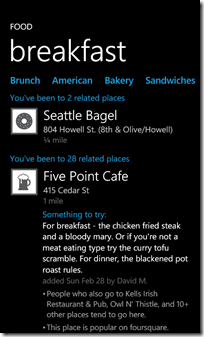 For me, I’m not even a foursquare junkie. I (still) don’t see the value in telling the world where I am at any given moment but I gave it a shot with Jeff’s app. Using his app I created an account, checked into a few places, and even became mayor of a few local hops (like the corner variety store, go me). I still think foursquare is silly, but 4th & Major made it fun for me.

Some key design features I saw in 4th & Mayor:

What’s Metro? Metro is the name of the new design language created for the Windows Phone 7 interface. It’s heavily influenced by Swiss print and packaging and focusing on simplicity. You can read up more about Metro here and review the Windows Phone 7 design guide that talks about specific controls and implementation here. 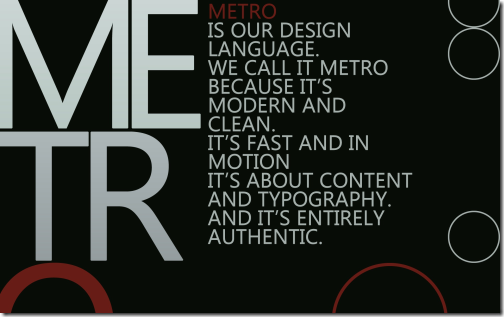 Since the release Jeff has also posted what he’s calling his Metro Design Guide. It’s a checklist (of sorts) that goes through the various aspects of the Metro design fundamentals and some things he’s sharing with everyone. It’s a great read and gets you into “thinking Metro” so I encourage everyone to check it out.

So where were we? Oh yeah. After playing around with 4th & Major and checking out a few other apps (like the Rock & Snow App out of the U.K. Marketplace) I thought it would be appropriate to give my simplistic Hamurabi game a facelift, Metro style. Little tweaks here and there just to clean things up a little. Here’s how I transformed the app to the next version.

The app is pretty basic. A pivot table with various sections for playing the app, getting help, etc. and one gameplay screen where all the action takes place. Here’s version 1.0 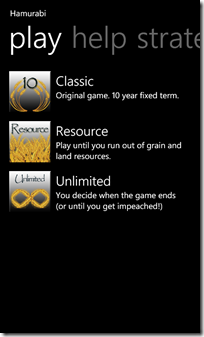 Bland and boring. The pivot control is the out of the box one. The gameplay screen is just a portrait page with some controls on it. I did do some styling in the first version around the slider control to make it a little better. I really didn’t care for the out of the box slider as my first test user claimed they didn’t know how to use it. So I just styled it with a round button with a little gradient background to make it more prominent. Yes, it looks a little like an iPhone control but there’s no real Metro equivalent and the default implementation sucks.

First up I went through the entire app and cleaned up the various offsets. In Jeff’s guide, the magic number is 12 pixels. I think I have engrained into my head now. 12, 12, 12, 12. And multiples of 12 are fine too, but by default regular text is indented 12 pixels from the edge of the screen. It’s a nice number so don’t mess with it.

As you can see from the screenshots above, I’m not completely consistent in my alignment and spacing. Text overhangs various places and isn’t consistent. Also the text on the home page doesn’t seem to stand out. It’s hard to tell the difference between the titles and the descriptions (they’re larger in size but I think we can do better).

If there were a Prime Directive when building an app for WP7 this might be it. Simplicity through consistency. Stick with known styles and numbers. The default spacing is 12 pixels and while you might need some more, try to keep with that number in mind. Keep your spacing consistent throughout your entire app as well as colours and fonts. I don’t mean use the same font everywhere but I do mean to not arbitrarily space controls on the design surface.

This idea here is that when a user is looking at one app, then flipping to another it shouldn’t be a jarring user experience. Your own app pages should be consistent in their font use and spacing as well. If everyone follows some simple consistent rules (both in and out of your app) then the user benefits. The experience is consistent and while you’re totally allowed to be creative, don’t overdo it. 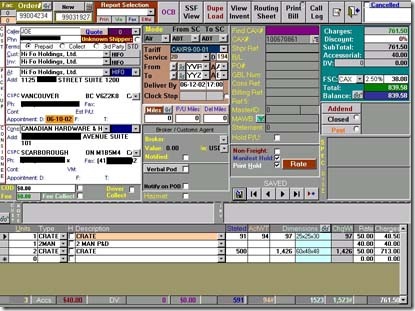 Here’s a Windows app that someone wrote which just goes to show that being unique isn’t the best experience in the world for the end user. Cluttered, multiple colours, multiple fonts. In a word, confusion just from an aesthetic sense (let alone the poor sucker who has to use this app).

Metro is like a design pattern. In software development we have all kinds of patterns. Patterns for separation of responsibility, patterns for accessing external data. If you can program it, there’s probably a pattern for it. The thing is with patterns think of them like sewing patterns. They provide a shape to cut out and some instructions on how to use them. You can follow them by the book and get a good result. It’s the people that take patterns and apply their own creativity to them that makes them stand out. This is the same with Metro. There’s no rule written in stone that says you have to use a specific font in a specific size for a panorama title. What the Windows Phone toolkit provides out of the box is a default implementation.

For example let’s take a look at the Panorama control. As I was cleaning up the Hamurabi app I thought it might fare better as a panorama control instead of a pivot. It’s a choice as to what control to use as the two are very similar but I follow a simple rule. If the data presented is different slices of a bigger list (for example filtered views of a large list) then a pivot might be more appropriate. If the screens are somewhat disjointed and don’t really go well together then a panorama might work. Again, no hard and fast rule here but I thought I would try a panorama control.

Here’s the default panorama control you get if you use the Microsoft template: 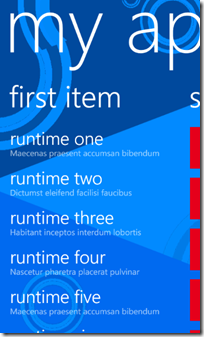 Simple and it works. Nothing special you need to do except replace the background image with you own.

For Hamurabi I didn’t want the harshness of the title that comes with the out of the box panorama control so I created a new style for the title and added it to the page: