David Starr from Scrum.org made interesting session in TechEd Europe 2012 - Implementing Scrum Using Team Foundation Server 2012. One of interesting things for me was how Cone of Uncertainty looks like in agile projects (or how agile methodologies distort the cone we know from waterfall projects). This posting illustrates two cones – one for waterfall and one for agile world.

Cone of Uncertainty was introduced to software development community by Steve McConnell and it visualizes how accurate are our estimates over project timeline. Here is the Cone of Uncertainty when we deal with waterfall and Big Design Up-Front (BDUF). 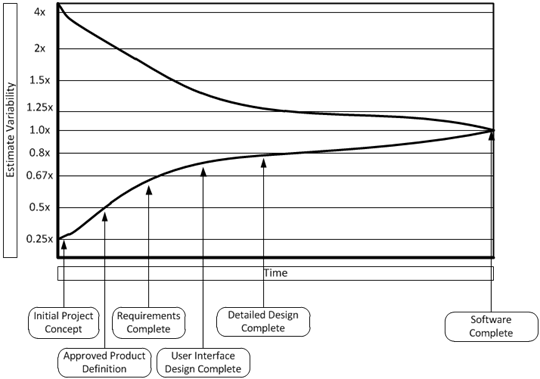 Cone of Uncertainty. Taken from MSDN Library page Estimating.
The closer we are to project end the more accurate are our estimates.
When project ends we know exactly how much every task took time.

This cone is inevitable for software development and agile methodologies that try to make software world better are also able to change the cone.

Cone of Uncertainty in agile projects

Agile methodologies usually try to avoid BDUF, waterfalls and other things that make all our mistakes highly expensive. Of course, we are not the only ones who make mistakes – don’t also forget our dear customers. Agile methodologies take development as creational work and focus on making it better.

One main trick is to focus on small and short iterations. What it means? We are estimating functionalities that are easier for us to understand and implement. Therefore our estimates are more accurate. As we move from few big iterations to many small iterations we also distort and slice Cone of Uncertainty. This is how cone looks when agile methodologies are used.

Cone of Uncertainty in agile projects.
We have more cones to live with but they are way smaller.

I don’t have any numbers to put here because I found any but still this “chart” should give you the point: more smaller iterations cause more but way smaller cones of uncertainty. We can handle these small uncertainties because steps we take to complete small tasks are more predictable and doesn’t grow very often above our heads.

One more note. Consider that both of charts given in this posting describe exactly the same phase of same project – just uncertainties are different.