My second trip was to DevReach with two stops. My first stop was at Bucharest where I met with my friend Dimitar Georgiev who is one of authors of Gym Realm service. Romanian MVP Andrei Ignat was our host there and organized meeting with local community guys. With me – it was first time in my life – was one more guy from Estonia visiting DevReach and he made the whole trip with me.

We arrived to Bucharest 29.09 at night. We stayed at Hotel Michelangelo. It’s small hotel with nice rooms, free WiFi and very good service. Although my room was on the first floor there was no street noise. We visited one restaurant that offers national cuisine and it was really great.

Next day we went out with local guys and had some beers in “old town”. Bucharest “old town” is nice and cozy. There are many bars open and I am sure everybody will find there some very okay place. After supper we visited one warm karaoke bar where we had beers with local guys.

Next day we had community event. I made my session about ASP.NET Web API and Dimitar told about how to port ASP.NET web applications to cloud environment. Sessions were held at study class of one local company. 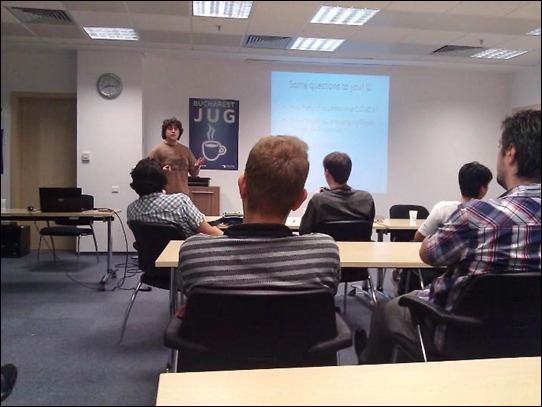 As it was usual community evening and not some bigger event there were about 12 guys attending from Bucharest. There were both IT-PROs and developers and one nice thing about Bucharest community is that they are listening to you very well and they ask questions if something is unclear or if you slide over from topic they are interested in. Okay, we tried to keep up good tempo so people stay awake and I think we succeeded.

After sessions we went all together to local Piranha pub that was near event venue. We had some beers with local guys and talked with them on different technology topics. It was another good and interesting evening at Bucharest.

I want to go back there for sure. As it was my first trip to Bucharest and mostly I gathered experiences I think my next community trip there will be way stronger. I take it as a challenge. Plus – I have there some new friends and I want to meet them too – be it community event or not. :)