Our next stop after Varna was Sofia where DevReach happens. DevReach is one of my favorite conferences in Europe because of sensible prices and strong speakers line-up. Also they have VIP-party after conference and this is good event to meet people you don’t see every day, have some discussion with speakers and find new friends.

Our trip from Varna to Sofia took about 6.5 hours on bus. As I was tired from last evening it wasn’t problem for me as I slept half the trip. After smoking pause in Velike Tarnovo I watched movies from bus TV. We had supper later in city center Happy’s – place with good meat dishes and nice service. And next day it begun…. :)

DevReach is held usually in Arena Mladost. It’s near airport and Telerik office. The event is organized by local MVP Martin Kulov together with Telerik. Two days of sessions with strong speakers is good reason enough for me to go to visit some event. Some topics covered by sessions: 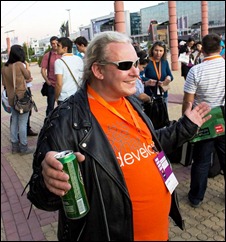 Practically everybody can find some interesting session in every time slot. As the Arena is not huge it is very easy to go from one sessions to another if selected session for time slot is not what you expected.

On the second floor of Arena there are many places where you can eat. There are simple chunk-food places like Burger King and also some restaurants. If you are hungry you will find something for your taste for sure. Also you can buy beer if it is too hot outside :)

Weather was very good for October – practically Estonian summer – 25C and over.

Here is the list of sessions I visited at DevReach 2012:

I missed some sessions because of some death march projects that are going and that I have to coordinate but it was not big loss as I had time to walk around in session venue neighborhood and see Sofia Business Park.

I will be there again next year and hopefully more guys from Estonia will join me. I think it’s good idea to take short vacation for DevReach time and do things like we did this time – Bucharest, Varna, Sofia. It’s only good idea to plan some more free time so we are not very much in hurry and also we have no work stuff to do on the trip. This far this trip has been one of best trips I have organized and I will go and meet all those guys in this region again! :)