Every time I try to create a database + tables + data for Windows Azure SQL I get errors.  One of them is 'Filegroup reference and partitioning scheme' is not supported in this version of SQL Server.'

It’s partly due to my poor memory (since I’ve succeeded before) and partly due to the failure of tools that should be helping me.

For example, when I want to create a script from an existing database on my local workstation, I use SQL Server Management Studio (currently v 11.0.2100.60).  I go to Tasks > Generate Scripts which brings up the nice Generate and Publish Scripts wizard.

When I go into the Advanced button, under Script for Server Version, why don’t I see SQL Azure as an option by now? The tool should be sorting this out for me, right? Maybe this is available in SQL Server Data Tools? I haven’t got into that yet. Just merge the functionality with SSMS, please. 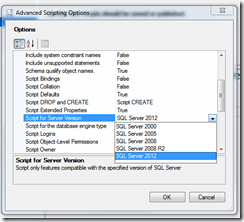 Anyway, I pick an older version of SQL for the target and still need to tweak it for Azure. For example, I take out all the “[dbo].” stuff. Why is it put there by the wizard? I also have to get rid of "ON [PRIMARY]"  to deal with the error I noted at the top.

Yes, there’s information on what a table needs to look like in SQL Azure but the tools should know this so I don’t have to mess with it.