At DockerCon this year, Mark Russinovich, CTO of Microsoft Azure, demonstrated the first ever application built using code running in both a Windows Server Container and a Linux container connected together. This demo helped demonstrate Microsoft's vision that in partnership with Docker, we can help bring the Windows and Linux ecosystems together by enabling developers to build container-based distributed applications using the tools and platforms of their choice.

Windows Server Containers create a highly agile Windows Server environment, enabling you to accelerate the DevOps process to efficiently build and deploy modern applications. With today’s preview release, millions of Windows developers will be able to experience the benefits of containers for the first time using the languages of their choice – whether .NET, ASP.NET, PowerShell or Python, Ruby on Rails, Java and many others.

The preview of our Visual Studio Tools for Docker, which enables developers to build and publish ASP.NET 5 Web Apps or console applications directly to a Docker container, has been updated to include support for today’s preview of Windows Server Containers. The extension automates creating and configuring your container host in Azure, building a container image which includes your application, and publishing it directly to your container host. You can download and install this extension, and read more about it, at the Visual Studio Gallery here: http://aka.ms/vslovesdocker.

Once installed, developers can right-click on their projects within Visual Studio and select “Publish”: 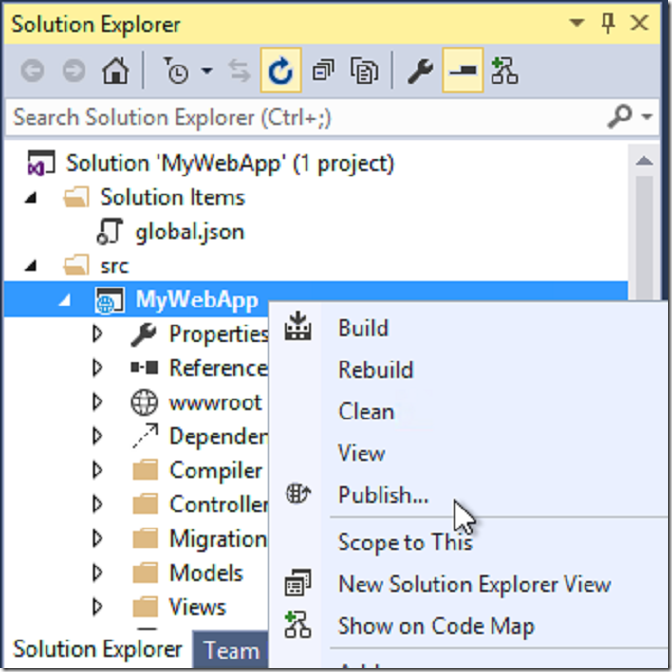 Doing so will display a Publish dialog which will now include the ability to deploy to a Docker Container (on either a Windows Server or Linux machine): 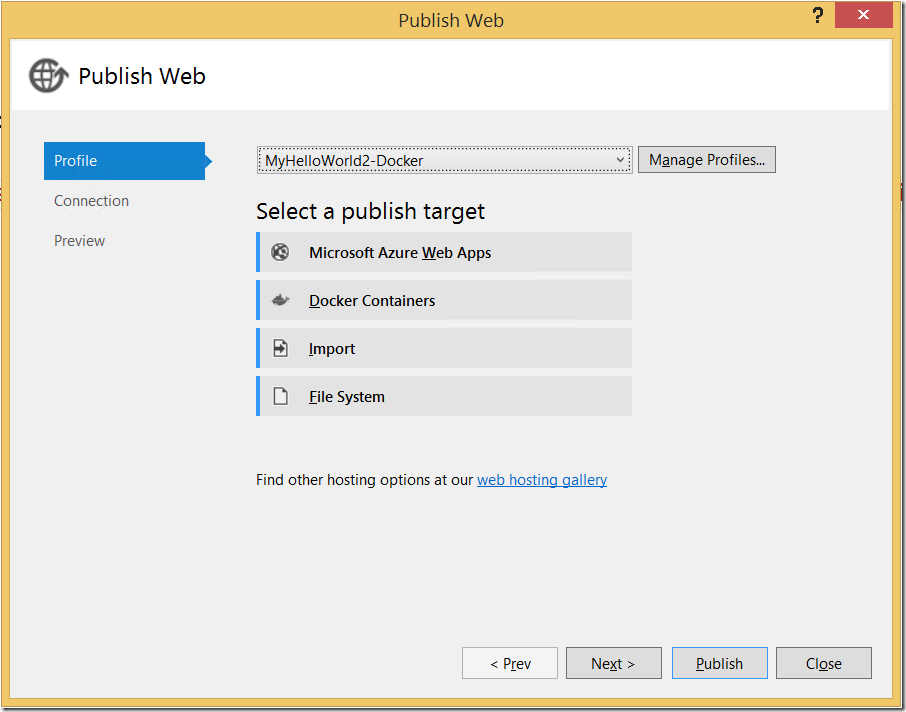 You can choose to deploy to any existing Docker host you already have running: 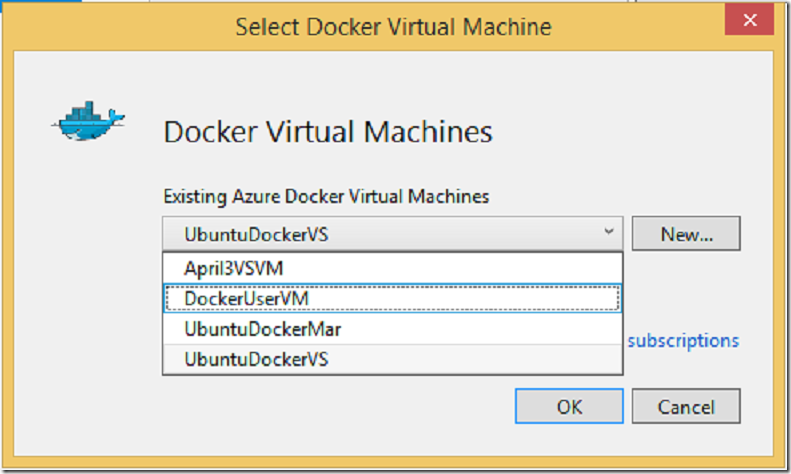 Or use the dialog to create a new Virtual Machine running either Window Server or Linux with containers enabled.  The below screen-shot shows how easy it is to create a new VM hosted on Azure that runs today’s Windows Server 2016 TP3 preview that supports Containers – you can do all of this (and deploy your apps to it) easily without ever having to leave the Visual Studio IDE: 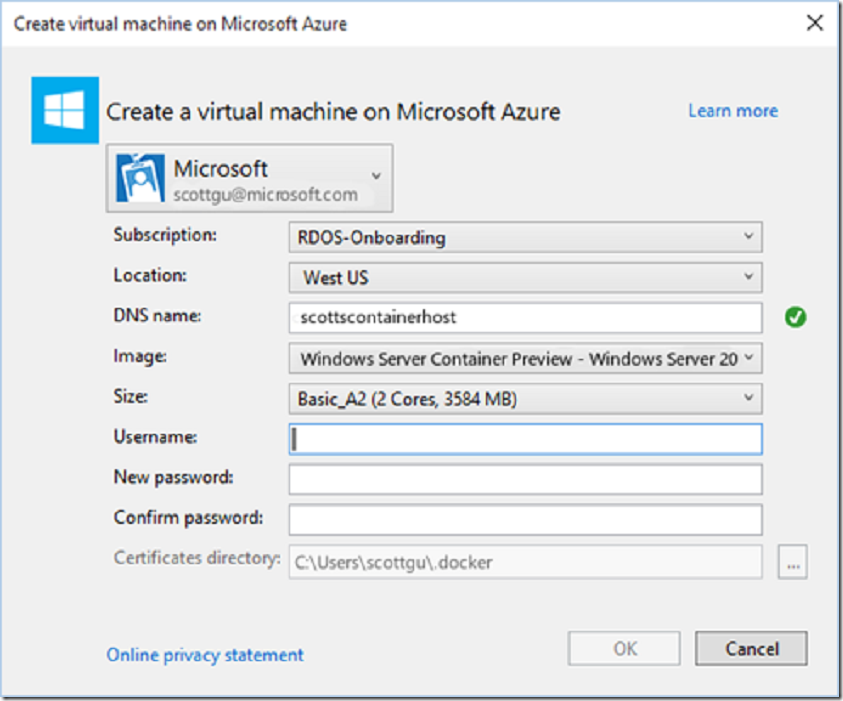 Directly from the Azure Marketplace, users can now deploy a Windows Server 2016 virtual machine pre-configured with the container feature enabled and Docker Engine installed. Our quick start guide has all of the details including screen shots and a walkthrough video so take a look here https://msdn.microsoft.com/en-us/virtualization/windowscontainers/quick_start/azure_setup. 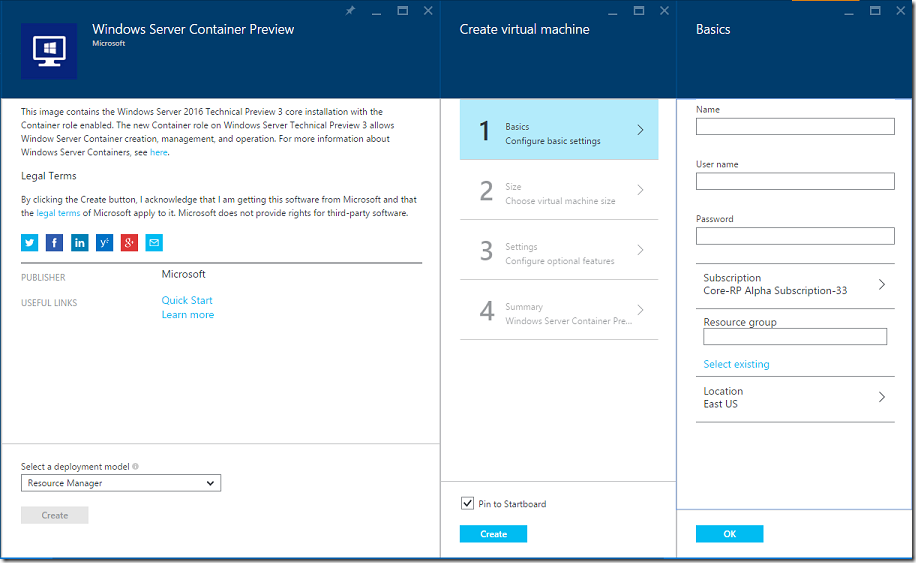 Once your container host is up and running, the quick start guide includes step by step guides for creating and managing containers using both Docker and PowerShell.

Creating a virtual machine on your local machine using Hyper-V to act as your container host is now really easy. We’ve published some PowerShell scripts to GitHub that automate nearly the whole process so that you can get started experimenting with Windows Server Containers as quickly as possible. The quick start guide has all of the details at https://msdn.microsoft.com/en-us/virtualization/windowscontainers/quick_start/container_setup.

Once your container host is up and running the quick start guide includes step by step guides for creating and managing containers using both Docker and PowerShell. 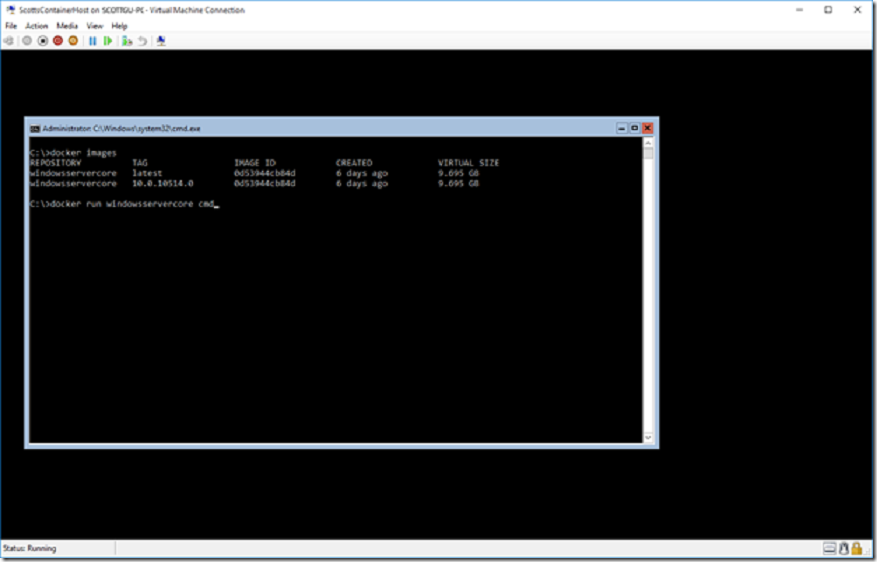 A great list of resources including links to past presentations on containers, blogs and samples can be found in the community section of our documentation. We have also setup a dedicated Windows containers forum where you can provide feedback, ask questions and report bugs. If you want to learn more about the technology behind containers I would highly recommend reading Mark Russinovich’s blog on “Containers: Docker, Windows and Trends” that was published earlier this week.

At the //Build conference earlier this year we talked about our plan to make containers a fundamental part of our application platform, and today’s releases are a set of significant steps in making this a reality.’ The decision we made to embrace Docker and the Docker ecosystem to enable this in both Azure and Windows Server has generated a lot of positive feedback and we are just getting started.

While there is still more work to be done, now users in the Window Server ecosystem can begin experiencing the world of containers. I highly recommend you download the Visual Studio Tools for Docker, create a Windows Container host in Azure or locally, and try out our PowerShell and Docker support. Most importantly, we look forward to hearing feedback on your experience.