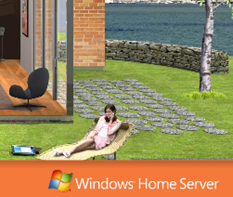 In what can only be considered one instance in a series of examples, I saw this story today on TechCrunch that featured yet another new Microsoft promo site built with...wait for it...you guessed it: Flash. Today's culprit is the Microsoft Home Server division, which has built a beautiful Flash promo site showing you all of the unique ways you can use Home Server in your house. Nothing too fancy. A few buttons. Some video. A few animations. Nothing that a designer with designer tools like, let's say Blend, shouldn't be able to do with Silverlight 1.0. Right?

This latest example of Microsoft (and let's be fair, it's whoever is on the marketing side of life- not the DEs or technical people) using Flash to do what Silverlight is supposed to be able to do is not helping convince critics to adopt the new platform. Among the other high profile Microsoft Flash sites are DefyAllChalleneges (ironic), Sync, MSN Video, and Hey Genius.

I have had several conversations with people in the Microsoft universe much more powerful and influential than I, and the common thought on these Flash sites is this: if Microsoft really wants Silverlight to succeed, can't they pay some design firm to build one of these promo sites in Silverlight? After all, Silverlight with its Expression workflow is supposed to be easy for designers to work with.

Granted, Microsoft is a large company and I understand it takes time to role out new technologies and standards to all divisions. And for most of their marketing stuff I'd buy that as a valid excuse. I fully understand that this is a marathon and not a sprint, even internally. But when sites targeted at developers like Defy are in Flash you've really got question the state of the Silverlight platform.

Does Microsoft believe in Silverlight? Their developer division most definitely does and they're doing a good job extolling the benefits of Silverlight in whitepapers and at conferences. I think Silverlight presents some very interesting opportunities for developers and I look forward to the plug-in install base growing so that Silverlight can be used on public sites. There is no question that it is a better tool for .NET developers looking to create interactive sites than Flash.

So let's be very clear: I like Silverlight and am rooting for its success. I've even written a Short Cut for O'Reilly media introducing people to Silverlight 1.1. I'd just like to see Microsoft make developers' lives a little easier and start doing all of its work in Silverlight so we can more easily get buy-in on this new technology. That's a fair request, isn't it?