My previous posting gave quick overview of code metric called Lines of Code (LoC). In this posting I will introduce you how to measure LoC in Visual Studio projects using Visual Studio Code Analysis and NDepend.

I have simple project to test how Visual Studio and NDepend calculate LoC. My project contains one class. There are only couple of lines of code but it is enough to demonstrate differences.

Before digging deeper I will tell you the results. Visual Studio LoC is 9 and NDepend LoC is 1. This difference looks huge but you will see that it depends directly on different measuring methods.

When I run Visual Studio code analysis I get the following table. 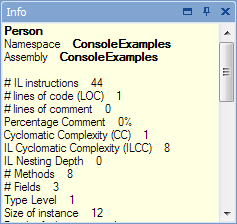 The results table generated by NDepend for Person class is shown on right. You can see that the number of LoC is 1. This is because there is one sequence point generated and it is for FullName property.

NDepend tells us also little bit more. If you look at the results window you can see that methods count for this class is 8 and fields count is 3. It is possible to get results similar to Visual Studio but you have to keep in mind that Visual Studio gives you approximate number, not exact one.

If you have a lot of automatic properties in your classes then the number of methods may be interesting when making first estimates (read my previous entry and warnings about using LoC as estimation method).

NDepend lets you also query analysis results. It has special query language called CQL that is similar to SQL. By example, this query returns all methods that have LoC greater than 15.

We can also write query for über-bloat methods.

As you can see syntax is very simple and after playing with queries for a while you are able to write them on the fly. You just have to know what code metrics are and how they are measured.

Measuring LoC with Visual Studio Code Analysis and NDpened are both very simple tasks to do. Visual Studio gives you a different results than NDepend due to different measuring method. If you need complete analysis of your code then NDepend is better way to go because it gives you lot more information than Visual Studio does. NDepend lets you also write queries based on LoC and it makes much easier to analyze your code.