Let’s start with analyzing the current model shown below. We can see that Album and Photo have some fields in common: Id, Title, Description and Visible. Currently these fields are duplicated to both tables. 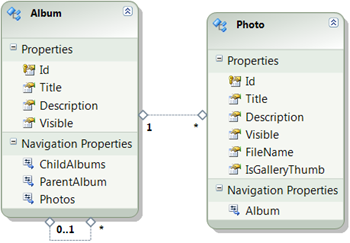 Photo Gallery. This is my current very simple model. I made this model so trivial
because it is easier to study new code stuff step-by-step.

I played already with UI a little bit and using separate classes is pretty painful. Also I know I want to add new class to model in near future – my camera is able to make some simpler movie clips and why not to store clips in same system. Clips class will be almost like Photo but there are some more attributes. Adding another class to model in the way Photo is there makes coding more complex. So we need generalization.

I created class called GalleryItem as generalization of Album and Photo. GalleryIitem generates ID-s when new gallery item is added. As you may notice the associations on the model are same as before. I don’t want to change them now because currently I have no reason to play them around. My new model is shown on the following image. 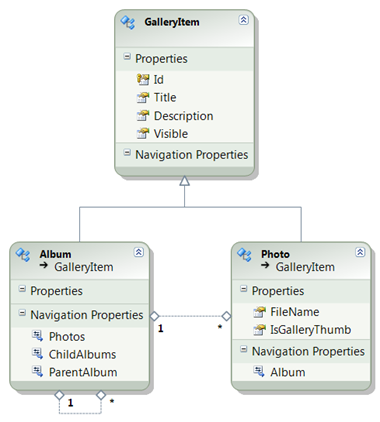 Refactoring existing model may be pretty hard headache on Entity Framework designer. It is still same raw and unstable as it has always been. No matter if you refactor existing model or create a new one, here are some guiding resources for you:

To get better idea what is going on take a look at my database diagram. It looks almost the same as my class diagram. Database diagram below shows how to relate tables for table-per-type inheritance mapping.

Due to these changes we have to modify also the source code of gallery. We have new class called GalleryItem and we have to change our custom context class MyGalleryEntities. Also Album and Photo have some changes. Let’s look at business classes first.

Changes shoul be pretty straightforward. Only thing that model before doesn’t reflect visually is that GalleryItem is abstract class. We cannot create instances of it but we can extend it.

MyGalleryEntities class has no more separate properties for albums and photos. There is one property that returns ObjectSet of GalleryItems. We have to base all our queries on GalleryItems collection. Now let’s see new version of MyGalleryEntities class. NB! Don’t forget these two mandatory lines in constructor. Without them your collection and object references are always null.

Here are some examples of queries against new MyGalleryEntities.

Now my gallery made through the first refactoring that touched database, model and source code. Everything works as expected and I can go on with other tasks on my gallery! :)