After building up my home network where XBox streams media from Windows Home Server using Windows Media Center I was very happy with my solution. Over weeks and months of active consuming of my media I found a lot of things that need to be improved or fixed. I am still happy but sometimes I’m looking already for alternatives. Here is my TOP5 wishlist for Microsoft people who build consumer media products.

Overview of my home network

This is overview of my home network. Here are shown only those devices that are used to consume multimedia I have in my Windows Home Server. 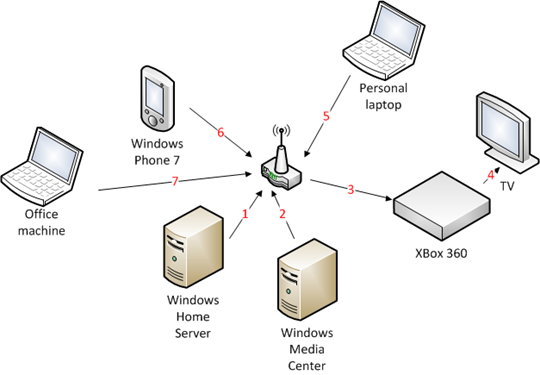 To give you better idea about my home network, here is a short description about every component:

I think you have now some idea what I built and how things are working.

First problem I faced when building my home media center was that Windows Home Server doesn’t run Windows Media Center. I like Windows Media Center although it is a little bit slow. But it still works very well for me. As I had no idea that there is such a legacy problem up I bought very usual home server box. There were also available very expensive boxes that have hardware powerful enough for real-time streaming but I thought it is something for professionals.

I looked for solutions to get Windows Media Center work on WHS but no luck. I even found no good hacks for that. Solution – let’s run virtualized Windows 7 Home Edition on WHS. And problem again – there is no Hyper-V role available. I installed VMWare player and installed Windows 7 Home Edition on it. It is dumb solution but it still works and it is way easier to set up that messing with Hyper-V server. I am not administrator and it probably takes me more time.

New version of Windows Home Server should include Windows Media Center. In the era of laptops and mobile computers there is no reason to expect that homes have usual desktop computers.

I thought that it is possible to create playlists like playlists for parties, family events, late night reading etc. It can be done with audio files but not with video files. Okay, there is one extremely stupid way to do it – create different folders and add hard links to video files because Windows Media Center is able to play contents of video folders. But this is not solution. It should be something I can do using Windows Media Player.

In this point I organized my music videos by DVD-s from where I ripped them and that was okay in the beginning. It is not enough right now.

I hope to see support for video and mixed playlists in next version of Windows Media Player, Zune, Windows Media Center or whatever it is that replaces them tomorrow.

Wish #3: Windows Media Center extender for XBox should support subtitles or provide easy way how to show what is currently playing

Now suppose I select my video folder from XBox and start play on root folder – there are about 800 music videos to play and there are a lot of artists. I don’t want to filter videos anyhow and it is very okay for me if videos are played in random order (remember, there is no support for video playlists yet).

One question that raises now is: who is the artist and what is the song? I have found no easy way in Windows Media Center how to get this information to screen. My video files have meta information but it is not shown to me when video is playing.

What I can do easily? Generate subtitle files programmatically. Windows Media Center is able to show me subtitles from my hard disk. XBox extender on the other hand knows nothing about it.

As video files are also getting more and more popular then they should be also treated similarly to audio files. Currently we get enough information about audio file that is playing in XBox. For video files I hope there will be setting that makes XBox show video file title on screen for some seconds.

I am not the only one who uses Windows Server 2008 as main operating system. I have powerful laptop that hosts some virtual machines with my development environments and I really need some powerful virtualization engine like Hyper-V. This far it has worked like charm for me and I don’t plan to switch to some other technology.

Hyper-V is the only advanced thing running on my host system. Other stuff is usual – MS Office, browsers, chat clients and other usual programs. I don’t want to install developer tools on my host system because I have clean virtual machines available if something happens. It is way easier to restore some crashed or dead virtual machine than installing everything to host system.

I hope that Microsoft will also focus more on stabilizing their products on other platforms besides usual desktop ones. I know that there is no point to make all desktop software work on server but I think that most elementary software should also work on server environments.

There are more wishes for sure as I go on and discover XBox, Windows Home Server and so on. But those five here are most burning ones.