Performance of algorithms is important topic if you want to write programs that work fast and doesn’t eat too much resources. In this example I will show you two implementations of famous Fibonacci numbers algorithm and let you compare how these two implementations perform. This posting will be also introduction to my next posting to keep it smaller and to keep focus on point.

You can read more about Fibonacci numbers from Data Structures and Algorithms with Object-Oriented Patterns in C#, chapter Example-Fibonacci Numbers.

Experienced programmers should see here two dangers. First of them gets clear to others at the end of this posting. Second of them is simple: recursive code is harder to debug than flat code.

The other implementation is not so short but it doesn’t call our algorithm again and again. It is also not so easy to read as first implementation.

Before I say anything else let’s compare performance of those implementations. 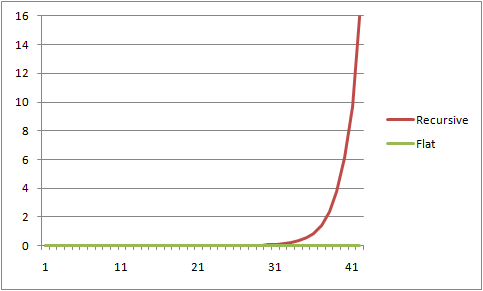 This example is good illustration why we must test all the implementations we have before making decision which implementation to use.

Update: Bart Czernicki asked in his comment about F# performance when using recursive calls. I tried it out and F# performs very well in this scenario. In F# you can use recursive calls without any problems as my tests showed me.