Pex and Moles is new testing and code analysis technology that is created by Microsoft Research. Pex is powerful tool that helps you analyze your code, detect error situations and generate parameterized unit tests. In this posting I will give you quick and illustrated overview of Pex.

For business use Pex requires MSDN Library subscription. For academic use it is free right now. You can download Pex and Moles from Pex and Moles homepage.

Pex generates unit tests to test your code on the fly. It analyzes paths in your code and checks for different constraints and tries different parameters with tests to break your code. Parameter values are not randomly generated but meaningfully selected. This means that Pex is not about flooding and finding bugs randomly. After code analysis and testing Pex shows you results in Visual Studio IDE.

Now let’s try to do something simple that illustrates how Pex works.

If you look at this class you can see that method Speed() is easy to crash – just give zero as value to argument t. Now let’s see what Pex thinks about our class.

To run Pex on our code we have to right click on project and select Run Pex from context menu. 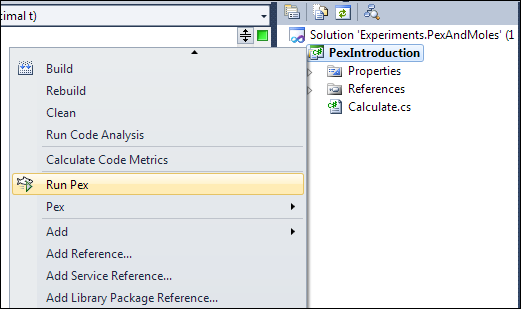 Now you are asked for test framework.

I selected nUnit but you can find also other frameworks there like Visual Studio tests and xUnit.

After clicking OK Pex starts analyzing and testing your code. It takes a little time so we have to wait a little bit.

If we click on some line the details pane is opened that gives us better overview about what Pex did in this point.

In details windows we can also see test that Pex generated if we open details section.

As we can see then Pex discovered one more problematic situation – our code is not safe against overflows. In similar manner Pex is able to analyze more complex methods and gives us very good hints about weak sides of our code.

Pex is interesting tool that helps developers on analyzing code and generating parameterized unit tests. Pex is not about replacing tests or making them less important. Pex is about providing additional value to developers who are interested in their code quality and unit tests. Tests will never go away and Pex is here to help us find more tests we need to have to improve our code quality. Also you may consider Pex as helping tool that helps us on generating tests we want to add to our test libraries.