During PDC10 Anders Hejlsberg announced Visual Studio Async CTP when speaking about new stuff in C# and VB.NET next versions. In this posting I will introduce the background of Visual Studio Async and I will provide you with links to different resources so you can get started immediately.

Smarter ones of you have also thought many times that there should be some patterns because what we are doing when writing asynchronous code that solves different problems has still some similarities. Slowly, step by step, we are now getting to the point where complexities of asynchronous code are solved by compiler and we can write asynchronous code almost like synchronous one.

How we got to Visual Studio Async?

When something new comes out it is always good to know some historical background to get better idea about what’s going on. Here is the timeline of C# and VB.NET.

To install and use Visual Studio Async your technical environment must meet the following requirements to operating system and Visual Studio:

After installer of Visual Studio Async is completed you get the following page opened. 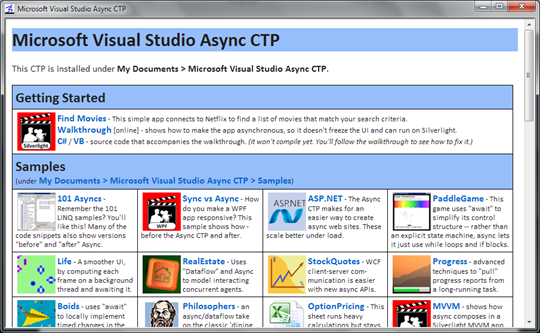 You can select examples, open them in Visual Studio and run them to see how they are written and how they work. I suggest you to start with example called 101 Asyncs. It illustrates you nicely how things are done on .NET 4.0 and how same things can be done on Visual Studio Async. Take a careful look at the following screenshot – there is Run Sample button. Yes, you can run all these samples right in the sample explorer. 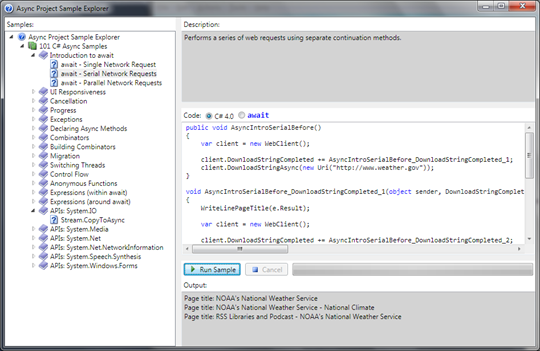 Let’s see now how is the same code implemented on .NET 4.0 and how it looks like on Visual Studio Asyc. .NET 4.0 version is here.

And here is the same code written on Visual Studio Async.

When you remove these WriteLinePageTitle calls the method body is about 5 lines and it is easy to read.