Hard to believe it’s been so long, but it was almost 4 years ago when I published Join the Dark Side of Visual Studio. That was when a lot of people were still using VS2003, and importing and exporting environment settings required a custom add-in, VSStyler, which has since fallen off the planet and is hard to find (link, anyone? Let me know). Three versions of VS later, and I’m still using and loving the dark side. Pleased, I am (haha). In fact, that article for one reason or another is still one of my most popular blog entries, thanks in part to a link from Scott Hanselman and a commenter on Coding Horror. I will point out selfishly that my article predates both of these :) But, yes, it’s sad when one of your top referrers is from a link in a comment on another blog. Not even the first comment, either.

That article even inspired someone out there to register a new domain: http://darksideofvisualstudio.net/

Now that Visual Studio 2010 is out, I decided to repost with my latest settings, exported from Visual Studio 2010. So here you go. It’s mostly the same as the original, but with some improvements. I lightened up some of the blues which are hard to read on some not-so-great monitors. Set the font to Consolas (though you may prefer Inconsolata). Also fixed a few neglected settings like the refactoring view and XML.

I should also point out that unfortunately, even in the new WPF based VS2010, you are very limited in what colors you can change in the environment itself, such as the Solution Explorer. However, there is a very nice add-in from the Visual Studio Platform team that lets you theme many aspects of the IDE that you can’t normally change. Not all, unfortunately, since not everything in VS is WPF yet. But if you use this in combination with the theme settings in windows itself, you can get pretty close to an all-dark theme in all windows. If anyone out there has success with this, please do share your exported theme settings from this add-in as well as your windows theme settings, I will be sure and update this article with the details.

Here’s a quick preview of some code from the AjaxControlToolkit: 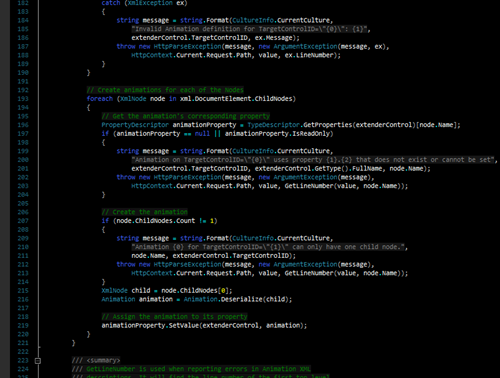 UPDATE: Rate the scheme on StudioStyles.info! The Dark Side of Visual Studio