In Microsoft Word I usually have the paragraph symbol turned on to Show Hidden Formatting Symbols (white space) so that I can clearly see spaces, tabs, and other white space characters. 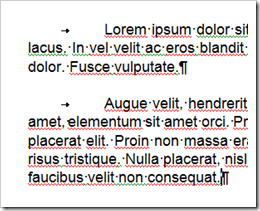 Up until recently I had no idea that Visual Studio had the same option to display white space.  Jeff Atwood’s recent blog post Whitespace: The Silent Killer had a screen shot on some code showing white space characters, so I hunted around in the Visual Studio toolbars for a little bit and found the option under the Edit menu. 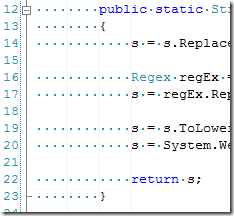 You can also use Ctrl+R, Ctrl+W to toggle it on and off.