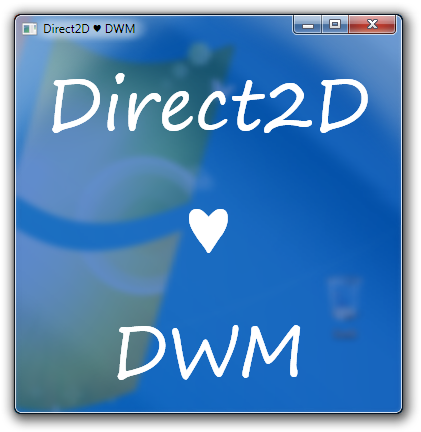 With the introduction of Windows 7 comes a brand new graphics platform for the application developer and that of course is Direct2D. So far MSDN Magazine has published two introductory articles I wrote about Direct2D. If you haven’t already done so please read Introducing Direct2D and Drawing with Direct2D. I’ll wait.

The upcoming December issue of the magazine will feature the next installment which covers some more advanced topics related to interoperability, but for now I thought I’d update the DWM saga for Direct2D as it’s just so simple. Whereas GDI barely tolerated the DWM, Direct2D just loves it.

Let’s say you just want to render the entire client and non-client area as a seamless sheet of glass and then use Direct2D to draw on top. Start by instructing the DWM to extend the frame into the client area as follows:

Now all you need to do is instruct Direct2D to use the same pixel format used when alpha blending with GDI, namely pre-multiplied BGRA:

The format is used when initializing the render target properties:

And that’s all there is to it. You can now render portions of your window with glass simply by using a brush or bitmap’s alpha channel. You might for example clear the render target before drawing as follows: