I am trying to encourage my team to get into Behavior Driven Development (BDD). So, I made two quick video tutorials to show how BDD can be done from early requirement collection stage to late integration tests. It explains breaking user stories into behaviors, and then developers and test engineers taking the behavior specs and writing a WCF service and unit test for it, in parallel, and then eventually integrating the WCF service and doing the integration tests. It introduces how mocking is done using the Moq library. Moreover, it shows a way how you can write test once and do both unit and integration tests at the flip of a config setting.

Doing BDD with xUnit, Subspec and on a WCF Service

Warning: you might hear some noise in the audio in some places. Something wrong with audio bit rate. I suggest you let the video download for a while and then play it. If you still get noise, go back couple of seconds earlier and then resume play. It eliminates the noise.

The next video tutorial is about doing BDD to do automated UI tests. It shows how test engineers can take behaviors and then write tests that tests a prototype UI in isolation (just like Service Contract) in order to ensure the prototype conforms to the expected behaviors, while developers can write the real code and build the real product in parallel. When the real stuff is done, the same test can test the real stuff and ensure the agreed behaviors are satisfied. I have used WatiN to automate UI and test UI for expected behaviors. 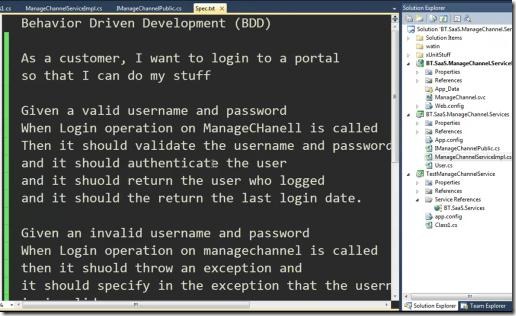 Doing BDD with xUnit and WatiN on a ASP.NET webform