This article describes an emerging open source specification, referred to as Owin – An Open Web Interface for .Net, what it is, and how this might be beneficial to the .Net technology stack. It will also provide a brief, concise look at how to get started with Owin and related technologies. In my initial investigations with Owin and how to play with it, I found lots of conflicting documentation and unclear ways of how to make it work and why. This article is an attempt to better articulate those steps so that you may save yourself lots of time and come to a clearer understanding in a much shorter time than I did.

Note: The code for this article can be download from here.

First, What is it?

Just in case you are not aware, a community driven project referred to as Owin is really gaining traction. Owin is a simple specification that describes how components in a HTTP pipeline should communicate. The details of what is in the communication between components is specific to each component, however there are some common elements to each. Owin itself is not a technology, just a specification.

I am going to gloss over many details here in order to remain concise, but at its very core, Owin describes 1 main component which is the following interface:

This is a function that accepts a simple dictionary of objects, keyed by a string identifier. The function itself returns a task. The object in the dictionary in this instance will vary depending on what the key is referring to.

More often, you will see it referenced like this:

This is essentially how the “environment” or information about the HTTP context is passed around. Looking at the environment argument of this method, you could interrogate it as follows:

if a HttpRequest was being made to ‘http://localhost:8080/Content/Main.css” then the output would be:

In addition, while not part of the spec, the IAppBuilder interface is also core to the functioning of an Owin module (or ‘middleware’ in Owin speak):

The IAppBuilder interface acts as the ‘glue’ or host to bring any registered Owin compatible libraries/modules together.

So what? I can do that now without Owin.

Okay so it may not look ground breaking, but this is the core of Owin and key to understanding what it offers. Since we have a basic understanding of the how, I am going to jump to what it currently offers as a result of supporting this mechanism. With support of this simple mechanism, I can now write isolated components that deal with specific parts of functionality related to Http requests. I can then chain them together to build capabilities of my Http server. Internet Information Server does not need to get a look in. You can literally chain together Owin components to form a pipeline of only the necessary features you want. In addition, the components I write do not have to have specific references to any particular pipeline component, and yet can still take advantage of any Owin compatible component.

Basically you can build or use a custom host, then you can insert whatever custom modules into the Http request processing pipeline. Owin provides the specification for writing those modules that make it easy to insert into the chain.

Internet Information Services comes with a plethora of pipeline and request handlers, management functionality, knobs, dials and features that make a comprehensive web server. However many people want a lean, cut down web server with only the features they want. This provides a much leaner pipeline that can provide great performance, in addition to only providing the feature set you want, meaning a smaller surface area which can be beneficial from a complexity and sometimes a security perspective. 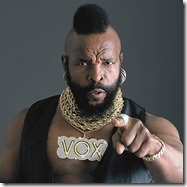 Yes yes, I will, but first, a diagram illustrating the previous paragraph. As already mentioned, Owin is just a specification of what interface to expose and how to work with that interface.In order for modules written to the Owin spec to be functional, they must exist in a host. So at a conceptual level, Owin compared to Internet Information Server looks like this:

Since we have an empty Owin host, we can programmatically add Owin compatible modules based on only what our needs are as illustrated below: 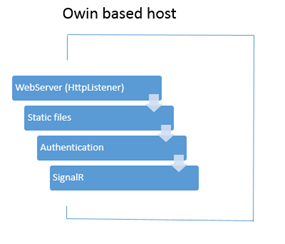 The diagram above shows an Owin host with 3 modules registered to be used, Static files,  Authentication and SignalR.

(Note: SignalR is a popular real-time web messaging/connection library and has been written as an Owin compatible module)

Are we there yet?

That is actually all you need to write an Owin compatible library. Strictly speaking, you don’t need the reference to the Owin nuget package but we will make use of that in the next part. All this module does is write out the contents of the request path to the trace output for each request that comes in. All we need to do is examine the environment that is provided to us through the environment variable.

However, we have a module but nothing to host it in and no way to tell it to be included as part of a web server pipeline. We need an Owin capable host that loads our module and houses the running code. We also need to programmatically configure that host to include our module. Much like Internet Information Server acts as the host for most web apps in .Net..

So, we are going to add a web project to our solution which will act as the entry point, allowing us to configure a module for use in the web request pipeline.

Here you can see we are using an instance of IAppBuilder passed into our configuration method to tell the host to ‘Use’ our custom pipeline component, often referred to as ‘Middleware’ in Owin speak.

Owin components use conventions for easy configuration, so when the Owin host starts up and loads our assemblies, it looks for the Startup class, and also a ‘Configuration’ method which accepts an IAppBuilder instance, and calls that, providing the instance.

The final piece of the puzzle

Ok, we have our custom pipeline component, our middleware, and we have an entry point where we can build or configure our pipeline. We need a host process to load these assemblies and invoke them with the requisite information.

This is where Project Katana comes in. Katana is a Microsoft written generic Owin host. You can go grab the source of this project, compile and run it, but it is easier to just install it so you can call it from the command line. By far, the easiest way to do this is to install a tool called ‘Chocolatey’ which is like a Nuget package installer but for windows binaries.

(Side Note: Chocolately is an awesome tool. If you get nothing else from this post, just use Chocolately to install some software and keep it up to date. It is easy to use and has a heap of applications supported.)

Once its installed, from the command line, simply type:
cinst Katana –pre

And Katana will be magically installed. Now opening up a command line/console window and typing ‘Katana’ will load and run the Katana application, which is our Microsoft written Owin host. Nothing will get loaded because we haven’t specified anything, but that is what is next.

We have written our custom Owin component, we have created our web application entry point used to configure our Owin pipeline and we have installed our host application, Katana, to glue it all together. So lets see in action.

First we need to tell our web project to NOT automatically use the current page when starting up. Rather, we want it to startup the Katana host, and tell Katana to use our assemblies. To do this:

For clarification, the things you need to enter are:

Ensure the ‘Start External Program’ is selected and enter the full path to the Katana executable. I installed to the default location using Chocolately so mine is set at:

Set the command line arguments to:

This represent the port number of 8080 and enabling verbose mode

Enter the working directory where your web project is located. In my case it was:

Now remember, the only component we have injected into the Owin pipeline is our own custom logging component. Since we have included the Microsoft.Owin.Host.HttpListener package into our project, that assembly also gets included in the output. When Katana executes, if no specific Http server is defined, it will automatically look for the Microsoft.Owin.Host.HttpListener assembly and use that.

All that work, for that?

Yes, but now we have everything in place to easily add other components in the pipeline. In addition, now you should have a reasonable understanding of the various pieces at play.  Remember, we have created a custom web server that only does exactly what we want it to.So conceptually, what we have created looks roughly like the following: 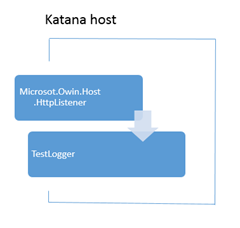 Add the following method block to your ‘Startup’ class in the web project in your solution:

Then add this line of code as the last line in the ‘Configuration’ method within the ‘Startup’ class.

You should see a response in the browser similar to the screen grab shown below:

That code we added in the Invoke method, did the following:

In order to use the code in the Invoke method, we needed to tell our pipeline to use it. This was achieved in the Configuration method via the line:

This simply injected the delegate for our Invoke function into the pipeline. So now our comceptual pipeline looks like this: 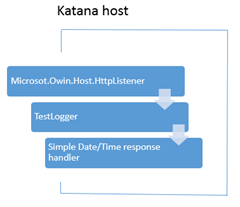 All without any real dependencies and in a relatively small amount of code.

And you made it

After all that, you can finally see how composable and modular the Owin concepts and architecture are. There are quite a few Owin compatible middleware modules out there such as SignalR, FubuMVC, NancyFx to name a few. These can be added to your pipeline and you then have the power that each brings at your disposal.

This is just the beginning. Imagine being able to easily build a custom web server with only the capabilities you need. An open, composable and modular world with no lock in. Sounds good to me. Hopefully the Owin concepts and goals are a little clearer now.

Remember, the code for this article can be downloaded from here.