Recently I've been studying RPG II for the Infinite 36, an old IBM programming language that was designed for 80 column punchcards. RPG II is probably the most horrible programming language that man has ever devised. Sometimes your code is a single character which has to be in an exact column. There is also a fixed logic that you have to work around. But it is the matter of getting a character in the right column that gives me a pain. The Infinite 36 is an old emulator of the IBM System 36 for the PC. It has some green screen RPG editors but I prefer to use UltraEdit.

I have used ASP.NET to write an utility to help me troubleshoot my RPG II code. The utility web page displays the code in a HTML table with 80 columns. I added some cryptic ruler lines to help me figure out what some of the columns are used for. These ruler lines are based on a few old RPG code editing tools that used these ruler lines. I have a MS-DOS program for editing RPG code which uses such ruler lines.

I added a semi-transparent floating row of numbered columns to overlay the table. As I scroll down the page the numbered top row is no longer visible so I used the jQuery floating div plugin to make it float. In addition, I gave all the table cells a title with their cell number so I can mouse over a table cell to see its position.Click on the thumbnail image below to see a larger image. 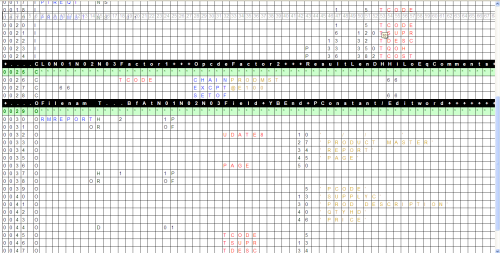 In addition to the the column numbers and cryptic rulers, I added some syntax highlighting. All of the single character codes make syntax highlighting impractical but file names, fields, edit words, and calculation operators and factors can be color coded. Here is the link to the download for my RPG Code Viewer.

The only thing I like about RPG II programming is that it is very obscure. Some day I may charge $200.00 an hour for RPG II work to compensate for the aggravation. There is plenty of opportunity to create tools for RPG II programming because there is very little available. I did find an Excel spreadsheet designed as a printing spacing chart. I also bought a RPG II ruler which is a metal ruler that you can use to check the columns in a RPG source code printout.