Moq takes advantage of recent VB.NET and C# language features such as lambdas and generics. When creating mock objects with Moq, you use lambda expressions to represent the methods and properties that you want to mock. The emphasis on lambdas enables Moq to provide a very clean syntax for representing expectations, parameter constraints, and return values.

According to the authors of Moq, you can pronounce “Moq” either like “Mock-You” or like “Mock”. The name “Moq” comes from a combination of Mock and Linq. Since Moq uses lambda expressions and not Linq, the name “Mambda” might have been more accurate.

Some Background, Some Philosophy, and Some Controversy

Some people have criticized Typemock Isolator for being too powerful. The criticism is that TypeMock Isolator might encourage bad software design because it enables you to be lazy about the architecture of your code. The argument is that building mockable code should force you to write well designed code. Since Typemock Isolator enables you to mock anything and everything, the tool does not lead you down the virtuous path to code nirvana. Typemock Isolator is like giving a nuclear weapon to a four year old child.

In this paper, Fowler makes several distinctions. First, he distinguishes a stub from a mock. According to Fowler -- who uses Meszaros’ definitions here – stubs “provide canned answers to calls made during the test, usually not responding at all to anything outside what's programmed in for the test.” Mocks, on the other hand, are “objects pre-programmed with expectations which form a specification of the calls they are expected to receive”.

Fowler makes a final distinction between classical TDD and mockist TDD. This final distinction concerns the “philosophy to the way testing and design play together”. A classical TDDer tends to use stubs and state verification. According to Fowler, the “classical TDD style is to use real objects if possible and a double if it's awkward to use the real thing.” A mockist TDDer, on the other hand, almost always uses mocks and behavior verification. A mockist TDDer “will always use a mock for any object with interesting behavior.”

Moq has been criticized for not respecting the needs of both the classical TDDer and the mockist TDDer. Moq makes it easy to make stubs and not mocks. This is either a good thing or bad thing depending on what you want out of a Mock Object Framework.

Daniel Cazzulino, the primary author of Moq, is unapologetically a classical TDDer. There is a very interesting exchange between Daniel Cazzulino and Ayende (the author of Rhino Mocks) on this topic at:

Daniel Cazzulino argues that most developers, if they are using Test-Driven Development at all, don’t distinguish between classical TDD and mockist TDD. And, in fact, the distinction isn’t as clear cut as Martin Fowler describes. You can read Daniel Cazzulino’s paper, entitled Mocks, Stubs and Fakes: it's a continuum by visiting Daniel Cazzulino’s blog at:

Daniel Cazzulino does not use the Fowler/ Meszaros distinctions between mocks and stubs. He claims that most developers use the word “mocks” when referring to what Fowler/Meszaros would refer to as stubs and that we should respect the everyday language use of these words. Since this post in on Moq, for the remainder of this post I will knowingly and actively conflate mocks and stubs out of respect for Daniel Cazzulino.

Installing and Setting Up Moq

Moq is maintained as a Google Code project. You can download the Moq binaries and API documentation here:

After you download the Moq binaries from Google Code, make sure that you unblock the archive by right-clicking the file, selecting Properties, and pushing the Unblock button (see Figure 1). If you forget to do this, you run into confusing security issues when you try to use Moq within Visual Studio. 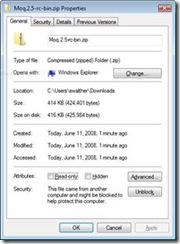 What Can Be Mocked?

You can use Moq to create mocks from both interfaces and existing classes. There are some requirements on the classes. The class can’t be sealed. Furthermore, the method being mocked must be marked as virtual. You cannot mock static methods (use the adaptor pattern to mock a static method).

These limitations are the same as the limitations you face when working with Rhino Mocks. Both Moq and Rhino Mocks use proxy classes under the covers. Indeed, both frameworks derive from the same Castle DynamicProxy code base.

Imagine that you are building a database-driven web application. Imagine, for example, that you are creating an online store. You want to concentrate on writing all of the business logic for your store before doing anything else. In particular, you don’t want to devote any time to writing your data access components before writing your business components.

This is a good situation to take advantage of a Mock Object Framework. In this situation, you can create an interface that describes how you want your data access component to look. Then, you can simply mock the interface and take advantage of the mock while testing your business logic. The mock enables you to avoid writing code until you are really ready to do it.

The first line of code creates the mock from the IProduct interface. The Mock class is a class from the Moq framework. The Mock class has a generic constructor that accepts the type of the interface to create.

After you create the mock newProduct, you can use the mock just as if you had actually implemented the IProduct interface. For example, the following Assert executes successfully:

The first line of code creates the mock by passing IProductRepository to the Mock class’s generic constructor. The next line setups the Get() method to return the mock newProduct. Notice that the Get() method call is represented with a lambda.

After you create IProductRepository mock, you can use it in your tests like this:

Notice that the It.IsAny<int>() constraint is passed to the Get() method when setting up the method expectation. This argument causes the mock Get() method to accept any integer value and return the newProduct object.

You can even specify fancy custom constraints by taking advantage of a lambda expression. Consider the following code:

This code returns the newProduct object only when the id parameter passed to the Get() method has a value between 0 and 6. This constraint is specified within a lambda expression passed to the It.Is() method.

Moq is Mockist Friendly (At Least a Little Bit)

The Moq framework can be used to perform limited behavior verification. For example, you can use Moq to detect whether a particular method was called at least once after calling another method.

When would you want to perform behavior verification? Martin Fowler provides the example of a memory cache. He writes “The whole point of a cache is that you can't tell from its state whether the cache hit or missed - this is a case where behavior verification would be the wise choice for even a hard core classical TDDer” (quotation is from Mocks Aren’t Stubs).

A ProductCache object is passed to the ProductRepository class through construction dependency injection. The ProductRepository GetProduct() method first attempts to grab a product from this cache object and, if it fails, it calls the Get() method to grab the product from the database. Notice that I haven’t bothered to implement the Get() method. That’s okay since we will be mocking it anyway.

The ProductCache class is a strongly typed wrapper around the normal ASP.NET System.Web.Caching.Cache object. The code for the ProductCache is contained in Listing 3:

Notice that both methods of the ProductCache class are marked as virtual. You must mark methods as virtual when you want to be able to mock them.

We can test whether the ProductCache is used correctly by taking advantage of Moq when creating a unit test. The unit test in Listing 4 demonstrates how to use Moq to perform simple behavior verification:

In Listing 4, the setup section is used to setup three mock objects: mockCache, mockProducts, and mockProduct. Next, in the expectations section, expectations are created that represent how the methods of these mock objects are expected to be called. Notice that all three expectations include a call to a method named Verifiable(). When the Verify() method is called at the end of the test, if any of the expectations marked as verifiable have not been called, then an exception is thrown.

The test in Listing 4 checks that the following expectations are met when the GetProduct() method is called:

· The ProductCache.Get() method is called

· The ProductRepository.Get() method is called

· The ProductCache.Set() method is called

In other words, when the GetProduct() method is first called, we want to make sure that the product being requested is added to the cache.

Again, it is important to emphasize the limitations of Moq here. You can’t use Moq to verify whether or not these methods were called in a particular order or a particular number of times. Moq is good at state verification and not behavior verification.

I like Moq. I like how Moq takes advantage of lambdas when building expectations. I find this aspect of the framework very intuitive. If you are a classical TDDer then I think that you will discover a lot to like in Moq.

If you need to mock objects that cannot be handled by Moq, such as static methods or sealed classes, then you should consider using Typemock Isolator. If you are working with legacy code, then you might not have the luxury of working with a well-designed, loosely coupled application. In that case, Typemock Isolator might be your only viable choice.

Finally, if you lean more towards mockist TDD than classical TDD, then you will find Rhino Mocks more appealing. Rhino Mocks provides a richer framework for performing behavior verification.