In late 2014 my good friend Peter Kellner approach me with a big idea – an idea that immediately caught my attention. He wanted to explore collaborating on a new conference idea that would highlight Angular and other “hot” Web development topics and wondered if I’d be interested in working with him and another friend of his named Kevin Nilson (who is also a good friend now) on a full-scale conference. I’ve been involved with chairing a lot of conference tracks over the years but never been the driving force behind organizing an entire conference. While the idea was definitely exciting it was also a little scary – at least initially.

After talking more with Peter and Kevin I decided to jump in and we’ve been working hard to put on a top-notch conference called AngularU (short for “Angular University”) that will be held in San Francisco from June 22 – 25, 2015. I’m really excited about the conference and thought I’d discuss some of the key reasons in this post.

The Web is Changing Rapidly

It’s no secret that the web is changing at a rapid pace. In fact “rapid” may be an understatement since in the time I’ve been writing this post I suspect several new JavaScript or CSS libraries have been released on Github. Keeping up with the pace of Web technologies can be a challenging proposition to say the least although for me personally I think it’s all part of the fun of working in this space. In my training classes I always tell people that, “If you’re getting bored you’re just not trying hard enough” since there’s so much to learn.

When Peter and I first discussed the concept of doing an Angular conference I thought about it more and realized that while focusing on Angular would be good, several other conferences were already doing that exact thing really well such as ng-conf (friends from the ng-conf event such as Aaron Frost and Joe Eames have even taken the time to provide us with a lot of excellent feedback).  I took a step back and thought about what web technologies I’d like to see included if I could create my own conference given the rapid pace of the web in general. After thinking about it more I decided that I’d want a conference that had Angular sessions (including Angular 2!) as well as sessions on TypeScript, ES6, and Web Components. I suggested that general concept to Peter and we agreed that providing more broad coverage of web technologies would be the overall goal of AngularU. As a result, the AngularU conference now has many talks lined up to discuss TypeScript, ES6, Web Components, CSS and more which should help attendees get a good understanding about the latest and greatest technologies out there.

There are a lot of conferences out there and many claim to have the “best speakers in the industry”. If I was going to be involved with a conference then I definitely wanted some of the top names and key players in the industry to be involved. Peter, Kevin and I decided that we wanted the Google team to give the keynote on Angular 2. Fortunately, we had a meeting with Brad Green and Igor Minar from the Angular team and they agreed to give the keynote. We’re really excited that Brad, Igor, and Misko Hevery have agreed to come speak! It’ll be great to hear about the latest updates on Angular 2 in June.

We didn’t stop there. With the big announcement about TypeScript and Angular we also wanted a top-notch person involved with TypeScript to come speak. As a result, the day 2 keynote at AngularU will be by Jonathan Turner, the program manager on the TypeScript team. We’re super excited to have Jonathan involved with the conference as well. We also wanted someone very well known in the JavaScript community to be involved who’s had a tremendous influence over the years on the JavaScript code most of us write today. We’re very excited to have Douglas Crockford coming as well to give a day 1 afternoon keynote to discuss his latest findings in the world of JavaScript!

In addition to the keynote speakers we also have many additional great speakers and experts in the industry such as John Papa (he and I will be giving a talk after the day 1 keynote), John Lindquist, Lukas Ruebbelke and many more. Check out the http://angularu.com site for a list of speakers (more are being added as we finalize talk selections). 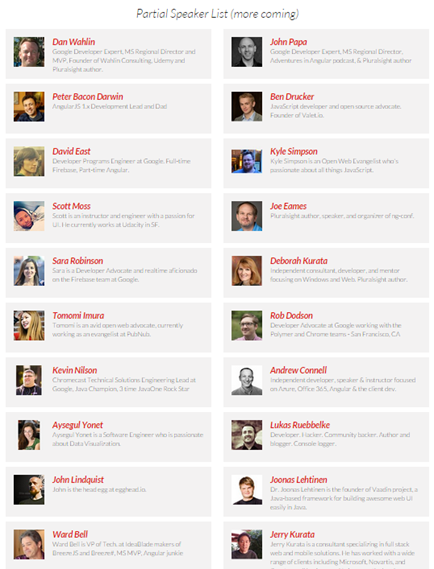 So what are some of the topics speakers will be covering at AngularU? Here are a few of the talks:

Check out the AngularU website to see a complete list of speakers and talks. We’ll be updating it with new talks and speakers in early April so check back often for the latest.

Have Fun While Learning and Networking

People learn best while they’re having fun and we plan to make AngularU a fun yet educational event. From the AngularU game room to the lunch and attendee party events, we have a lot of great stuff planned that will help people meet and get a chance to discuss all of the things happening with web development. In addition to the events planned for attendees, we also have a community night planned that anyone from the San Francisco area can attend and have other events to give everyone a chance to talk with the speakers and other experts who will be attending.

Come Join Us at AngularU in San Francisco!

We’ve come a long way from the initial call that Peter and I had about potentially doing a conference and are super excited about all of the great speakers and content that will be at the event! We hope that you’ll come join in the fun and learning at AngularU!

AngularU will run from June 22nd – 23rd at the Hyatt Regency San Francisco Airport hotel and conference center. Post-conference workshops will run on June 24th – 25th at the same location.