I haven’t been able to work on Window Clippings too much over the last month as I’ve been focusing on my day job as well as other projects such as a new column for MSDN Magazine starting next month. I am however planning the 2.1 release of Window Clippings and thought I’d quickly let you know what’s tentatively in store! As always your feedback is very much valued and helps drive the direction of this product.

This is mostly a minor release (as indicated by the version number) but there are a few new features/improvements that folks have requested. Check out the following screenshot illustrating the capture screen’s new context menu. 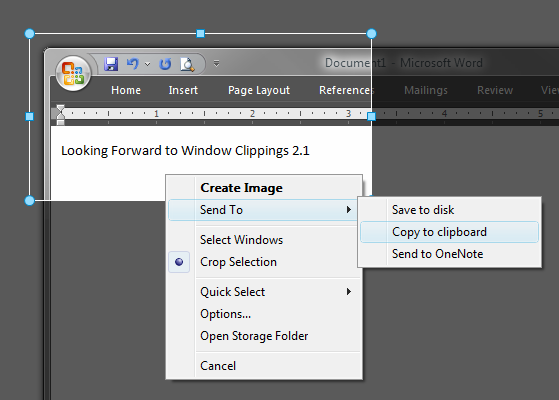 As you can see, I’ve added a few more convenience functions that folks have requested.

The new “Send To” submenu allows you to override the default action sequence and instead direct the captured image to a single “Send To” action. This is handy if you’re frequently needing to change the destination of your images and don’t want to reconfigure Window Clippings every time.

You should also notice the addition of “Open Storage Folder” that was previously only available from the notification icon’s context menu.

This release will also likely include a few more built-in add-ins. Currently I’m considering providing a built-in version of the “Add watermark” .NET add-in that I released as a sample add-in with source code. I’m also considering providing a “Send to Amazon S3” add-in that will automate the process of sending images to Amazon’s S3 storage service.

Other than those features and improvements it will include a variety of minor bug fixes and performance improvements that I have made along the way.

I look forward to hearing what you think of this upcoming release.