Mike and Andres on my team have been doing some really cool work with integrating the ASP.NET 2.0 Web Part functionality with Atlas.

One of the really cool scenarios that Web Parts enable is that they allow developers to build portal-like composition UI's really, really easily.  All you need to-do is create a few user-controls (.ascx files) with content or data, place them within the new <asp:webpartzone> container, and enable personalization on the page -- and then you have per-user drag/drop customization enabled (the entire scenario can be enabled in about 3 lines of code total).

One missing feature with the release of the Web Part controls in ASP.NET 2.0 is support for drag/drop within FireFox (note: there are other ways to move them in the zone -- what is missing though is the slick translucent drag/drop behavior).  This was a feature-cut we unfortunately had to-do late in the product cycle because of time (btw: it is the only "uplevel" feature of ASP.NET 2.0 client scripting that doesn't support FireFox -- the new menu, treeview, validation controls, script OM features, callbacks, etc all now support FireFox fully).

What Mike and Andres figured out was a way to enable FireFox drag/drop support within an upcoming Atlas release (they are also adding a number of cool other features that I'll save for another blog post <g>).  Here is a screen-shot of a simple unit test in action with FireFox: 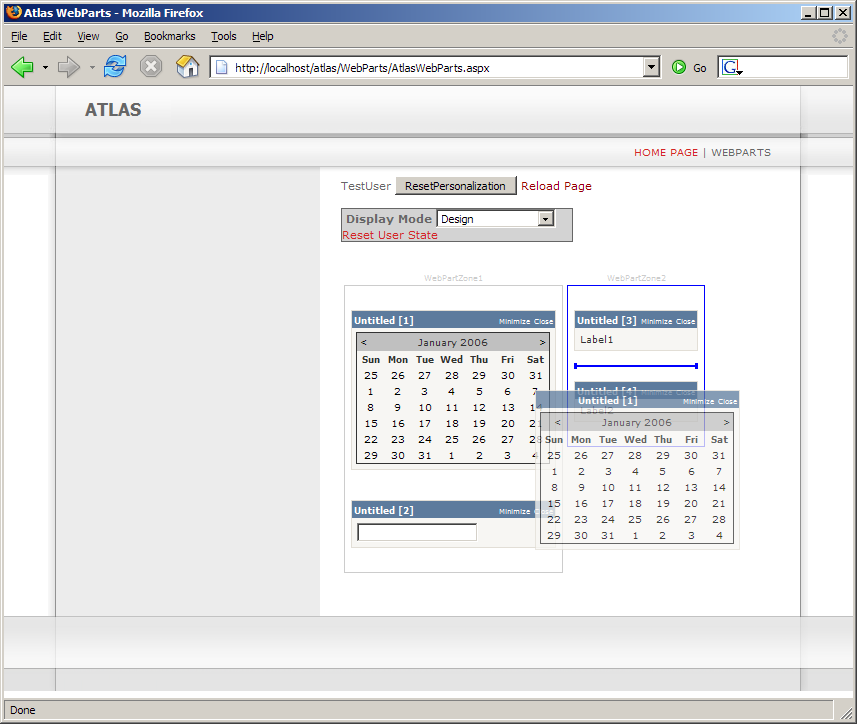