I'm really excited to announce that today we released V1.0 of the IronPython project for .NET.  Click here to download the binaries, source code, and tutorials for it for free from CodePlex.

IronPython is an implementation of the Python programming language for .NET.  It supports an interactive console with full dynamic compilation support and makes all .NET libraries easily available to Python programmers -- while still maintaining full compatibility with the Python language.

IronPython provides a great example of how languages can leverage some of the new dynamic language features that we added into the CLR with last year's .NET 2.0 release.  For example, CLR features like "lightweight code-generation" now make it possible for a dynamic language to quickly compile and JIT source in-memory, but also have the ability to garbage collect it out later (meaning you can quickly adapt types on the fly and not have to leak generated code).

IronPython is also a good example of how we are looking to blend the benefits of dynamic languages with a rich class framework and execution environment like .NET together.  Jim Hugunin (the lead architect for IronPython at Microsoft) recently did a great videocast with Jon Udell where he demonstrates a bunch of cool code scenarios that really show this off.  His demos included building a calculator application written in Python that uses WPF (aka Avalon) and integrates with the Speech APIs.  He also showed how you can optionally refactor performance critical code from Python into strongly typed languages like C# and seamlessly work across the two.  You can watch his full video-cast by clicking on the screen-capture below: 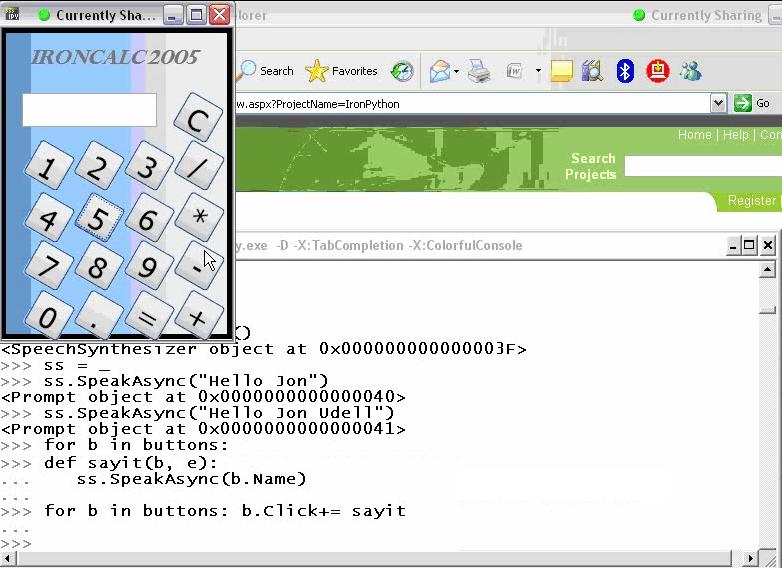 Going forward, you are going to see even more dynamic languages appear on .NET, and a bunch of cool new scenarios become enabled.