Earlier today the ASP.NET team shipped the final release candidate (RC2) for ASP.NET MVC 3.  You can download and install it here.

Today’s RC2 release is the near-final release of ASP.NET MVC 3, and is a true “release candidate” in that we are hoping to not make any more code changes with it.  We are publishing it today so that people can do final testing with it, let us know if they find any last minute “showstoppers”, and start updating their apps to use it.  We will officially ship the final ASP.NET MVC 3 “RTM” build in January.

This means that you do not need to install VS 2010 SP1 (or the SP1 beta) in order to use ASP.NET MVC 3.  It works just fine with the shipping Visual Studio 2010.  I’ll do a blog post next week, though, about some of the nice additional feature goodies that come with VS 2010 SP1 (including IIS Express and SQL CE support within VS) which make the dev experience for both ASP.NET Web Forms and ASP.NET MVC even better.

In addition to bug fixes and performance optimizations, today’s RC2 build contains a number of last-minute feature tweaks and “fit-n-finish” changes for the new ASP.NET MVC 3 features.  The feedback and suggestions we’ve received during the public previews has been invaluable in guiding these final tweaks, and we really appreciate people’s support in sending this feedback our way.

The default ASP.NET MVC 3 project templates have been updated to include jQuery 1.4.4 and jQuery Validation 1.7.

We are also excited to announce today that we are including jQuery UI within our default ASP.NET project templates going forward.  jQuery UI provides a powerful set of additional UI widgets and capabilities.  It will be added by default to your project’s \scripts folder when you create new ASP.NET MVC 3 projects.

The T4 templates used for scaffolding views with the Add-View dialog now generates views that use Html.EditorFor instead of helpers such as Html.TextBoxFor. This change enables you to optionally annotate models with metadata (using data annotation attributes) to better customize the output of your UI at runtime.

ASP.NET MVC 3 adds support for session-less controllers.  With the initial RC you used a [ControllerSessionState] attribute to specify this.  We shortened this in RC2 to just be [SessionState]:

Note that in addition to turning off session state, you can also set it to be read-only (which is useful for webfarm scenarios where you are reading but not updating session state on a particular request).

ASP.NET MVC includes built-in support to protect against HTML and Cross-Site Script Injection Attacks, and will throw an error by default if someone tries to post HTML content as input.  Developers need to explicitly indicate that this is allowed (and that they’ve hopefully built their app to securely support it) in order to enable it.

With ASP.NET MVC 3, we are also now supporting a new attribute that you can apply to properties of models/viewmodels to indicate that HTML input is enabled, which enables much more granular protection in a DRY way.  In last month’s RC release this attribute was named [SkipRequestValidation].  With RC2 we renamed it to [AllowHtml] to make it more intuitive:

Setting the above [AllowHtml] attribute on a model/viewmodel will cause ASP.NET MVC 3 to turn off HTML injection protection when model binding just that property.

With RC2 we are adding a Html.Raw() helper method that you can use to explicitly indicate that you do not want to HTML encode your output, and instead want to render the content “as-is”: 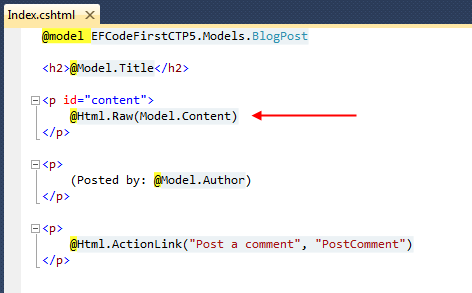 ASP.NET MVC has (since V1) supported a ViewData[] dictionary within Controllers and Views that enables developers to pass information from a Controller to a View in a late-bound way.  This approach can be used instead of, or in combination with, a strongly-typed model class.  The below code demonstrates a common use case – where a strongly typed Product model is passed to the view in addition to two late-bound variables via the ViewData[] dictionary:

With ASP.NET MVC 3 we are introducing a new API that takes advantage of the dynamic type support within .NET 4 to set/retrieve these values.  It allows you to use standard “dot” notation to specify any number of additional variables to be passed, and does not require that you create a strongly-typed class to do so.

With earlier previews of ASP.NET MVC 3 we exposed this API using a dynamic property called “ViewModel” on the Controller base class, and with a dynamic property called “View” within view templates.  A lot of people found the fact that there were two different names confusing, and several also said that using the name ViewModel was confusing in this context – since often you create strongly-typed ViewModel classes in ASP.NET MVC, and they do not use this API.

With RC2 we are exposing a dynamic property that has the same name – ViewBag – within both Controllers and Views.  It is a dynamic collection that allows you to pass additional bits of data from your controller to your view template to help generate a response.  Below is an example of how we could use it to pass a time-stamp message as well as a list of all categories to our view template:

Below is an example of how our view template (which is strongly-typed to expect a Product class as its model) can use the two extra bits of information we passed in our ViewBag to generate the response.  In particular, notice how we are using the list of categories passed in the dynamic ViewBag collection to generate a dropdownlist of friendly category names to help set the CategoryID property of our Product object.

The above Controller/View combination will then generate an HTML response like below. 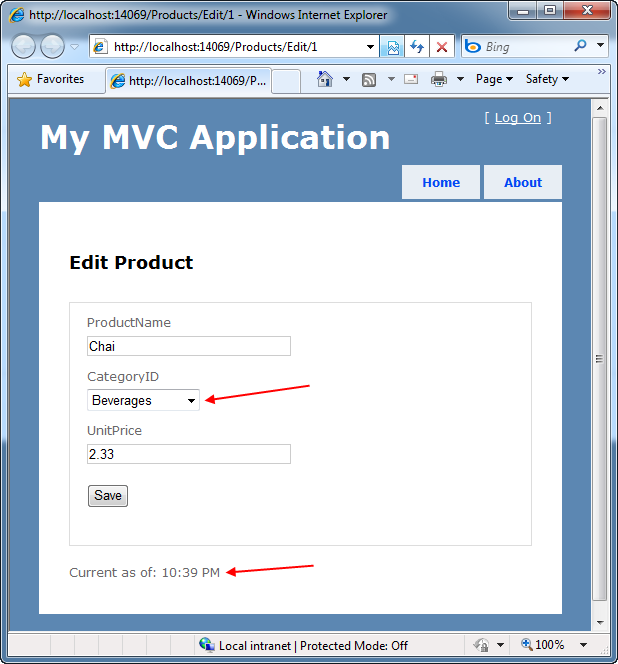 ASP.NET MVC 3’s output caching system no longer requires you to specify a VaryByParam property when declaring an [OutputCache] attribute on a Controller action method.  MVC3 now automatically varies the output cached entries when you have explicit parameters on your action method – allowing you to cleanly enable output caching on actions using code like below:

In addition to supporting full page output caching, ASP.NET MVC 3 also supports partial-page caching – which allows you to cache a region of output and re-use it across multiple requests or controllers.  The [OutputCache] behavior for partial-page caching was updated with RC2 so that sub-content cached entries are varied based on input parameters as opposed to the URL structure of the top-level request – which makes caching scenarios both easier and more powerful than the behavior in the previous RC.

@model declaration does not add whitespace

In earlier previews, the strongly-typed @model declaration at the top of a Razor view added a blank line to the rendered HTML output. This has been fixed so that the declaration does not introduce whitespace.

The behavior of the Html.ValidationMessage() helper was updated to show the first useful error message instead of simply displaying the first error.

During model binding, the ModelState dictionary can be populated from multiple sources with error messages about the property, including from the model itself (if it implements IValidatableObject), from validation attributes applied to the property, and from exceptions thrown while the property is being accessed.

When the Html.ValidationMessage() method displays a validation message, it now skips model-state entries that include an exception, because these are generally not intended for the end user. Instead, the method looks for the first validation message that is not associated with an exception and displays that message. If no such message is found, it defaults to a generic error message that is associated with the first exception.

ASP.NET MVC 3 includes built-in remote validation support with its validation infrastructure.  This means that the client-side validation script library used by ASP.NET MVC 3 can automatically call back to controllers you expose on the server to determine whether an input element is indeed valid as the user is editing the form (allowing you to provide real-time validation updates).

You can accomplish this by decorating a model/viewmodel property with a [Remote] attribute that specifies the controller/action that should be invoked to remotely validate it.  With the RC this attribute had a “Fields” property that could be used to specify additional input elements that should be sent from the client to the server to help with the validation logic.  To improve the clarity of what this property does we have renamed it to “AdditionalFields” with today’s RC2 release.

The ViewResult class now exposes both a “Model” and “ViewBag” property off of it.  This makes it easier to unit test Controllers that return views, and avoids you having to access the Model via the ViewResult.ViewData.Model property.

You can download and install the ASP.NET MVC 3 RC2 build here.  It can be installed on top of the previous ASP.NET MVC 3 RC release (it should just replace the bits as part of its setup).

The one component that will not be updated by the above setup (if you already have it installed) is the NuGet Package Manager.  If you already have NuGet installed, please go to the Visual Studio Extensions Manager (via the Tools –> Extensions menu option) and click on the “Updates” tab.  You should see NuGet listed there – please click the “Update” button next to it to have VS update the extension to today’s release.

If you do not have NuGet installed (and did not install the ASP.NET MVC RC build), then NuGet will be installed as part of your ASP.NET MVC 3 setup, and you do not need to take any additional steps to make it work.

We are really close to the final ASP.NET MVC 3 release, and will deliver the final “RTM” build of it next month.  It has been only a little over 7 months since ASP.NET MVC 2 shipped, and I’m pretty amazed by the huge number of new features, improvements, and refinements that the team has been able to add with this release (Razor, Unobtrusive JavaScript, NuGet, Dependency Injection, Output Caching, and a lot, lot more).  I’ll be doing a number of blog posts over the next few weeks talking about many of them in more depth.