This week we are holding our Connect() developer event in New York City.  This is an event that is being streamed online for free, and it covers some of the great new capabilities coming with the Visual Studio 2015 and .NET 5 releases.  You can watch the event live as well as on-demand here.

I just finished giving the opening keynote of the event during which I made several big announcements:

Announcing the Open Sourcing of the .NET Core Runtime and Libraries

Over the last several years we have integrated more and more open source technology into our .NET, Visual Studio, and Azure offerings.  We have also begun to open source more of our own code and technology as well.

Earlier this year, at the Build 2014 conference, I announced the creation of the .NET Foundation – which is an independent organization designed to foster the development and collaboration of open source technologies for .NET.  We have now open sourced ASP.NET, EF, Web API, NuGet and the "Roslyn" C# and VB compilers under it.

It has been great to see the energy and innovation in these technologies since we made the open source announcements. We continue to have dedicated Microsoft teams working on each of them (several of the teams have more developers than ever before).  The open source process is now enabling the teams to collaborate even more with other developers in the community, and every single one of the above projects have now accepted code contributions from developers outside Microsoft.  The combination is enabling an even richer flow of ideas, and even better products.

Today I’m excited to announce that we are going even further, and will be open sourcing the .NET Core Runtime.  This will include everything needed to execute .NET code – including the CLR, Just-In-Time Compiler (JIT), Garbage Collector (GC), and core .NET base class libraries.

We are releasing the source under the MIT open source license and are also issuing an explicit patent promise to clarify users patent rights to .NET.  This morning, we published the public repository on GitHub where the project will be hosted: https://github.com/dotnet/corefx

Today’s source release includes many of the newer core .NET framework libraries (ImmutableCollections, SIMD, XML and MetadataReader).  These libraries are fully open, and are ready to accept contributions.  Over the next several weeks and months we will continue to transfer source (including the Core CLR which is not there right now but in the process of being moved) into the repository and likewise make it open for contributions.

What does this open sourcing mean?

Today’s open source announcement means that developers will have a fully supported, fully open source, fully cross platform .NET stack for creating server and cloud applications – including everything from the C#/VB compilers, to the CLR runtime, to the core .NET base class libraries, to the higher-level .NET Web, Data and API frameworks.

It is an exciting day for .NET, and the new open source process will allow the .NET teams in Microsoft to collaborate even more deeply with other developers around the world.  The result is going to be even better products for everyone.

Last month at a Cloud Event we held in San Francisco, Satya Nadella – our CEO – showed a slide like this one where he talked about how Microsoft loves Linux: 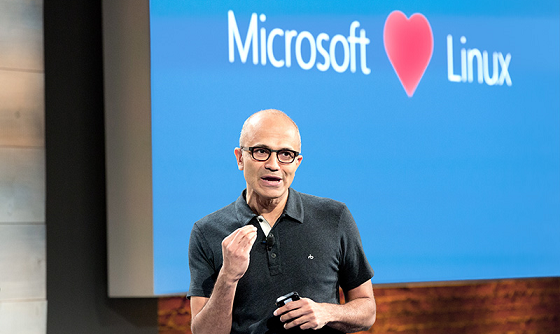 We’ve worked hard with Azure to make it a first-class cloud platform for Linux based applications, and shared how more than 20% of all VMs running on Azure are Linux based.  In fact, we now have 5 different Linux distributions officially supported for use on Azure – with full integration within our management portal and command-line extensibility.

This will enable you to build .NET server and cloud applications and run them on both Windows Server and Linux.  It is going to enable every developer – regardless of what operating system they use to develop or target – to use .NET. And to do so on a fully open source runtime.

We will be working closely with the Mono community as we complete our Linux port.  The Mono community have done a great job advancing .NET and Linux over the last decade.  Releasing the .NET Core source under an open source license is going to enable us to collaborate together much more closely going forward.  There are many Linux enhancements Mono has built that we would like to use, and likewise there are improvements Mono will be able to benefit from by being able to use the .NET source code.  Today’s set of announcements are a big win for everyone.

I’m also excited to announce that we are launching a new free edition of Visual Studio today that will empower even more developers to build great apps and solutions.

The new Visual Studio Community 2013 edition is a full-featured IDE.  It supports multiple project types in one solution file in a single IDE, and has all of the productivity features and IDE extensibility capabilities (meaning you can use Xamarin, ReSharper, VsVim, and any other VSIX extension) that developers love in Visual Studio.

It is now available completely free for:

We are making it available for download starting today, and developers can download and start using it immediately.  There is no program you need to join to use it – simply visit www.visualstudio.com, click the download button, and you are good to go.

It is going to enable even more developers to take advantage of Visual Studio and build even better applications.  We are looking forward to seeing what you build with it.

It has never been a better time to be a software developer.  Software is what enables organizations to succeed in today’s digital environment.  It is what enables businesses to connect better with customers, to deliver amazing new experiences, to drive new revenue streams, and to run operations more efficiently.

Using the cloud, every software developer on the planet can now create and build solutions that can reach millions of users, with no upfront costs, powered by a cloud infrastructure that delivers completely global reach.  The impact an individual developer can now have has never been greater than it is today.

Our goal at Microsoft is to provide developers with the platform and tools that will make them incredibly successful.  It is a mission we have had since the very beginning of the company.  Today’s .NET open source, cross platform, and Visual Studio Community edition announcements will enable the development technology we build to be leveraged by an even wider range of developers.  We are really excited to see some of the new apps and solutions that are built with it.

In addition to the above announcements, we are also announcing and demoing tons of new features and services for the first time at our Connect() event streamed from New York.  You can watch the online presentations here.  Also read Soma’s blog post for a summary of some of the new VS 2015 and .NET 5 capabilities we announced this week.