Earlier today the ASP.NET team launched a new Microsoft Ajax CDN (Content Delivery Network) service that provides caching support for AJAX libraries (including jQuery and ASP.NET AJAX).  The service is available for free, does not require any registration, and can be used for both commercial and non-commercial purposes.

What does a CDN provide?

Content delivery networks (CDNs) are composed of "edge cache" servers that are strategically placed around the world at key Internet network points.  These "edge cache" servers can be used to cache and deliver all types of content – including images, videos, CSS and JavaScript files.

Using a CDN can significantly improve a website's end-user performance, since it enables browsers to more quickly retrieve and download content.  For example, instead of having a browser request for an image traverse all the way across the Internet to your web server to download, a CDN can instead serve the request directly from a nearby "edge cache" server that might only be a single network hop away from your customer (making it return much faster – which makes your pages load quicker).

What does the Microsoft AJAX CDN provide?

The Microsoft AJAX CDN makes it really easy to add the jQuery and ASP.NET AJAX script libraries to your web sites, and have them be automatically served from one of our thousands of geo-located edge-cache servers around the world.

For example, if you want to use jQuery from the Microsoft AJAX CDN then you can simply add a standard script tag to your page using the URL below:

When the browser requests the script file it will be automatically served by the CDN "edge cache" server that is closest to the end-user.  This means:

You can get a full listing of the JavaScript libraries (and associated URLs) we already have loaded in our CDN cache here: www.asp.net/ajax/cdn

We'll update the available libraries in the CDN as we ship new versions of ASP.NET AJAX, and continue to update it to include all of the JavaScript files we ship with ASP.NET and Visual Studio (including jQuery, the jQuery Validation plugin, and additional libraries we ship in the future).

The CDN service is free and available for anyone in the community to use for both commercial and non-commercial purposes.  You do not need to register to take advantage of it.

Using the Microsoft AJAX CDN with the ASP.NET 4.0 ScriptManager

In addition to allowing you to reference script files directly using a <script> element, ASP.NET 4.0 will make it easy to use the CDN from ASP.NET Web Forms applications that use the <asp:scriptmanager/> server control.

The ASP.NET 4.0 <asp:ScriptManager> control includes a new property named EnableCdn. When you assign the value true to this property, your application will use the Microsoft CDN to request JavaScript files automatically:

This provides a nice end-user performance improvement, and means that users accessing your ASP.NET website won’t need to re-download these files if they have visited another ASP.NET website that uses the CDN.

You can also now use the ASP.NET AJAX libraries simply by adding the following script tags that point at the CDN:

These script tags reference the beta version of the September 2009 release of the ASP.NET AJAX library (the /0909/ part of the URL represents the year and month that the version of ASP.NET AJAX was released).

After you add script tags that reference the ASP.NET AJAX library, you can start using the library in your page. For example, the following code attaches a client DataView control that represents an array of photos to a DIV element in the body of the page.

The DIV element – with an id of "photos" – contains a template for formatting each photo in the array of photos. Here’s how the photos element is declared:

When the DataView is rendered, the contents of the photos DIV element is rendered for each photo in the array of photos. The following photos are displayed: 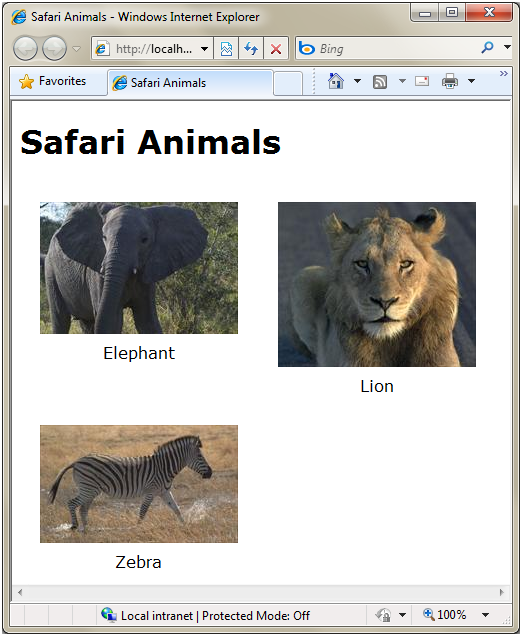 Because ASP.NET AJAX is a pure JavaScript library, the code above works perfectly well in an ASP.NET Web Forms, ASP.NET MVC, HTML, or even with classic Active Server Pages. The code also works with all modern browsers.

You can learn more about ASP.NET AJAX Preview 5 by downloading the sample code from the CodePlex project: http://aspnet.codeplex.com/Release/ProjectReleases.aspx?ReleaseId=32770

Below are several blog posts that delve into the features of ASP.NET AJAX Preview 5 in more depth:

The Microsoft Ajax CDN enables you to significantly improve the performance of ASP.NET Web Forms and ASP.NET MVC applications that use ASP.NET AJAX or jQuery.  The service is available for free, does not require any registration, and can be used for both commercial and non-commercial purposes.

ASP.NET 4.0 will make it especially easy for ASP.NET Web Forms developers to take advantage of the CDN. By setting one property of the ScriptManager control, you will be able to redirect all requests for the built-in ASP.NET JavaScript files to the CDN and improve the performance of your Web Forms applications.