All of these SDK enhancements are now available to start using immediately and you can download the SDK from the Windows Azure .NET Developer Center.  Visual Studio’s Team Foundation Service (http://tfs.visualstudio.com/) has also been updated to support today’s SDK 2.1 release, and the SDK 2.1 features can now be used with it (including with automated builds + tests).

Below are more details on the new features and capabilities released today: 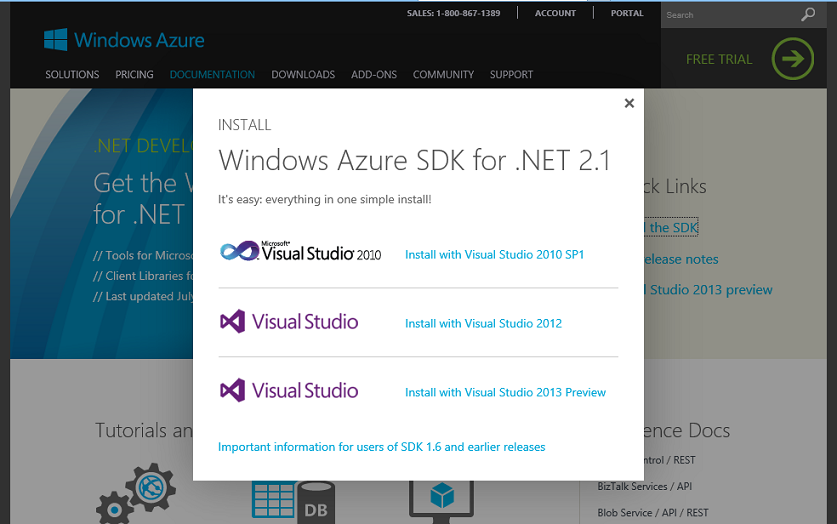 One of the requests we’ve heard from several customers has been to have the ability to host Visual Studio within the cloud (avoiding the need to install anything locally on your computer).

With today’s SDK update we’ve added a new VM image to the Windows Azure VM Gallery that has Visual Studio Ultimate 2013 Preview, SharePoint 2013, SQL Server 2012 Express and the Windows Azure 2.1 SDK already installed on it.  This provides a really easy way to create a development environment in the cloud with the latest tools. With the recent shutdown and suspend billing feature we shipped on Windows Azure last month, you can spin up the image only when you want to do active development, and then shut down the virtual machine and not have to worry about usage charges while the virtual machine is not in use.

You can create your own VS image in the cloud by using the New->Compute->Virtual Machine->From Gallery menu within the Windows Azure Management Portal, and then by selecting the “Visual Studio Ultimate 2013 Preview” template: 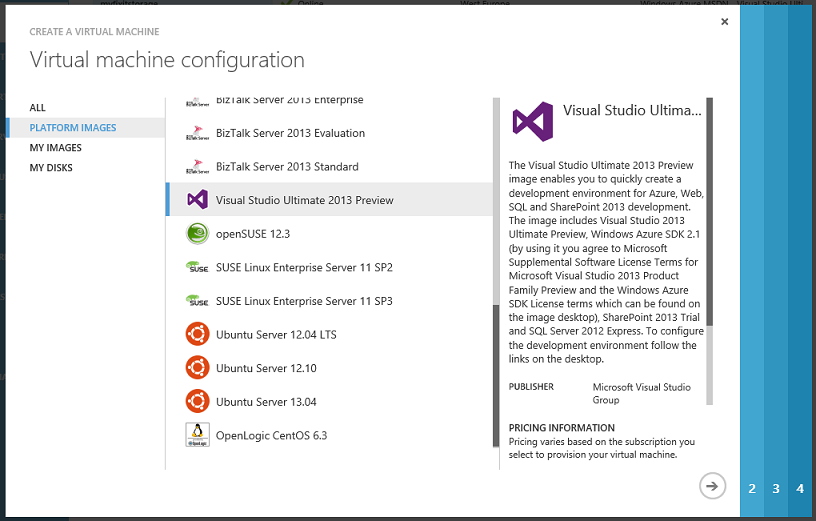 Once your subscription information is added, Windows Azure services from all your subscriptions are automatically enumerated in the Server Explorer. You no longer need to manually add services to Server Explorer individually. This provides a convenient way of viewing all of your cloud services, storage accounts, service bus namespaces, virtual machines, and web sites from one location:

To enable this, just select “Filter Services” from the context menu on the Windows Azure node: 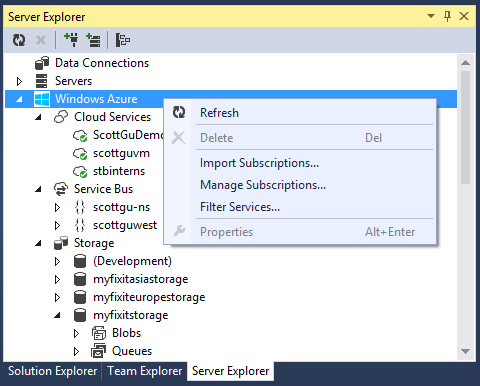 Then choose the subscriptions and/or regions you want to filter by. In the below example, I’ve decided to show services from my pay-as-you-go subscription within the East US region: 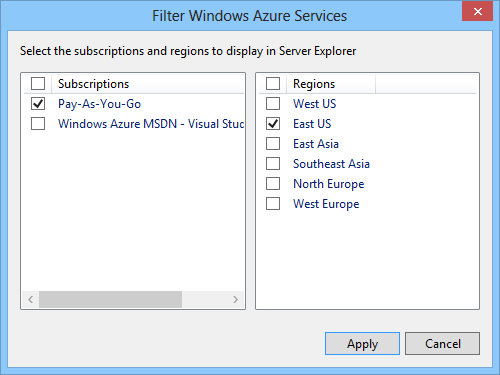 Visual Studio will then automatically filter the items that show up in the Server Explorer appropriately: 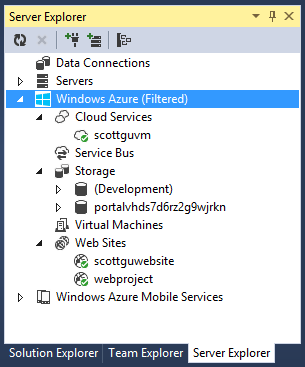 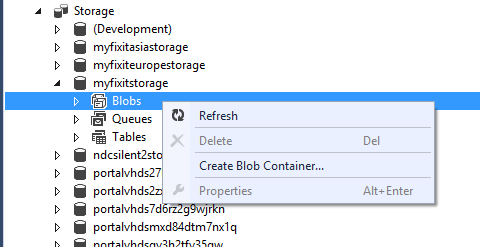 Virtual Machines now have context menu actions that allow you start, shutdown, restart and delete a Virtual Machine directly within the Visual Studio Server Explorer. The shutdown action enables you to shut down the virtual machine and suspend billing when the VM is not is use, and easily restart it when you need it: 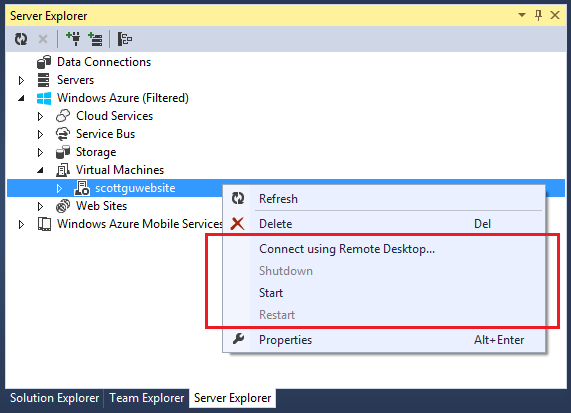 This is especially useful in Dev/Test scenarios where you can start a VM – such as a SQL Server – during your development session and then shut it down / suspend billing when you are not developing (and no longer be billed for it).

You can now launch Visual Studio and run your cloud services locally as a Normal User (without having to elevate to an administrator account) using a new Emulator Express option included as a preview feature with this SDK release.  Emulator Express is a version of the Windows Azure Compute Emulator that runs a restricted mode – one instance per role – and it doesn’t require administrative permissions and uses 40% less resources than the full Windows Azure Emulator. Emulator Express supports both web and worker roles.

To run your application locally using the Emulator Express option, simply change the following settings in the Windows Azure project. 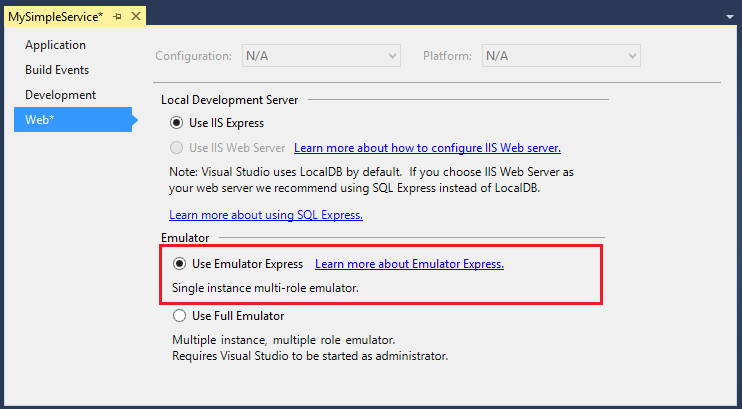 You are now able to create, update and delete Notification Hubs programmatically, manage your device registrations, and send push notifications to all your mobile clients across all platforms (Windows Store, Windows Phone 8, iOS, and Android).

One of the new features included with today’s Windows Azure SDK 2.1 release is support for Service Bus “Paired Namespaces”.  Paired Namespaces enable you to better handle situations where a Service Bus service namespace becomes unavailable (for example: due to connectivity issues or an outage) and you are unable to send or receive messages to the namespace hosting the queue, topic, or subscription. Previously,to handle this scenario you had to manually setup separate namespaces that can act as a backup, then implement manual failover and retry logic which was sometimes tricky to get right.

Additionally, there has been a change to the code generated by the Windows Azure Worker Role with Service Bus Queue project template. This code now uses an event-driven “message pump” programming model using the QueueClient.OnMessage method.

Since my last blog post on the previous Windows Azure SDK 2.0 release, we’ve updated Windows Azure PowerShell (which is a separate download) five times. You can find the full change log here. We’ve added new cmdlets in the following areas:

We now support the following cmdlets for the China instance and Windows Azure Pack, respectively:

We will have full cmdlet support for these two Windows Azure environments in PowerShell in the near future.

Similar to the Start/Stop VM capability in VS Server Explorer, you can now stop your VM and suspend billing:

If you want to keep the original behavior of keeping your stopped VM provisioned, you can pass in the -StayProvisioned switch parameter.

We’ve added and updated a bunch of cmdlets for you to configure fine-grained network ACL on your VM endpoints. You can use the following cmdlets to create ACL config and apply them to a VM endpoint:

The following example shows how to add an ACL rule to an existing endpoint of a VM.

The following example shows how to enable Remote Desktop for a Cloud Service.

With our last SDK update, we introduced the Get-AzureWebsiteLog –Tail cmdlet to get the log streaming of your Web Sites. Recently, we’ve also added cmdlets to configure Web Site application diagnostics:

The following 2 examples show how to enable application diagnostics to the file system and a Windows Azure Storage Table:

We’ve also added a -AllowAllAzureServices parameter to New-AzureSqlDatabaseServerFirewallRule so that you can easily add a firewall rule to whitelist all Windows Azure IP addresses.

Other new cmdlets include

Today’s release includes a bunch of great features that enable you to build even better cloud solutions.  All the above features/enhancements are shipped and available to use immediately as part of the 2.1 release of the Windows Azure SDK for .NET.

If you don’t already have a Windows Azure account, you can sign-up for a free trial and start using all of the above features today.  Then visit the Windows Azure Developer Center to learn more about how to build apps with it.