IIS 7.0 is one of the products that my team is shipping later this year that I'm most excited about.  It is the most significant release of our web-server that we've done since IIS 1.0, and introduces a huge number of improvements for both administrators and developers.

Mike Volodarsky from the IIS team wrote a great article for the March 2007 MSDN Magazine that summarizes some of the key IIS 7.0 improvements.  I highly recommend reading his excellent article here for a quick summary of some of them.

IIS 7.0 is included within the Windows Vista client release, and is now available with the home editions of the operating system (unlike IIS 5.1 which was only available with XP Professional).  IIS 7.0 for server will ship later this year with Windows Longhorn Server, and will add a bunch of additional deployment features - including much richer hosting support, secure FTP support, and built-in web farm deployment support.

The web farm support in particular is really cool, and will allow you to deploy your web applications on a file-share that contains all of the code, configuration, content, and encryption keys needed to run a server.  You can then add any number of stateless and configuration-less web-servers into a web farm and just point them at the file-server to dynamically load their configuration settings (including bindings, virtual directories, app pool settings, etc) and application content.  This makes it trivial to scale out applications across machines, and avoid having to use replication schemes for configuration and application deployment (just copy over the files on the file-share and all of the machines in the web farm will immediately pick up the changes).

The upcoming Beta3 release of Windows Longhorn Server will support a go-live license, so you'll be able to take advantage of this soon.  We are already running www.Microsoft.com on IIS 7.0 clusters (so you'll be in good company!).

In previous versions of IIS, developers had to write ISAPI extensions/filters to extend the server.  In addition to being a royal pain to write, ISAPIs were also limited in how they plugged into the server and in what they allowed developers to customize.  For example, you can't implement URL Rewriting code within an ISAPI Extension (note: ASP.NET is implemented as an ISAPI extension).  And you end up tying up the I/O threads of the web-server if you write long-running code as an ISAPI Filter (which is why we didn't enable managed code to run in the filter execution phase of a request).

One of the major architectural changes we made to the core IIS processing engine with IIS7 was to enable much, much richer extensibility via a new modular request pipeline architecture.  You can now write code anywhere within the lifetime of any HTTP request by registering an HTTP Extensibility Module with the web-server.  These extensibility modules can be written using either native C++ code or .NET managed code (you can use the existing ASP.NET System.Web.IHttpModule interface to implement this).

All "built-in" IIS7 functionality (authentication, authorization, static file serving, directory listing support, classic ASP, logging, etc) is now implemented using this public modular pipeline API.  This means you can optionally remove any of these IIS7 "built-in" features and replace/extend them with your own implementation.

ASP.NET on IIS 7.0 has itself been changed from being implemented as an ISAPI to instead plug in directly as modules within the IIS7 pipeline:

Among the many benefits this brings:

1) You can now use ASP.NET Forms Authentication, Membership/Roles, and any other feature for all requests to the server (for example: .htm, .php, and .jsp files)

3) You can replace or extend any existing IIS feature using VB or C# (for example: you could remove the built-in directory listing module and plug-in your own).

This really brings a tremendous number of extensibility opportunities to .NET developers.

To help enable developers share the extensibility modules and other add-ins they write, the IIS team recently launched the "Download Center" on www.iis.net.  This enables developers to browse/download as well as upload and share module extensions for IIS.  You can check it out here. 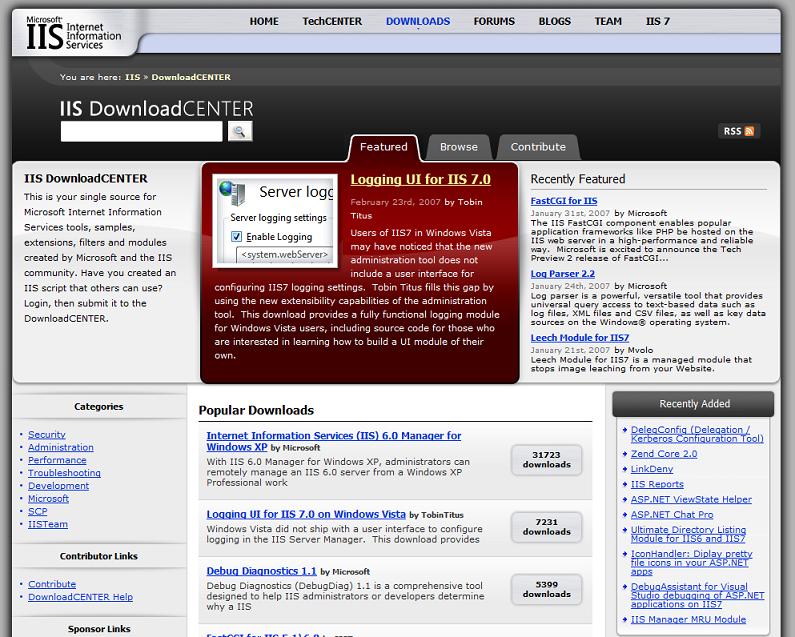 Note that in addition to having a managed extensibility story for Http Modules, IIS7 also now allows you to write managed admin tool UI extensions (the admin tool itself was built using Windows Forms), as well as use the .NET System.Configuration namespace to manage the IIS7 configuration system.

In addition to the cool new extensibility options that IIS 7.0 provides, there are a ton of improvements (both big and small) that ASP.NET developers will really appreciate.  I'll be blogging a series of them over the next few weeks/months and point out some really cool things that you'll be able to take advantage of.