Yesterday I blogged about VS 2005 Service Pack 1 (SP1) being released.

If you have previously installed the VS 2005 SP1 Beta, then you need to uninstall it before installing the final SP1 release.  With Windows XP you can do this by going to your Add/Remove Programs list in the control panel, where both Visual Studio and the SP1 Beta Patch will show up in the list.

Several people over the last day have asked me about how this works on Windows Vista - since a quick glance at your Add/Remove programs won't show up the SP1 Beta Patch.  The reason for this is because Vista separates "updates"/"patches" separately from installed programs.  You need to click the "View installed updates" link on the top left of the programs and features control panel to see these: 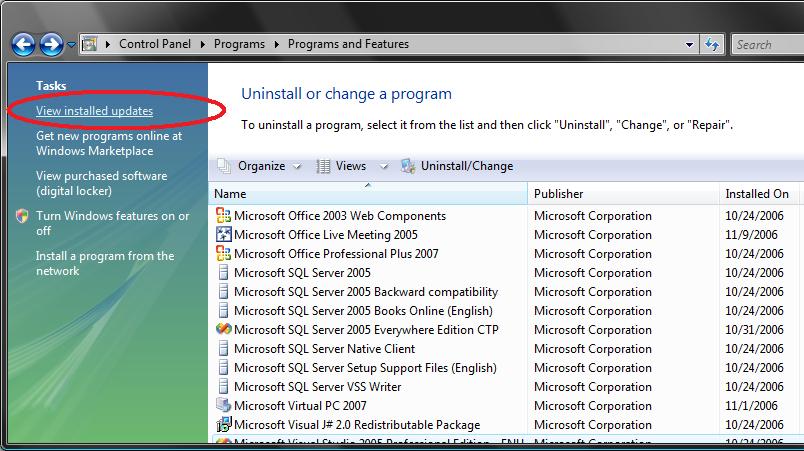 Once clicked it will list all patches/updates on your system:

You can then select the SP1 Beta patch and uninstall it.

In addition to the VS 2005 SP1 download, yesterday we released a beta for a download that fixes Vista specific issues with VS 2005 (we are waiting a few more weeks to get user feedback on using VS 2005 on Vista to find any remaining issues before we declare this second Vista update done - but you'll be able to install this VS 2005 for Vista beta patch now to get immediate fixes).

Jan 1st 2006 Update: You can download the additional Vista SP1 Beta Patch here.  Mike has a detailed post on debugging ASP.NET using VS 2005 on Vista with IIS7 that you should read as well.