Both of the above options have their pros and cons, and many ASP.NET developers have told us: “I wish I could have the ease of use of the ASP.NET Development Server, but still have all the power and features of IIS”.  Today I’m happy to announce a new, free option that we are enabling – IIS Express - that combines the best characteristics of both, and which will make it easier to build and run ASP.NET sites and applications.

IIS Express will work with VS 2010 and Visual Web Developer 2010 Express, will run on Windows XP and higher systems, does not require an administrator account, and does not require any code changes to use.  You will be able to take advantage of it with all types of ASP.NET applications, and it enables you to develop using a full IIS 7.x feature-set.

Before I get into the details of IIS Express, let’s first quickly review how the ASP.NET Development Server and IIS options work today.

Visual Studio’s built-in ASP.NET Development Server (also known as “Cassini”) has the benefit of being light-weight and easy to quickly run.  It doesn’t listen on remote ports (which makes it easier to get approved for many corporate security environments), works even when you are running under a non-administrator account, and doesn’t require a separate installation step.

The fact that it is so easy to get running is a huge positive of it – and the reason it is the default web-server used by ASP.NET projects in Visual Studio when you press F5 to run them:

The downside with the ASP.NET Developer Server, though, is that it does not support a full set of web-server features.  For example, it doesn’t support SSL, URL Rewriting Rules (like the SEO URL Rewrite Rules I blogged about here), Custom Security Settings, and other richer features now offered with IIS 7.

Using IIS as your development server allows you to take full advantage of all web-server features (SSL, URL Rewrite Rules, etc).  IIS is a full-fledged web-server – which means you’ll get an experience closer to what it will work like when you deploy the application on a production server.

The downside with using the IIS option today, though, is that some companies don’t allow full web-servers to be installed on developer machines. IIS also requires administrator account access to setup and debug projects.  Different versions of Windows also support different versions of IIS.  For example, if you are running on Windows XP you have to use the IIS 5.1 web-server that comes with it – which doesn’t support all the new features of IIS 7.x.  Configuring a web project within VS to use IIS also requires some extra installation and configuration steps.

IIS Express – The Best of Both Options

We have been working on a new flavor of IIS 7.x that is optimized for developer scenarios that we are calling “IIS Express”. We think it combines the ease of use of the ASP.NET Web Server with the full power of IIS.  Specifically:

IIS Express (like the ASP.NET Development Server) can be quickly launched to run a site from a directory on disk.  It does not require any registration/configuration steps. This makes it really easy to launch and run for development scenarios.

We are enabling IIS Express so that it can be easily used with Visual Studio 2010. You’ll be able to configure VS 2010 to use it instead of the ASP.NET Web Server as the default web-server on ASP.NET Projects.  Like the ASP.NET Development Server today, you won’t need to register a site or virtual directory to use IIS Express. It will support the same usage-model as the ASP.NET Development Server today – just with more feature support.

When you press F5 to run an ASP.NET project, Visual Studio can automatically launch IIS Express and use it to run/debug the application (no extra configuration required).  Like the ASP.NET Web Server, IIS Express will show up in your task-bar tray when running:

You can right-click and click “exit” on the icon above to quickly shutdown IIS Express.  You can also right-click and pull up a list of all sites running with it, as well as the directory location and .NET versions they are running under: 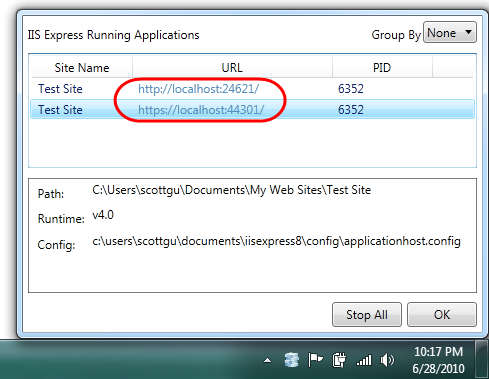 Two cool things to notice above:

1) The “Test Site” we are running, as well as IIS Express itself, live under the c:\users\[username] folder on disk. This enables non-administrator usage of IIS Express and sites – and enables a bunch of scenarios not possible with the full IIS today (including the ability to run IIS Express in both a locked-down enterprise environment as well as a locked-down school shared computer environment).

2) The “Test Site” we are running above using IIS Express supports both HTTP and HTTPS access.  IIS Express automatically installs a “self-signed certificate” and enables URL ACLs and SSL Certificates for ports so that developers (running as non-administrators on a machine) can use SSL without needing to elevate their accounts or setup any additional configuration.  This enables you to configure secure pages within your applications (like Logon forms) for SSL and run/test them at development time just like they’ll work on your real web-server.

IIS Express is as easy to run and use as the ASP.NET Web Server you are familiar with today.  But because IIS Express is based on the IIS 7x codebase, you have a full web-server feature-set that you can use.  This means you can build and run your applications just they’ll work on a real production web-server.  In addition to scenarios like SSL, you can take advantage of the IIS 7.x URL Rewriter module, Media Extensions, Dynamic Compression, Advanced Logging, Custom Security and other rich modules now available.

In addition to supporting ASP.NET, IIS Express also supports Classic ASP and other file-types and extensions supported by IIS – which also makes it ideal for sites that combine a variety of different technologies.

We think IIS Express makes it even easier to build, run and test web applications.  It works with all versions of ASP.NET and supports all ASP.NET application types (including obviously ASP.NET Web Forms and ASP.NET MVC applications).  Best of all – you do not need to change any code to take advantage of it.  You’ll be able to optionally use it with all your current projects today.

We’ll be releasing the first public beta of IIS Express shortly. With the beta you’ll be able to right-click on a file-system folder and have IIS Express launch a web-site based on that file-system location. We’ll also be releasing a patch for VS 2010 and Visual Web Developer 2010 Express later this year that will enable you to automatically launch and use IIS Express in place of VS’s built-in ASP.NET Developer Server.  Future versions of Visual Studio will then ship with this functionality built-in.