The jQuery library has a passionate community of developers, and it is now the most widely used JavaScript library on the web today.

Two years ago I announced that Microsoft would begin offering product support for jQuery, and that we’d be including it in new versions of Visual Studio going forward. By default, when you create new ASP.NET Web Forms and ASP.NET MVC projects with VS 2010 you’ll find jQuery automatically added to your project.

A few weeks ago during my second keynote at the MIX 2010 conference I announced that Microsoft would also begin contributing to the jQuery project.  During the talk, John Resig -- the creator of the jQuery library and leader of the jQuery developer team – talked a little about our participation and discussed an early prototype of a new client templating API for jQuery.

In this blog post, I’m going to talk a little about how my team is starting to contribute to the jQuery project, and discuss some of the specific features that we are working on such as client-side templating and data linking (data-binding).

jQuery has a fantastic developer community, and a very open way to propose suggestions and make contributions.  Microsoft is following the same process to contribute to jQuery as any other member of the community.

As an example, when working with the jQuery community to improve support for templating to jQuery my team followed the following steps:

The jQuery team is the ultimate determiner on what happens with the templating proposal – they might include it in jQuery core, or make it an official plugin, or reject it entirely.  My team is excited to be able to participate in the open source process, and make suggestions and contributions the same way as any other member of the community.

Client-side templates enable jQuery developers to easily generate and render HTML UI on the client.  Templates support a simple syntax that enables either developers or designers to declaratively specify the HTML they want to generate.  Developers can then programmatically invoke the templates on the client, and pass JavaScript objects to them to make the content rendered completely data driven.  These JavaScript objects can optionally be based on data retrieved from a server.

Because the jQuery templating proposal is still evolving in response to community feedback, the final version might look very different than the version below. This blog post gives you a sense of how you can try out and use templating as it exists today (you can download the prototype by the jQuery core team at http://github.com/jquery/jquery-tmpl or the latest submission from my team at http://github.com/nje/jquery-tmpl). 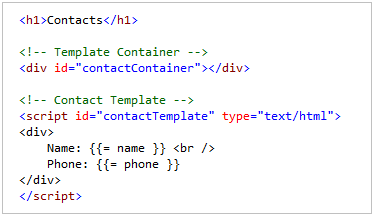 The {{= name }} and {{= phone }} expressions are used within the contact template above to display the names and phone numbers of “contact” objects passed to the template.

We can use the template to display either an array of JavaScript objects or a single object. The JavaScript code below demonstrates how you can render a JavaScript array of “contact” object using the above template. The render() method renders the data into a string and appends the string to the “contactContainer” DIV element:

When the page is loaded, the list of contacts is rendered by the template.  All of this template rendering is happening on the client-side within the browser: 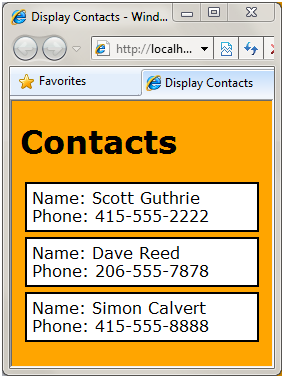 Even this small set of template commands is very useful though. Imagine, for example, that each contact can have zero or more phone numbers. The contacts could be represented by the JavaScript array below:

The template below demonstrates how you can use the if and each template commands to conditionally display and loop the phone numbers for each contact: 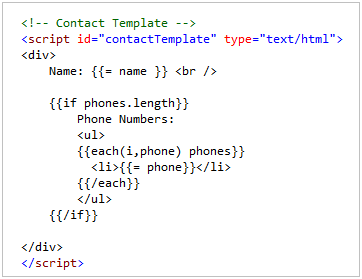 The ASP.NET team recently submitted another proposal and prototype to the jQuery forums (http://forum.jquery.com/topic/proposal-for-adding-data-linking-to-jquery). This proposal describes a new feature named data linking. Data Linking enables you to link a property of one object to a property of another object - so that when one property changes the other property changes.  Data linking enables you to easily keep your UI and data objects synchronized within a page.

Imagine, for example, that you have a page with the following HTML <input> elements:

The following JavaScript code links the two INPUT elements above to the properties of a JavaScript “contact” object that has a “name” and “phone” property:

Because the contact object is linked to the INPUT element, when you request the page, the values of the contact properties are displayed: 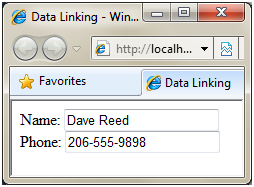 More interesting, the values of the linked INPUT elements will change automatically whenever you update the properties of the contact object they are linked to.

For example, we could programmatically modify the properties of the “contact” object using the jQuery attr() method like below:

Because our two INPUT elements are linked to the “contact” object, the INPUT element values will be updated automatically (without us having to write any code to modify the UI elements):

Note that we updated the contact object above using the jQuery attr() method. In order for data linking to work, you must use jQuery methods to modify the property values.

For example, the following code adds a client-side JavaScript click handler to an HTML button element. When you click the button, the property values of the contact object are displayed using an alert() dialog:

The following demonstrates what happens when you change the value of the Name INPUT element and click the Save button. Notice that the name property of the “contact” object that the INPUT element was linked to was updated automatically: 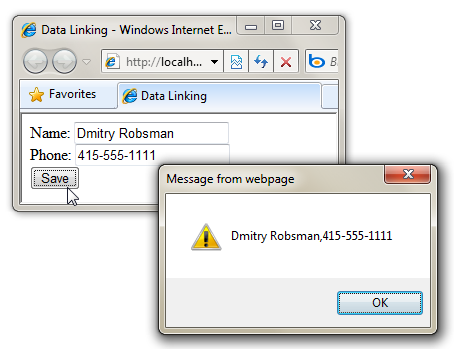 The above example is obviously trivially simple.  Instead of displaying the new values of the contact object with a JavaScript alert, you can imagine instead calling a web-service to save the object to a database. The benefit of data linking is that it enables you to focus on your data and frees you from the mechanics of keeping your UI and data in sync.

The current data linking proposal also supports a feature called converters. A converter enables you to easily convert the value of a property during data linking.

For example, imagine that you want to represent phone numbers in a standard way with the “contact” object phone property. In particular, you don’t want to include special characters such as ()- in the phone number - instead you only want digits and nothing else. In that case, you can wire-up a converter to convert the value of an INPUT element into this format using the code below:

You can also use a converter in the opposite direction also. For example, you can apply a standard phone format string when displaying a phone number from a phone property.

Currently, we are working on an extension of the data linking proposal to support declarative data linking. We want to make it easy to take advantage of data linking when using a template to display data.

For example, imagine that you are using the following template to display an array of product objects:

Notice the {{link name}} and {{link price}} expressions. These expressions enable declarative data linking between the SPAN elements and properties of the product objects. The current jQuery templating prototype supports extending its syntax with custom template commands. In this case, we are extending the default templating syntax with a custom template command named “link”.

Whenever you change the value of the INPUT elements in a template that uses declarative data linking, the underlying JavaScript data object is automatically updated. Instead of needing to write code to scrape the HTML form to get updated values, you can instead work with the underlying data directly – making your client-side code much cleaner and simpler.

Downloading Working Code Examples of the Above Scenarios

You can download this .zip file to get with working code examples of the above scenarios.  The .zip file includes 4 static HTML page:

You can un-zip the file to the file-system and then run each page to see the concepts in action.

We are excited to be able to begin participating within the open-source jQuery project.  We’ve received lots of encouraging feedback in response to our first two proposals, and we will continue to actively contribute going forward.  These features will hopefully make it easier for all developers (including ASP.NET developers) to build great Ajax applications.