Patrick recently posted about something he found odd when installing the VS 2010 RC – which was that code IntelliSense for C# wasn’t working.  When he pulled up Tools->Options and checked under the Text Editor->C# settings he noticed that the reason IntelliSense wasn’t working was because his profile had them turned off – and he couldn’t understand why it was configured to be off by default: 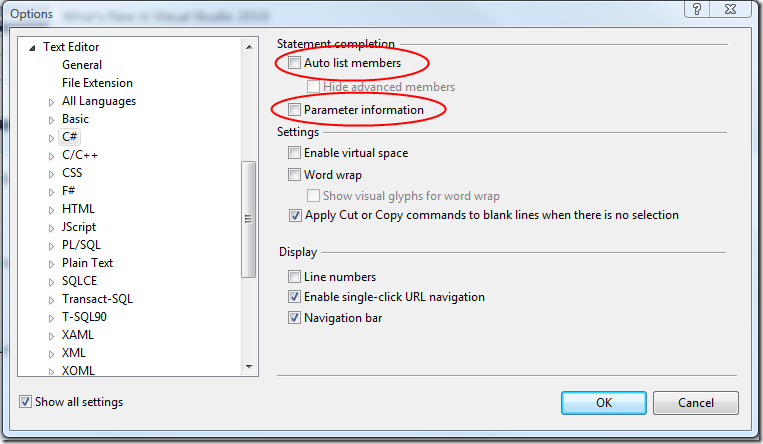 Why does this happen?

The above situation occurs because:

2) Some VS plugins – for example Resharper – turn off the built-in C# code intellisense within VS and instead replace it with their own implementation.  If you’ve installed Resharper on VS 2008, the above VS code IntelliSense profile settings are turned off.  When you import your existing profile during VS 2010’s first time run experience the code IntelliSense settings import over in a disabled state.  If you haven’t installed Resharper on VS 2010 (which is a separate install) – then by default you’ll end up with IntelliSense turned off.

How to Fix this?

Fixing this situation with the VS 2010 RC is pretty easy.  Just do one of two things:

1) Use the Tools->Options menu command, select the Text Editor->C# settings, and then check the two circled check boxes above (Auto-list members and Parameter information).  IntelliSense will then be turned on and work fine.

2) Install the version of Resharper that works with the VS 2010 RC. It then enables IntelliSense using its own mechanism.

We’ve heard reports of a few people running into this – and since the behavior is pretty confusing we are modifying the profile import behavior with the final release of VS 2010 to avoid it.  If a plugin has turned IntelliSense off with VS 2008, by default when you import the profile into VS 2010 we will re-enable it.  This will ensure that on a clean VS 2010 install IntelliSense always works by default.