Windows Azure’s new IaaS and Virtual Networking capabilities make it really easy to enable enterprise development teams to use the cloud to do this.  Using the cloud for dev/test enables development teams to work in a flexible, agile, way without ever being bottlenecked waiting for resources from the IT department.  Development teams can instead use the cloud in a self-service way to spin up or down resources in minutes.  And then when they are ready to deploy their apps they can choose to do so using their existing on-premises servers.  This makes it really easy to start leveraging the cloud even without having to fully bet on it yet for production scenarios.

Today we are announcing a number of enhancements to Windows Azure that make it an even better environment in which to do dev/test:

Below are details on each of the above improvements.  The combination enables an amazing Dev/Test cloud solution, and an unbeatable offer for all MSDN customers.

No Charge for Stopped VMs

Prior to today, when you stopped a VM on Windows Azure we kept a reserved deployment spot for it inside one of our compute clusters, and continued to bill you for the VM compute unless you explicitly deleted the deployment.  Now, with today’s update, when you stop a VM we no longer charge you any compute time for it while it is stopped – yet we still preserve the deployment state and configuration.  This makes it incredibly easy to stop VMs when you aren’t actively using them to avoid billing charges, and then restart them when you want to use them again.

This is great for a variety of scenarios (including production app scenarios).  It is especially useful for Dev/Test scenarios, though, where you often want to cycle down environments in the evenings or on weekends if they aren’t actively being used.  Now you can do so and not incur any hourly billing fees.

Pay by the Minute Billing

Prior to today, our pricing model for compute resources on Windows Azure billed at the per-hour granularity.  This meant if you ran a VM for 6 minutes in an hour and then turned it off, we would still charge you for a full hour of usage.  Now, with today’s update, we are billing at a per-minute granularity.  So if you run a VM (or Cloud Service, or Web Site, or Mobile Service) for only 6 minutes in an hour, we now only charge you for the actual 6 minutes of compute usage (we pro-rate the hourly price – so the billed price is num_minutes * (hr rate)/60).

This is great for a variety of scenarios (including production app scenarios).  It is especially useful for Dev/Test scenario where you are often cycling up/down resources in a very elastic way.  Now you can do so and save more money.

In addition to extending MSDN Use-Rights to Windows Azure, we are also today announcing a fantastic new billing rate for customers who have MSDN subscriptions.  You can now spin up any number of Windows Server, SQL Server, SharePoint Server, and BizTalk Server VMs for Dev/Test scenarios using Windows Azure and pay only 6 cents/hr when running them (or if you run them less than an hour the pro-rated per-minute equivalent).

This enables you to yield massive cost savings for Dev/Test scenarios compared to any other cloud option in the market:

The above savings are available to all MSDN customers – and can applied to any number of Windows Server VMs being used for Dev/Test purposes.  We will automatically apply these savings when you create a VM using one of the standard VM images in the Windows Azure VM Gallery (either through the portal or command-line options like PowerShell) and run it using a new Windows Azure MSDN Subscription.

We are making the above discounted rates even more compelling by also giving every MSDN subscriber up to $150 per month of monetary credits that can be used to run any Windows Azure resource for Dev/Test purposes.  MSDN Professional Subscribers will be provided with $50/month, MSDN Premium Subscribers with $100/month, and MSDN Ultimate Subscribers with $150/month.

These monetary credits can be applied towards any Windows Azure resource being used for Dev/Test purposes.  This includes: Virtual Machines (both Windows and Linux), SQL Databases, Cloud Services, Web Sites, Mobile Services, Hadoop Clusters, BizTalk Services, Storage, Media and more.  The previous per-unit restrictions in place with the old MSDN offer are also being removed – instead you now have a monetary credit that can be applied and mixed/matched on resources however you want.

Below are just a few examples of how a MSDN Premium customer (who will now gets $100/month of credits with their MSDN subscription) could use the monetary credit:

1) A MSDN Premium subscriber can now run 3 Windows Server VMs for 16 hours a day (at 6 cents/hr) every day of the month.  And he or she can run SQL Server Enterprise, BizTalk Server, or SharePoint Server in them using their MSDN use-rights at no additional charge.  And if they ran these 3 VMs for 16 hours a day for 31 days in the month they’d still have $10.32 in credit left over to spend on something else! :-)

2) Alternatively the $100/month credit could be applied towards spinning up 80 Windows Server VMs (with SQL, BizTalk, SharePoint, etc) to use in a load-test for 20 hours:

The above examples provide just a flavor of the different options now available with this program.  The great thing about the monetary credits is that you can use them with any Windows Azure resource – so you have the flexibility to apply them in whatever combination you want.  The credits themselves reset every month (meaning if you are a MSDN Premium customer the credits will reset to $100/month every month).  So every month you also have the opportunity to change how you allocate them however you want.

You can optionally choose to pay additional money on top of the monetary credit (meaning if you need $200 of resources in a month, the MSDN Premium Monetary Credit will cover the first $100 of usage and then you can pay the rest).  Note that any overages will still take advantage of the MSDN Discount Rate (meaning the VMs will only be charged at 6 cents/hr) so you still benefit from a major price discount on that as well.

By default we enable a “spending limit of $0” on MSDN based subscriptions to ensure that customers are never accidentally billed for usage above their MSDN credits.  You can turn this of if you want to use more resources than the built-in credits support and pay for overages.

One of the asks we’ve had in the past from Windows Azure Free Trial and MSDN customers has been for us to enable integrated UI support within the Windows Azure Management Portal that makes it easy for customers to better track where they are with their free credit usage.

Clicking the Credit Status UI will display a summary status within the portal that shows how much credit remains (and how many days until the credit will expire):

Clicking the “View More Details” link in the UI above will then take you to a detailed usage page that shows the usage so far during the month, as well as estimated remaining credit based on current usage patterns: 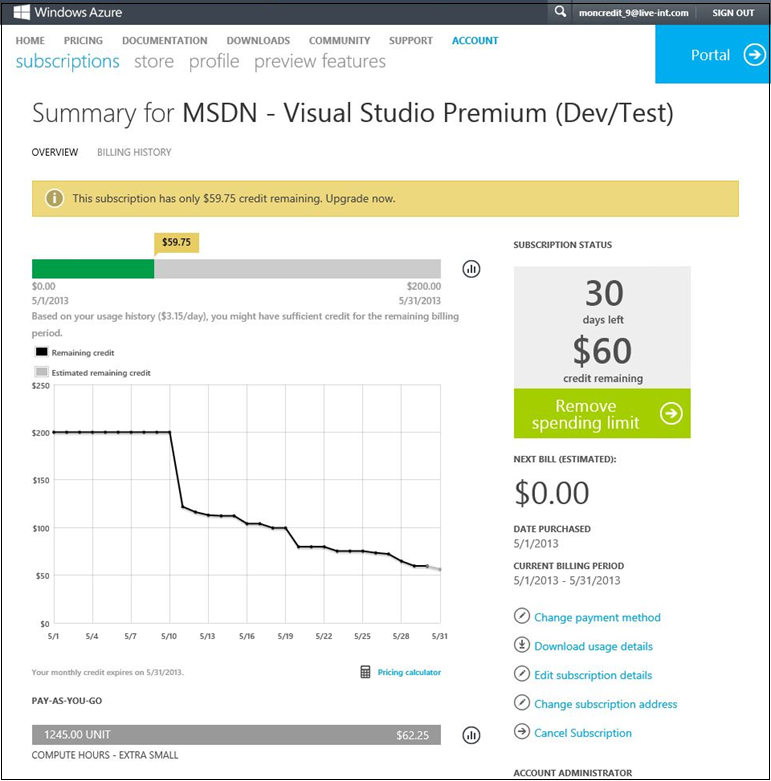 The above support is now available to both MSDN subscription customers as well as those signing up with our Free Trial, and should make it much easier to track free benefit resources.

The above enhancements make Windows Azure a fantastic environment in which to do dev/test, and an unbeatable option for all MSDN customers.  All of these improvements are now available to start using immediately.

If you don’t already have a Windows Azure account, you can sign-up for a free trial and start using all of the above features today.  If you are a MSDN subscriber make sure to sign-up using the same Microsoft ID (formerly LiveID) that is registered with your MSDN subscription.  The Windows Azure sign-up wizard will then detect that you are a MSDN subscriber and automatically setup a subscription with the above improvements for you to use.

If you already have an existing MSDN Subscription on Windows Azure you will be automatically migrated to the new benefits above in August.  If you wish to opt-into using the new benefits before August you can visit the accounts center on the www.windowsazure.com web-site, and next to your subscription you’ll find the option to transfer to it earlier.  If you’d prefer to continue using the existing MSDN benefits offer, you can also optionally opt-out of the automatic conversion and elect to continue to use that for the next 12 months.