Earlier today we shipped the beta of the Windows Phone 7 Developer Tools.  You can download them here. 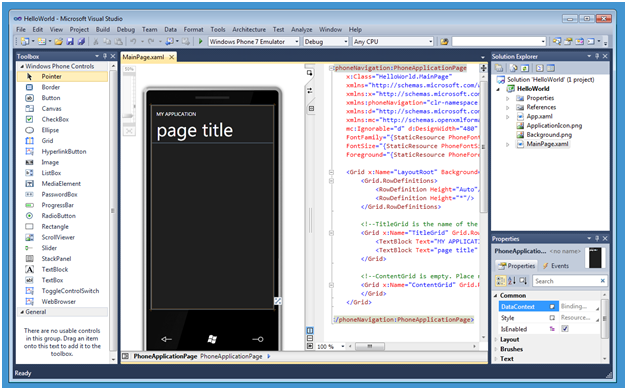 What is included in the Windows Phone Developer Tools

Integrated with the development tools is a phone emulator that enables you to easily develop and test Windows Phone 7 applications on your laptop or desktop machine – without requiring a phone device.  It is hardware accelerated, supports multi-touch events on multi-touch capable monitors, and provides a really easy way to debug and try out your phone applications.

In addition to testing applications within the emulator, we are also this month starting to ship pre-release phones to developers.  You can learn more about this program and sign-up to receive one from this blog post from the Windows Phone 7 team.

Read today’s blog post from the Windows Phone 7 team which provides more details on today’s release. It also mentions two new Silverlight controls – a Panorama and Pivot control - which will enable you to easily implement the new Windows Phone 7 navigation style.  These controls are not implemented in today’s beta, but will be released as an update in a few weeks.

If you have used the previous Windows Phone 7 CTPs, also make sure to read Jaime’s Migrating Applications from the Windows Phone April CTP Refresh to the Beta blog post.  It provides a wealth of details on how to update code that you’ve already written.