There are plenty of tips out on the web that I see no need to repeat here. But this one made such a remarkable difference on my box that I had to post it….

I use the Auto-Hide property on the Toolbox to preserve screen real-estate. After adding the Ajax control toolkit to my environment, the Visual Studio Toolbox started to really drag. Instead of popping up quickly, the hard disk would churn for several seconds and the Toolbox would struggle, agonizingly and with apparently great reluctance, to appear.

When it did eventually appear, random sections of the Toolbox would be open. It didn't remember which tab was last used. Assuming the logic is in a background thread, I can only assume the thread was poorly written. If it was tested, the test results were ignored.

Thank goodness for the TooboxAutoPopulate setting. 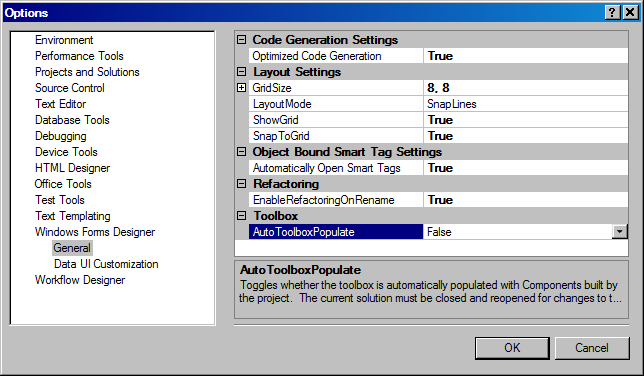 Setting AutoToolboxPopulate to False brought my machine back from the abyss of lost productivity caused by slow, clunky, energy-sapping GUI delays. Although the setting is under Windows Forms Designer, it is just as effective for ASP.Net developers (it's the same Toolbox).

I hope someone finds this helpful.