UPDATE:  The files have been reposted - you will need to make the configuration file changes in two places.  The Trite.vshost.exe.xml and the trite.exe.xml file:

Ok, so I've been playing with this twitter front-end as a way to keep my skills sharp in WPF (and blend).  I have to say that I'm feeling pretty good at the speed at which something can be developed.

I must give credit to FluidKit for a truly AWESOME library of 2d / 3d transform animations. 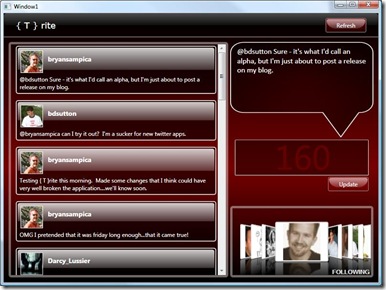 IMPORTANT:  Few things to address before you download and fire up this easily breakable software. :)

You'll need to manually edit the configuration file.  It's located in the directory and it's called Trite.exe but listed as an XML Configuration File.

The settings you'll need to change are all typed in CAPS inside the file.  You should just be able to open it with notepad, if you have problems getting it to run with your edited config, let me know and I'll help you out.