One of the products my company sells is an ASP.NET server control called SmartChart that generates OrgCharts from hierarchical data sources.  Up until recently the vast majority of our sales were to companies in the US so we never worried much about language localization support.  In the back of my mind I always knew we’d need to get to that, but always put it at the bottom of the feature list since it wasn’t overly exciting.  A few days ago we had a customer from France contact us and mention that they really needed to localize some of the strings we display in the control such as Edit, Delete, Insert into other languages for their clients.  I decided it was time to make the update.

There are a lot of articles on localization so I’m not going to explain the overall concept in this post.  Check out the following links if you’re new to the topic and want to know more:

The first solution that I tried to add localization capabilities into the server control was to use the built-in satellite assembly functionality in .NET.  I had worked with these in the past so I started with something I knew. Satellite assemblies allow language resources to be deployed separately from an application’s main .dll providing more flexibility.  Here are the basic steps to create a satellite assembly:

Once the satellite assembly is ready you can use .NET’s ResourceManager class to get to individual keys and their associated values based on a specific language culture (English, French, German, etc.).  Problem is, the test satellite assembly I created didn’t work even though I knew all of the steps were being followed properly.  The localized language strings were never read for some reason.

I considered building my own resource solution specific to my control but after thinking through the options more I realized that the simplest solution would be to leverage the HttpContext object’s static GetGlobalResourceObject method along with ASP.NET’s support for .resx files.  GetGlobalResourceObject allows you to pass in the resource class name (for SmartWebControls.SmartChart.fr-FR.resx the class name would be SmartWebControls.SmartChart) followed by the key that you’d like to retrieve from the resource.

If the customer supplied a localized resource file for a particular culture such as fr-FR or de-DE and placed it in an ASP.NET folder named App_GlobalResources, I would read in the appropriate key value and use it in the server control.  If they didn’t I’d read in my embedded resource values from the default Resources.resx file embedded in the control’s assembly.  An example of what the default Resources.resx file looks like in Visual Studio is shown next: 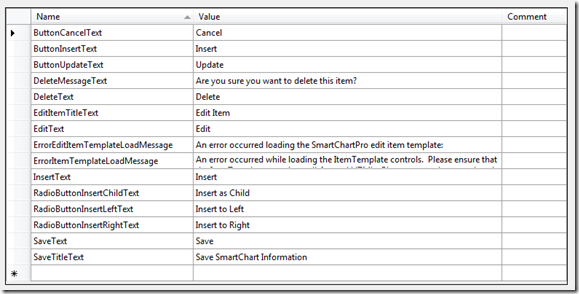 The simple wrapper class named ResourceManager that checks for a customer resource file and resorts to the default file if nothing is found is shown next:


I’m still playing around with it and may ultimately change how it works, but going this route allows customers to use standard .NET .resx files to define localized resources and allows me to access the resource strings easily without writing a custom resource solution.  A definite win-win situation.