I have just received another courier delivered letter from Microsoft's lawyers. That makes a total of 3 letters in 4 working days! I can see how these things can get expensive very quickly. 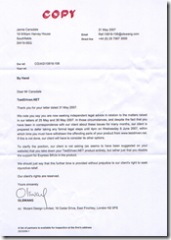 I'd like to highlight a couple of things in the letter.

They say that I have been in correspondence with Microsoft about these issues for many months. What they don't take into account is that in over a year of correspondence - Microsoft consistently refused to tell me which license I was allegedly in violation of.

We may have discussed this at great length, but I was never told what that the "relevant license terms" actually were! I only re-enabled Express support when Microsoft yet again failed to tell me where I was in violation. A straight answer with something I could tell my users would have resolved this.

I'm not sure where on my website this was suggested. It's possible that they're referring  to one of the comments on the last post. They do however bring up an interesting point. The license attached to their first letter was the one for "Visual Studio 2005 Standard and Academic Editions". It didn't matter that the license wasn't the Express SKU license because the wording is the same. What if it turns out that the reason I can't add buttons to Express SKU also applies to Visual Studio 2005? I would then be forced to take down TestDriven.NET entirely. What if it also means I can't use PopFly Explorer for Visual Studio Express? :-(

Update: In the comments I've been asked to post my reply to Microsoft's lawyers.
Update: I have just authorized all comments after being offline for the weekend (a wedding in Scotland). Comment moderation is on to prevent spam. I do not censor comments as has been suggested.