This blog post was a long time coming and fortunately doesn't apply to IIS7, but I thought I would finally take a few minutes and cover this shortcoming with the ASPNET tab that ASP.NET 2.0 introduced into IIS 6 and IIS 5.

When ASP.NET 1.1 was released

When ASP.NET 1.1 was released, the common way to do this was to use aspnet_regiis.exe from the command line.  There was a serious shortcoming with that method though, as I detailed back in December of '03.  (That article and attached script is long overdue for a revision which I'll cover later in this blog post.)  The essence of what I said, and gave a sample script for, is that if you use aspnet_regiis.exe, it will cause an AppDomain recycle on ALL AppDomains on the server, even if you target a single site.  This means that on a production server, it is not safe to use aspnet_regiis outside of a scheduled maintenance window unless you don't mind the impact of an AppDomain recycle.  (for more information on what an AppDomain recycle is and what the impact is, check out this blog post)  The alternate is to change all of the script mappings manually, which properly changes the framework version but has zero impact on other sites on the same server.

When ASP.NET 2.0 was released

When ASP.NET 2.0 was released, Microsoft provided a new tab in IIS called "ASP.NET" as seen in the following screenshot: 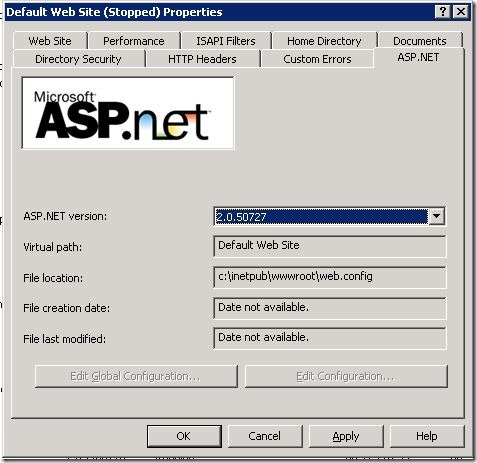 At first this appears to be a welcome addition, and for development computers, it really is.  The issue is this:

The ASP.NET tab in IIS 5 and IIS 6 uses the aspnet_regiis.exe command in the background and, if used, will cause a full AppDomain recycle on the *entire server*.

It's not what most people would expect, and there is no warning provided, so be very careful about this.  In fact, you may survive an AppDomain recycle without having anyone complain.  Therefore, I'm sure oodles of people use this tab on production servers without realizing that they are blowing away InProc session state, causing slow first loads on the pages, and, for sites that take a long time to start up after an AppDomain recycle, possibly causing downtime.

At ORCS Web, when v2.0 came out, I cleaned up the script to handle more than 2 versions of the framework and to I made some other enhancements, but I never got around to blogging about it because there were some features that I wanted to add.  The two features that it's lacking the most are 1) you have to manually enter the site ID rather than getting to pick from a list, and 2) it doesn't support changing the framework version for subfolders.  I kept telling myself I would spend 1/2 a day and finish this, but never got around to it.  So, I'll include it here, and if it interests anyone, feel free to use it.  We've been running it in production for years and it works just great, but it could stand for some further improvements.  You can download it here: Change_Framework_version.zip.  (Note: at ORCS Web we use our own control panel to change the framework version now instead of this script, but it was based on this script)

IIS 7 allows you to set the framework version at the application pool rather than the website.  This change does not cause the server-wide impact and it is safe to do on a production server as long as you realize that the one app pool will have an AppDomain recycle.

In summary, the ASP.NET tab should not be run on a production server except during a maintenance window.  The impact is pretty minor or non-existent for some sites, but it can be pretty bad for other sites.  Just be aware that changing the framework version from the ASP.NET causes an AppDomain recycle on the entire server.  The alternative is to manually change the script mappings which can be done using the script provided above, or manually item by item at the site or application level in IIS.