Microsoft IIS Server has what appears to be an odd default for the application pool recycle time. It defaults to 1740 minutes, which is exactly 29 hours. I’ve always been a bit curious where that default came from. If you’re like me, you may have wondered too.

Wonder no longer! While at the MVP Summit this year in Bellevue WA I had the privilege again of talking with the IIS team. Wade Hilmo was there too. Somehow in the conversation a discussion about IIS default settings came up, which included the odd 1740 minutes for the app pool recycle interval. Wade told the story of how the setting came into being, and he granted me permission to share.

As you can imagine, many decisions for the large set of products produced by Microsoft come about after a lot of deliberation and research. Others have a geeky and fun origin. This is one of the latter. 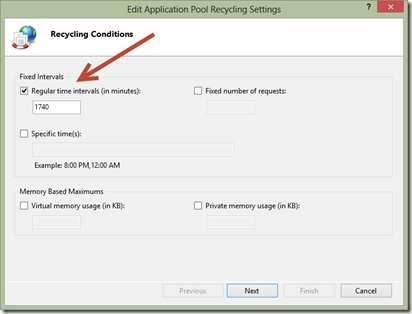 Back when IIS 6 was being developed—which is the version that introduced application pools—a default needed to be set for the Regular Time Interval when application pools are automatically recycled.

Wade suggested 29 hours for the simple reason that it’s the smallest prime number over 24. He wanted a staggered and non-repeating pattern that doesn’t occur more frequently than once per day. In Wade’s words: “you don’t get a resonate pattern”. The default has been 1740 minutes (29 hours) ever since!

That’s a fun little tidbit on the origin of the 1740. How about in your environment though? What is a good default?

First off, I think 29 hours is a good default. For a situation where you don’t know the environment, which is the case for a default setting, having a non-resonate pattern greater than one day is a good idea.

However, since you likely know your environment, it’s best to change this. I recommend setting to a fixed time like 4:00am if you’re on the East coast of the US, 1:00am on the West coast, or whatever seems to make sense for your audience when you have the least amount of traffic. Setting it to a fixed time each day during low traffic times will minimize the impact and also allow you to troubleshoot easier if you run into any issues. If you have multiple application pools it may be wise to stagger them so that you don’t overload the server with a lot of simultaneous recycles.

Note that IIS overlaps the app pool when recycling so there usually isn’t any downtime during a recycle. However, in-memory information (session state, etc) is lost. See this video if you want to learn more about IIS overlapping app pools.

You may ask whether a fixed recycle is even needed. A daily recycle is just a band-aid to freshen IIS in case there is a slight memory leak or anything else that slowly creeps into the worker process. In theory you don’t need a daily recycle unless you have a known problem. I used to recommend that you turn it off completely if you don’t need it. However, I’m leaning more today towards setting it to recycle once per day at an off-peak time as a proactive measure.

My reason is that, first, your site should be able to survive a recycle without too much impact, so recycling daily shouldn’t be a concern. Secondly, I’ve found that even well behaving app pools can eventually have something sneak in over time that impacts the app pool. I’ve seen issues from traffic patterns that cause excessive caching or something odd in the application, and I’ve seen the very rare IIS bug (rare indeed!) that isn’t a problem if recycled daily. Is it a band-aid? Possibly, but if a daily recycle keeps a non-critical issue from bubbling to the top then I believe that it’s a good proactive measure to save a lot of troubleshooting effort on something that probably isn’t important to troubleshoot. However, if you think you have a real issue that is being suppressed by recycling then, by all means, turn off the auto-recycling so that you can track down and resolve your issue. There’s no black and white answer. Only you can make the best decision for your environment.

While on the topic of app pool defaults, there is one more that you should change with every new server deployment. The Idle Time-out should be set to 0 unless you are doing bulk hosting where you want to keep the memory footprint per site as low as possible. 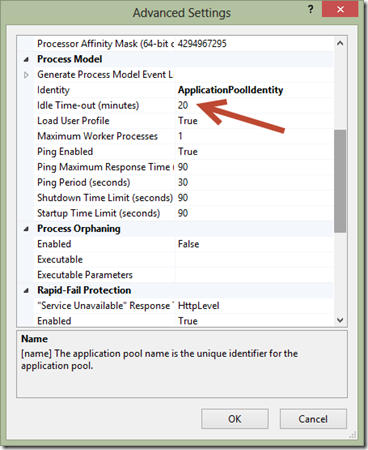 If you have a just a few sites on your server and you want them to always load fast then set this to zero. Otherwise, when you have 20 minutes without any traffic then the app pool will terminate so that it can start up again on the next visit. The problem is that the first visit to an app pool needs to create a new w3wp.exe worker process which is slow because the app pool needs to be created, ASP.NET or another framework needs to be loaded, and then your application needs to be loaded. That can take a few seconds. Therefore I set that to 0 every chance I have, unless it’s for a server that hosts a lot of sites that don’t always need to be running.

There are other settings that can be reviewed for each environment but the two aforementioned settings are the two that should be changed almost every time.

Hopefully you enjoyed knowing about the 29 hour default as much as I did, even if just for fun. Happy IISing.