Bilal Haidar recently did a nice blog post that called out a small but useful new feature on the ListControl base class (which is the base control for a variety of input controls) in ASP.NET 2.0.  Specifically it is a property called "AppendDataBoundItems", and it controls whether the items within an existing list are replaced or appended-to when the control is databound (with ASP.NET 1.1 the items were always replaced).

Here is a simple example of where this comes in handy:

In the above code I'm databinding the unique list of states in the pubs:authors table to an <asp:dropdownlist> control.  For convenience sake I'm using the SqlDataSource control todo this -- although I could alternatively use either the ObjectDataSource to bind it against a class or just manually write code against the control's DataSource property.

What is new in ASP.NET 2.0 is that I can also specify some additional drop-down values -- such as an initial "(Select a State)" value -- that are not part of the databound result.  Because the "AppendDataBoundItems" property is set to true, after databinding I will then have a dropdownlist whose first value is "(Select a State)" -- followed by the unique states currently in the authors table. 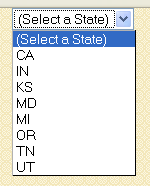 If I wanted to add validation, I could optionally then use a <asp:requiredfieldvalidator> control to point at the <asp:dropdownlist>:

This would then output an error message "Please select a state" if the user tried to submit without choosing something other than the default "(Select a State)" item.  Making them choose a non-default value this way forces them to make a concious choice as to which item to pick.

Special thanks to Bilal for calling out this new feature (I actually didn't know it existed until I read it a few minutes ago <g>),