We are finishing up the final week of work on the feature-complete build of the VS 2005 Web Application Project option.  This build has a ton of new features and functionality, and fixes all of the bugs reported with the last preview.  We are in the process of verifying the build with a number of private beta testers now, and will make it available for everyone to download early next week.

To use it, all you now need to-do is choose the Build->Publish menu item to launch the publish dialog for the web project or solution you are working on: 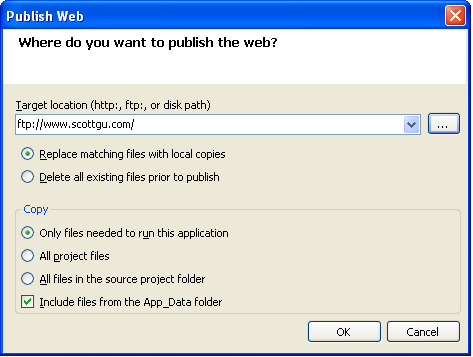 You now have the option of doing incremental file deployments for your web application – where only new and changed files in the project are updated on a server (so if you make a modification to a page, only its .aspx and the .dll in the \bin directory are copied).  It allows you to optionally omit deploying app_data directory files (so you can deploy a SQL Express database once, and not overwrite it on updates unless you want to).  It supports FTP, HTTP, and File-System based deployments (so you can point directly at your remote FTP server if you want).  And it supports copying and deploying files in the background asynchronously for large web solutions (so you don’t have to block on waiting for all the files to be copied).  You can optionally choose to monitor the deployment progress via the output window in VS:

For even richer deployment customization, you can also obviously attach a VS Web Deployment Project and/or VS Web Setup Project (and even chain the three projects together, so that the output of one feeds the next one in the chain).

But for the most common scenarios, though, everything is now built-in to the VS 2005 Web Application Project type and allows super fast deployments and updates.

P.S. One of the other cool feature additions in the new VS 2005 Web Application drop is better support for building a single web-application composed of multiple web projects (where each web project makes up part of the single site or application).  I’ll blog about this feature shortly and some of the cool new things you can do with it that you can’t in VS 2003.