I am very happy to announce that the final release of the VS 2005 Web Application Project is now available.   You can download it for free here.

Because the VS 2005 Web Application Project model has the same conceptual semantics as the VS 2003 Web Project Model, it also makes migrating VS 2003 web projects very, very easy – with zero/minimal code changes required.  To learn how to automatically upgrade a VS 2003 web project using this option, please review these VB and C# tutorials that walkthrough the VS 2003 to VS 2005 upgrade process step-by-step.

Note that the VS 2005 Web Application Project option is available now as a free web download.  It will also be added built-in to VS 2005 SP1, and will be fully supported with Visual Studio releases going forward.

New Features with this final VS 2005 Web Application Project Release

Last month I provided an end-to-end walkthrough example that detailed using the VS 2005 Web Application Project (Release Candidate) to build, develop and publish a new ASP.NET application.  You can review this walkthrough here.

The main feature additions with the final VS 2005 Web Application Release (above and beyond all the features in the release candidate that you can read about here) include:

Available as a separate download is a custom build tool for generating a strongly-typed Profile class for the ASP.NET 2.0 Profile system.  This allows you to right-click on a web.config file containing profile declarations and auto-generate the Profile type into your code-behind project assembly.  You can learn more about this and download it here.

One feature we added into this final release of the VS 2005 Web Application Project option is “edit and continue” support for both VB and C# web applications.  “Edit and Continue” allows developers to modify code while running and debugging an application – without having to stop, recompile and re-launch it.  This is true for both code contained within the web project itself as well as for class library projects that the web project references.  This enables a much more dynamic coding experience.

The below walkthrough demonstrates how you can easily enable and use “edit and continue” with web application projects.

Step 2: Add a Button to an ASP.NET Page

Create a new .aspx page within the project.  Add a button to the .aspx page, and then double click to create an event handler like so in the code-behind file:

Step 3: Enable Edit and Continue for the Web Application Project 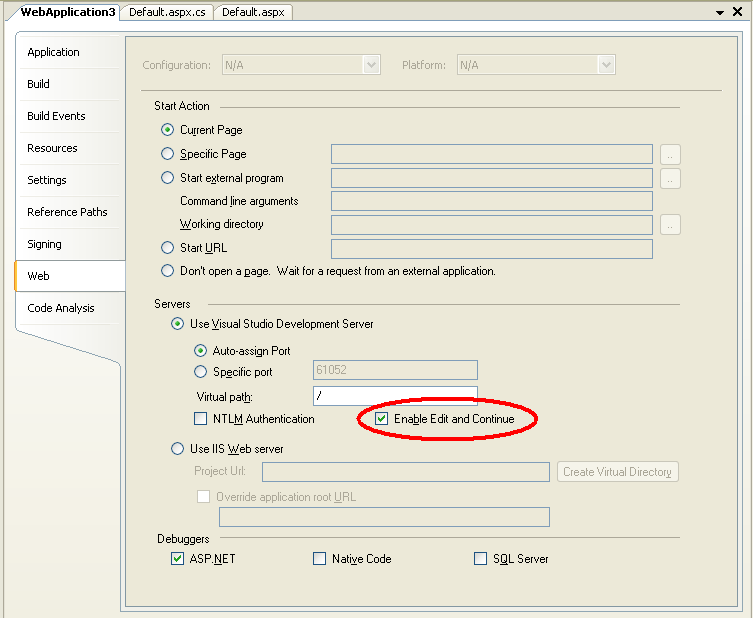 Note that this checkbox can only be enabled when running the application using the built-in VS 2005 Web Server (this is because VS needs to launch the process – and IIS is a service app that doesn’t currently support this).

Run the application in VS by pressing F5 (Run with Debugging) or by hitting the “Run” button.  This will launch the VS 2005 built-in web-server and bring up a browser with a page with the button on it.  Push the button to see the message we programmed above.

Step 5: Set and hit a Breakpoint

Switch back to VS -- without stopping debugging or shutting down the browser – and set a breakpoint on the line of code we wrote above (press F9 to-do this).  Then within the browser push the button again to break in the debugger at that location: 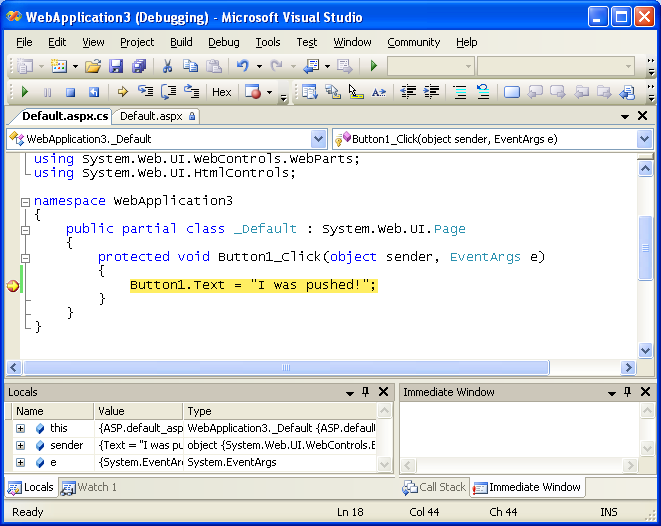 While stopped within the debugger, I can now add or modify any code within this event handler I want.  For example, I could add the following conditional logic to the event handler and modify the Button1.Text statement like so:

And then hit “F5” to continue running the app and immediately see the changes:

There is no need to stop or recompile the application for these types of changes (you’ll notice I was also using FireFox to run the app just for additional fun <g>).

Note that you can also use Edit and Continue support within Class Library projects consumed by a Web Application Project (as well as obviously standalone classes within the project).  For example: you could modify the method of a class within a class library project that is being called by an ASP.NET page.

The one constraint of using edit and continue within web projects is that you can’t perform any operations that will cause a restart of the application’s app-domain (for example: modifying the web.config file).  Doing so will require you to re-launch the debugger session to see code changes applied.  Note that code changes in a class library project or within the web project don’t cause the app-domain to be restarted while running under the debugger – so these types of code changes are just fine.

A page containing known issues for this release of the VS 2005 Web Application Projects can be found here (for example: two features that won’t be added until the SP1 release are support for the new Report Designer Controls and Mobile Web Form Pages).  We will also be publishing several additional whitepapers over the next few weeks that go into more details about how to use the VS 2005 Web Application Project option and answer common questions.

This final release of the VS 2005 Web Application Project does require you to install a publicly available patch for VS 2005 before you install the VS 2005 Web Project template support.  Unfortunately only the VS English version of the patch is currently available – we are actively working on the non-English SKU editions of VS now (note: you can use the English version of VS on a non-English version of Windows -- that is supported by the patch now).  There is a workaround that we discuss in the known-issues/readme link above that you can use if you want to install it immediately (basically you install an English version of VS on your machine to install the patch, and then switch the language back).  We will be publishing a blog post about this in the next week or two that provides more details on how to-do this, and then obviously the non-English patches of VS when they are ready in a few weeks time.

Hope this helps – and thanks for your patience over the last few months,

P.S. If you have a release candidate or beta build of the VS 2005 Web Application Project already installed, you can simple shut-down VS and then uninstall that old version, and then install the final release.