Two of these releases - ASP.NET MVC 3 Beta and WebMatrix Beta 2 - are evolutions of projects we first previewed this summer.  The third – NuPack - is a new project that I’m particularly excited about.

NuPack is a free open source package manager that makes it easy for you to find, install, and use .NET libraries in your projects. It works with all .NET project types (including, but not limited to, both ASP.NET Web Forms and ASP.NET MVC).

NuPack enables developers who maintain open source projects (for example, projects like Moq, NHibernate, Ninject, StructureMap, NUnit, Windsor, RhinoMocks, Elmah, etc) to package up their libraries and register them with an online gallery/catalog that is searchable.  The client-side NuPack tools – which include full Visual Studio integration – make it trivial for any .NET developer who wants to use one of these libraries to easily find and install it within the project they are working on.

NuPack handles dependency management between libraries (for example: library1 depends on library2). It also makes it easy to update (and optionally remove) libraries from your projects later. It supports updating web.config files (if a package needs configuration settings). It also allows packages to add PowerShell scripts to a project (for example: scaffold commands). Importantly, NuPack is transparent and clean – and does not install anything at the system level. Instead it is focused on making it easy to manage libraries you use with your projects.

NuPack is itself an open-source project.  The Outercurve Foundation (formerly CodePlex Foundation) today announced the acceptance of the NuPack project to the ASP.NET Open Source Gallery.  Developers - both inside and outside Microsoft – will contribute features, bug fixes and patches to NuPack.

Our goal with NuPack is to make it as simple as possible to integrate open source libraries within .NET projects.  It will be supported in all versions of Visual Studio.  You can start using the first developer preview of it today.

As a simple example to show off what NuPack enables – let’s assume we are working on a brand new ASP.NET application and want to use the popular open-source “ELMAH” library to log and report errors with our site.  To install ELMAH today, you’d need to manually download it, unzip it, add a reference to your project, make sure you have source control bindings for the library setup correctly, and update the web.config file of your application to include the Elmah HttpModule entries.  All doable – but a little tedious.

With NuPack installed, you can simply open the new “Package Manager Console” that NuPack enables inside VS and type “Add-Package elmah” within it: 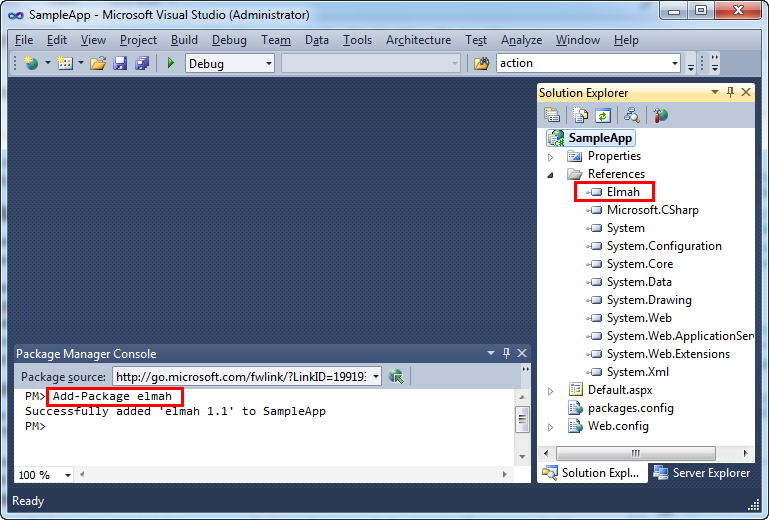 Typing "Add-Package elmah” causes NuPack to check an online feed to locate the Elmah library, download it, add a reference of it to your current project, and automatically add the appropriate Elmah registration entries within your application’s web.config file: 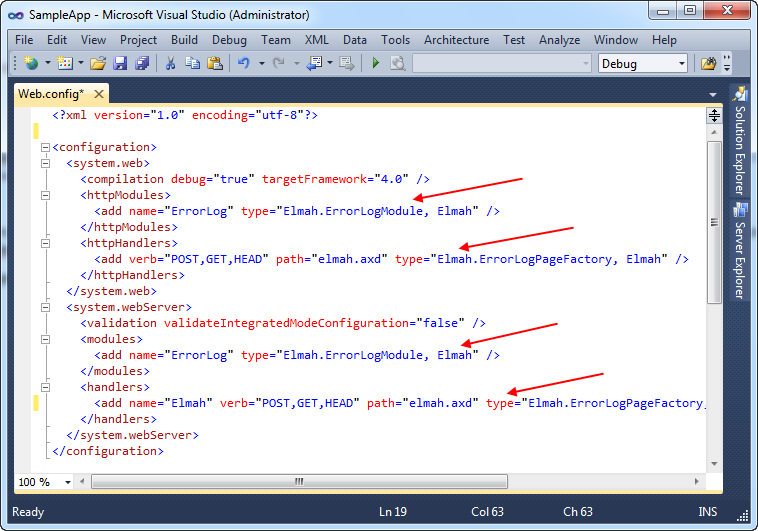 And now we have Elmah setup and installed for our project, and error report logging enabled.  No additional manual steps required to make it work.

Check out the following links to learn more about NuPack and some of the many scenarios it enables:

We think NuPack will be a fundamental component of the .NET stack going forward.  It will encourage more .NET developers to use open-source libraries.  Having a standard package manager integrated into millions of copies of Visual Studio will hopefully also encourage the creation of more open source projects with .NET.

Today we are also shipping a Beta Release of ASP.NET MVC 3.  This release is a significant update of the ASP.NET MVC 3 Preview we shipped two months ago, and includes a bunch of great feature improvements.

In addition to the ASP.NET MVC 3 features introduced with the first preview, today’s beta includes:

The ASP.NET MVC 3 beta supports “go-live” deployments – which means the license does not restrict you from building and deploying production applications with it.

Check out the below links to learn more about the ASP.NET MVC 3 Beta:

Alternatively you can download and install the ASP.NET MVC 3 Beta using a standalone installer here (note: for today’s beta you need to first install the AspNetWebPages.msi link from that page and then the AspNetMVC3Setup.exe file).

Today we are also shipping WebMatrix Beta 2.  This release is an update of the WebMatrix Beta 1 preview we shipped this summer, and includes a number of great feature improvements.

In addition to the WebMatrix features introduced with the first beta, today’s Beta 2 release includes:

Today’s releases further evolve and enhance the Microsoft Web Stack.  All of the above capabilities work with .NET 4 and VS 2010, and do not modify any existing files that ship with it (they are all additive and safe to install on your machine).

I’ll be blogging more details about some of the above improvements in the weeks ahead.