This is another in a series of posts I’m doing that cover some of the new ASP.NET MVC 3 features:

In today’s post I’m going to discuss how Razor enables you to both implicitly and explicitly define code nuggets within your view templates, and walkthrough some code examples of each of them.

ASP.NET MVC 3 ships with a new view-engine option called “Razor” (in addition to the existing .aspx view engine).  You can learn more about Razor, why we are introducing it, and the syntax it supports from my Introducing Razor blog post.

Razor minimizes the number of characters and keystrokes required when writing a view template, and enables a fast, fluid coding workflow. Unlike most template syntaxes, you do not need to interrupt your coding to explicitly denote the start and end of server blocks within your HTML. The Razor parser is smart enough to infer this from your code. This enables a compact and expressive syntax which is clean, fast and fun to type.

For example, the Razor snippet below can be used to iterate a collection of products and output a <ul> list of product names that link to their corresponding product pages:

When run, the above code generates output like below: 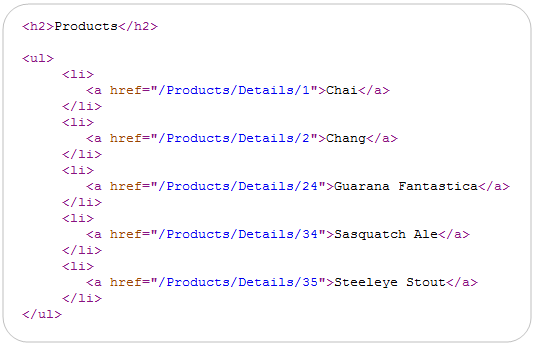 Notice above how we were able to embed two code nuggets within the content of the foreach loop.  One of them outputs the name of the Product, and the other embeds the ProductID within a hyperlink.  Notice that we didn’t have to explicitly wrap these code-nuggets - Razor was instead smart enough to implicitly identify where the code began and ended in both of these situations.

Razor does not define its own language.  Instead, the code you write within Razor code nuggets is standard C# or VB.  This allows you to re-use your existing language skills, and avoid having to learn a customized language grammar.

The Razor parser has smarts built into it so that whenever possible you do not need to explicitly mark the end of C#/VB code nuggets you write.  This makes coding more fluid and productive, and enables a nice, clean, concise template syntax.  Below are a few scenarios that Razor supports where you can avoid having to explicitly mark the beginning/end of a code nugget, and instead have Razor implicitly identify the code nugget scope for you:

Razor allows you to output a variable value, or a sub-property on a variable that is referenced via “dot” notation:

You can also use “dot” notation to access sub-properties multiple levels deep:

Razor allows you to index into collections or arrays:

Notice how for all of the scenarios above how we did not have to explicitly end the code nugget.  Razor was able to implicitly identify the end of the code block for us.

The below algorithm captures the core parsing logic we use to support “@” expressions within Razor, and to enable the implicit code nugget scenarios above:

Step 3.1 is a particularly interesting part of the above algorithm, and enables Razor to differentiate between scenarios where an identifier is being used as part of the code statement, and when it should instead be treated as static content:

Notice how in the snippet above we have ? and ! characters at the end of our code nuggets.  These are both legal C# identifiers – but Razor is able to implicitly identify that they should be treated as static string content as opposed to being part of the code expression because there is whitespace after them.  This is pretty cool and saves us keystrokes.

Razor is smart enough to implicitly identify a lot of code nugget scenarios.  But there are still times when you want/need to be more explicit in how you scope the code nugget expression.  The @(expression) syntax allows you to do this:

You can write any C#/VB code statement you want within the @() syntax.  Razor will treat the wrapping () characters as the explicit scope of the code nugget statement.  Below are a few scenarios where we could use the explicit code nugget feature:

You can perform arithmetic calculations within an explicit code nugget:

You can use the explicit expression syntax to append static text at the end of a code nugget without having to worry about it being incorrectly parsed as code:

Above we have embedded a code nugget within an <img> element’s src attribute.  It allows us to link to images with URLs like “/Images/Beverages.jpg”.  Without the explicit parenthesis, Razor would have looked for a “.jpg” property on the CategoryName (and raised an error).  By being explicit we can clearly denote where the code ends and the text begins.

Explicit expressions also allow us to use generic types and generic methods within code expressions – and enable us to avoid the <> characters in generics from being ambiguous with tag elements.

One More Thing….Intellisense within Attributes

We have used code nuggets within HTML attributes in several of the examples above.  One nice feature supported by the Razor code editor within Visual Studio is the ability to still get VB/C# intellisense when doing this.

Below is an example of C# code intellisense when using an implicit code nugget within an <a> href=”” attribute: 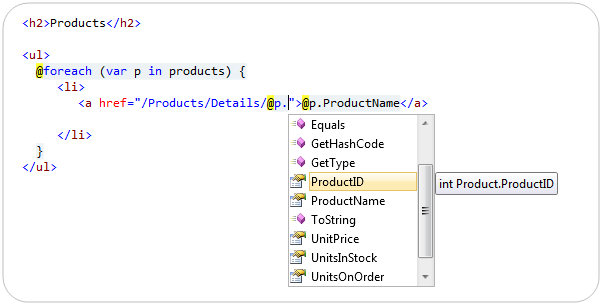 Below is an example of C# code intellisense when using an explicit code nugget embedded in the middle of a <img> src=”” attribute:

Notice how we are getting full code intellisense for both scenarios – despite the fact that the code expression is embedded within an HTML attribute (something the existing .aspx code editor doesn’t support).  This makes writing code even easier, and ensures that you can take advantage of intellisense everywhere.

Razor enables a clean and concise templating syntax that enables a very fluid coding workflow.  Razor’s ability to implicitly scope code nuggets reduces the amount of typing you need to perform, and leaves you with really clean code.

When necessary, you can also explicitly scope code expressions using a @(expression) syntax to provide greater clarity around your intent, as well as to disambiguate code statements from static markup.