This past December we released the first preview of a new ASP.NET MVC Framework as part of the ASP.NET 3.5 Extensions CTP Release. I also wrote a number of blog posts that provide more detail on what the ASP.NET MVC framework is and how you can optionally use it:

We've had great feedback on the framework since then, and had a ton of downloads and excitement around it.  One of the common questions people have asked me recently is "when will a new build be released and what will be in it?".

The below post provides a few updates on what the ASP.NET MVC feature team has been working on, and some of the new features that will be available soon.  I'm going to do a separate blog post in the future that will cover the new ASP.NET Dynamic Data and ASP.NET AJAX feature work that is progressing along nicely as well.

All of these features (ASP.NET MVC, ASP.NET Dynamic Data, and the new ASP.NET AJAX improvements) will ship later this year and work with VS 2008 and .NET 3.5.

We are planning to release the next public preview of ASP.NET MVC at the MIX 08 conference in a few weeks.  This build will be available for anyone on the web to download (you do not need to attend MIX to get it).  We have incorporated a lot of early adopter feedback into this release.  Below are some of the improvements that will appear with this next preview release:

1) The ASP.NET MVC Framework can be deployed in the \bin directory of an app and work in partial trust

The first ASP.NET MVC preview release required a setup program to be run on machines in order for the System.Web.Mvc.dll assembly to be registered in the machine's GAC (global assembly cache).

Starting with this upcoming preview release we will enable applications to instead directly reference the System.Web.Mvc.dll assembly from the application's \bin directory.  This means that no setup programs need to be run on a sever to use the ASP.NET MVC Framework - you can instead just copy your application onto a remote ASP.NET server and have it run (no registration or extra configuration steps required).

We are also doing work to enable the ASP.NET MVC framework to run in "partial/medium trust" hosting scenarios.  This will enable you to use it with low-cost shared hosting accounts - without requiring the hosting provider to-do anything to enable it (just FTP your application up and and it will be good to run - they don't need to install anything).

One of the most powerful features of the ASP.NET MVC framework is its URL routing engine (I covered some of these features here).

We have also factored out the URL routing infrastructure from the rest of the MVC framework with this preview, which enables us to use it for other non-MVC features in ASP.NET (including ASP.NET Dynamic Data and ASP.NET Web Forms).

This upcoming ASP.NET MVC preview release will ship with improved VS 2008 integration.  This includes better project item templates, automatic project default settings, etc.  We are also adding a built-in "Test Framework" wizard that will automatically run when you create a new ASP.NET MVC Project via the File->New Project dialog.  This will enable you to easily name and wire-up a unit test project for your ASP.NET MVC application.

The ASP.NET MVC test framework wizard is pluggable and will enable custom unit test project templates to be added to its list of supported test options: 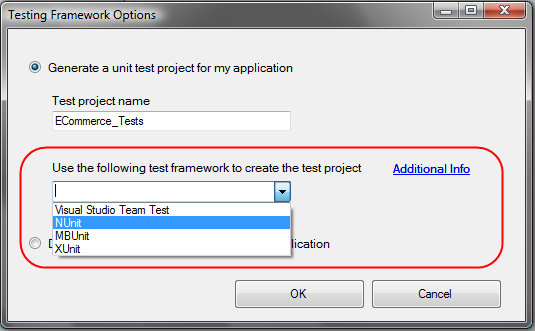 This will enable developers to easily choose whichever unit testing framework (and associated mocking and dependency injection options) they prefer to use.

The first ASP.NET MVC preview release required action methods on Controller classes to be explicitly marked with a [ControllerAction] attribute to be callable: 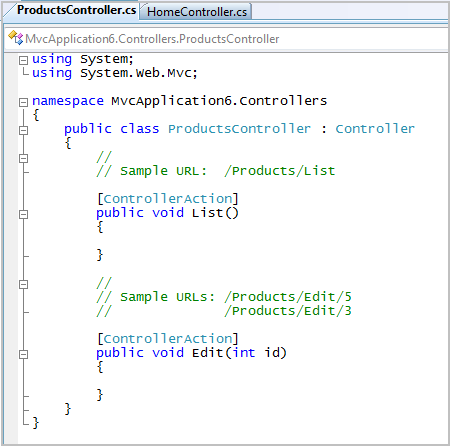 Based on early-adopter feedback, the upcoming ASP.NET MVC release removes this requirement.  Instead by default all public methods on a Controller will now be considered Action methods: 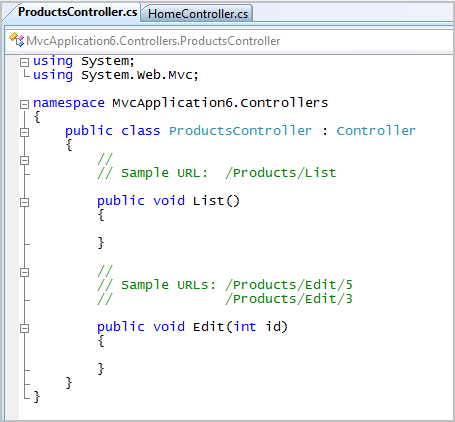 Note: You can optionally add attributes to block public methods on your Controller from being callable as actions if you want/need to add a public non-action method on it.

One of the new extensibility features enabled with this next ASP.NET MVC release is a feature called "Filter Attributes".  These enable you to inject code interceptors into the request of a MVC controller that can execute before and after a Controller or its Action methods execute.  This capability enables some nice encapsulation scenarios where you can package-up and re-use functionality in a clean declarative way.

For example, I could use an [OutputCache] filter attribute to output cache my product listing page for 30 seconds at a time:

Or use an [Authorization] filter attribute to ensure that only people within a specific security role are allowed to Edit a product:

The filter mechanism is extensible, and you can easily create your own custom filter attributes for Controller classes or Action methods with it.  Filters (and controllers/actions that use filters) can be fully unit tested.

The first ASP.NET MVC preview had only a few HTML UI helper methods built-into the core assembly.  We then shipped a separate download that included a bunch of additional HTML helper methods you could optionally use.

This upcoming ASP.NET MVC preview now has these HTML helper methods built-in (no separate download required).  Next month we are also going to start to talk about some of the new enhancements to the client-side ASP.NET AJAX libraries we are making, as well as some of the AJAX helper methods we will build to enable it to easily integrate with ASP.NET MVC.

7) Lots of Refactoring and Design Improvements

This upcoming ASP.NET MVC preview includes several refactoring and design improvements that make the MVC framework more extensible and testable.  In general the team has followed a philosophy where for all features you have three options:

For example: you can now override the ViewEngine locator logic without having to override the ViewEngine execution logic (and vice-versa) - or alternatively swap out ViewEngines entirely.  The Controller Factory support has been extended to make it even easier to integrated with dependency injection frameworks.  Route rules are now fully extensible.  Controllers are more easily testable, etc.

8) Downloadable ASP.NET MVC Framework Source that can be Built and Patched

Last month I announced that the .NET Framework source code can now be downloaded and debugged.  Ultimately once it ships the ASP.NET MVC framework will be available via this mechanism as well (just like the rest of the ASP.NET source code).

The license won't enable you to redistribute your patched version of ASP.NET MVC (we want to avoid having multiple incompatible ASP.NET MVC versions floating around and colliding with each other).  But it will enable developers who want to get started building ASP.NET MVC applications immediately to make progress - and not have to worry about getting blocked by an interim bug that they can't work around.

There are a bunch of other changes that will show up with the next ASP.NET MVC Preview (including a number of helper properties/methods/objects).  Hopefully the above list provides some insight into a few of the bigger improvements that will appear shortly.  I'll do a blog post around MIX with a pointer to the updated preview once it is available for download.