This is the sixteenth in a series of blog posts I’m doing on the upcoming VS 2010 and .NET 4 release.

Today’s post is the first of a few blog posts I’ll be doing that talk about some of the important changes we’ve made to make Web Forms in ASP.NET 4 generate clean, standards-compliant, CSS-friendly markup.  Today I’ll cover the work we are doing to provide better control over the “ID” attributes rendered by server controls to the client.

One of the common complaints developers have often had with ASP.NET Web Forms is that when using server controls they don’t have the ability to easily generate clean, CSS-friendly output and markup.  Some of the specific complaints with previous ASP.NET releases include:

ASP.NET 4 provides better support for building standards-compliant pages out of the box.  The built-in <asp:> server controls with ASP.NET 4 now generate cleaner markup and support CSS styling – and help address all of the above issues.

A common question people often ask when hearing about the cleaner markup coming with ASP.NET 4 is “Great - but what about my existing applications?  Will these changes/improvements break things when I upgrade?”

To help ensure that we don’t break assumptions around markup and styling with existing ASP.NET Web Forms applications, we’ve enabled a configuration flag – controlRenderingCompatibilityVersion – within web.config that let’s you decide if you want to use the new cleaner markup approach that is the default with new ASP.NET 4 applications, or for compatibility reasons render the same markup that previous versions of ASP.NET used: 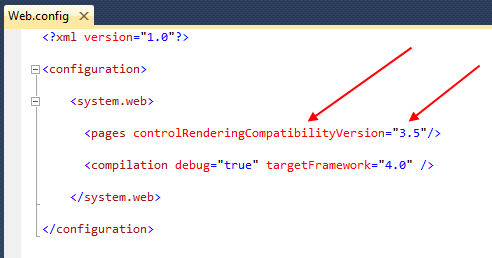 This flag defaults to 4.0 for all new ASP.NET Web Forms applications built using ASP.NET 4. Any previous application that is upgraded using VS 2010 will have the controlRenderingCompatibilityVersion flag automatically set to 3.5 by the upgrade wizard to ensure backwards compatibility.  You can then optionally change it (either at the application level, or scope it within the web.config file to be on a per page or directory level) if you move your pages to use CSS and take advantage of the new markup rendering.

The ability to have clean, predictable, ID attributes on rendered HTML elements is something developers have long asked for with Web Forms (ID values like “ctl00_ContentPlaceholder1_ListView1_ctrl0_Label1” are not very popular).  Having control over the ID values rendered helps make it much easier to write client-side JavaScript against the output, makes it easier to style elements using CSS, and on large pages can help reduce the overall size of the markup generated.

The ClientIDMode property can be set directly on individual controls (or within container controls – in which case the controls within them will by default inherit the setting):

Or it can be specified at a page or usercontrol level (using the <%@ Page %> or <%@ Control %> directives) – in which case controls within the pages/usercontrols inherit the setting (and can optionally override it):

Or it can be set within the web.config file of an application – in which case pages within the application inherit the setting (and can optionally override it): 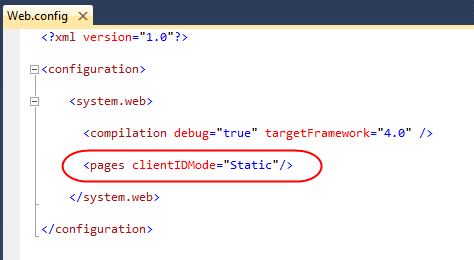 This gives you the flexibility to customize/override the naming behavior however you want.

Example: Using the ClientIDMode property to control the IDs of Non-List Controls

Let’s take a look at how we can use the new ClientIDMode property to control the rendering of “ID” elements within a page.  To help illustrate this we can create a simple page called “SingleControlExample.aspx” that is based on a master-page called “Site.Master”, and which has a single <asp:label> control with an ID of “Message” that is contained with an <asp:content> container control called “MainContent”:

Within our code-behind we’ll then add some simple code like below to dynamically populate the Label’s Text property at runtime:

If we were running this application using ASP.NET 3.5 (or had our ASP.NET 4 application configured to run using 3.5 rendering or ClientIDMode=AutoID), then the generated markup sent down to the client would look like below:

This ID is unique (which is good) – but rather ugly because of the “ct100” prefix (which is bad).

Markup Rendering when using ASP.NET 4 and the ClientIDMode is set to “Predictable”

With ASP.NET 4, server controls by default now render their ID’s using ClientIDMode=”Predictable”.  This helps ensure that ID values are still unique and don’t conflict on a page, but at the same time it makes the IDs less verbose and more predictable.  This means that the generated markup of our <asp:label> control above will by default now look like below with ASP.NET 4:

Notice that the “ct100” prefix is gone. Because the “Message” control is embedded within a “MainContent” container control, by default it’s ID will be prefixed “MainContent_Message” to avoid potential collisions with other controls elsewhere within the page.

Markup Rendering when using ASP.NET 4 and the ClientIDMode is set to “Static”

Sometimes you don’t want your ID values to be nested hierarchically, though, and instead just want the ID rendered to be whatever value you set it as.  To enable this you can now use ClientIDMode=static, in which case the ID rendered will be exactly the same as what you set it on the server-side on your control.  This will cause the below markup to be rendered with ASP.NET 4:

This option now gives you the ability to completely control the client ID values sent down by controls.

Example: Using the ClientIDMode property to control the IDs of Data-Bound List Controls

Data-bound list/grid controls have historically been the hardest to use/style when it comes to working with Web Form’s automatically generated IDs.  Let’s now take a look at a scenario where we’ll customize the ID’s rendered using a ListView control with ASP.NET 4.

The code snippet below is an example of a ListView control that displays the contents of a data-bound collection — in this case, airports:

We can then write code like below within our code-behind to dynamically databind a list of airports to the ListView above:

At runtime this will then by default generate a <ul> list of airports like below.  Note that because the <ul> and <li> elements in the ListView’s template are not server controls, no IDs are rendered in our markup: 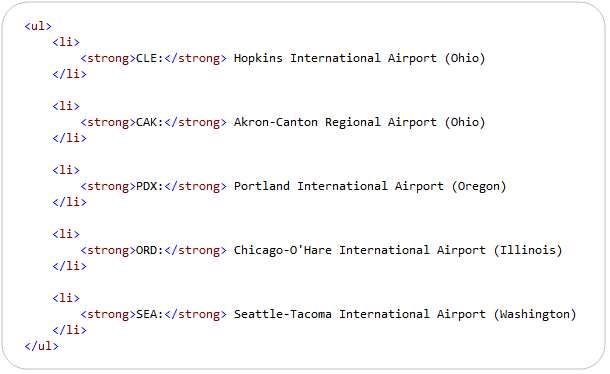 Now, let’s say that we wanted to add client-ID’s to the output so that we can programmatically access each <li> via JavaScript.  We want these ID’s to be unique, predictable, and identifiable.

A first approach would be to mark each <li> element within the template as being a server control (by giving it a runat=server attribute) and by giving each one an id of “airport”:

By default ASP.NET 4 will now render clean IDs like below (no ctl001-like ids are rendered): 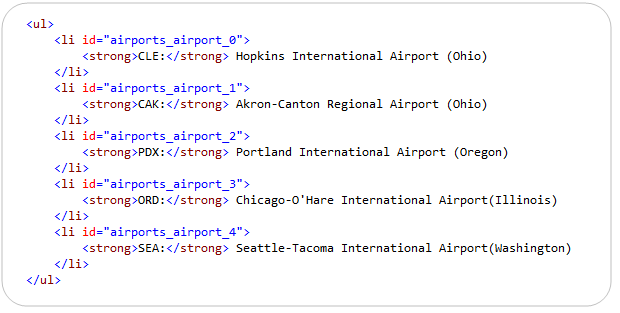 Our template above now generates unique ID’s for each <li> element – but if we are going to access them programmatically on the client using JavaScript we might want to instead have the ID’s contain the airport code within them to make them easier to reference.  The good news is that we can easily do this by taking advantage of the new ClientIDRowSuffix property on databound controls in ASP.NET 4 to better control the ID’s of our individual row elements.

To do this, we’ll set the ClientIDRowSuffix property to “Code” on our ListView control.  This tells the ListView to use the databound “Code” property from our Airport class when generating the ID:

You can use this ClientIDRowSuffix approach with other databound controls like the GridView as well. It is useful anytime you want to program row elements on the client – and use clean/identified IDs to easily reference them from JavaScript code.

ASP.NET 4 enables you to generate much cleaner HTML markup from server controls and from within your Web Forms applications.

In today’s post I covered how you can now easily control the client ID values that are rendered by server controls.  In upcoming posts I’ll cover some of the other markup improvements that are also coming with the ASP.NET 4 release.